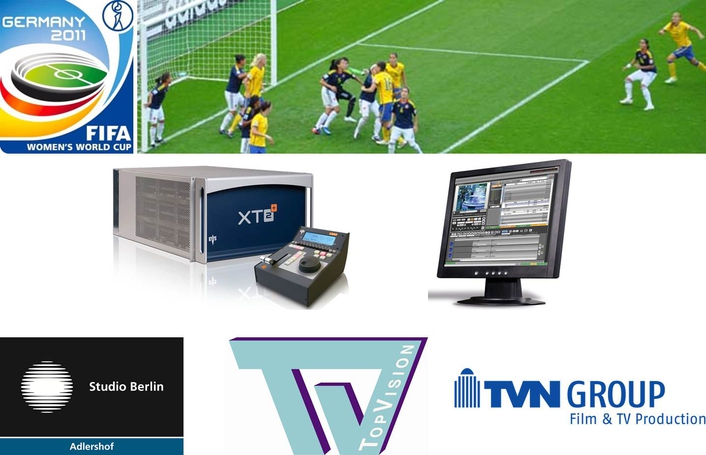 From June 26th to July 17th, The FIFA Women’s World Cup 2011 in Germany is on the edge of marking a milestone in competitive women’s football with first rate television coverage in terms of production and distribution.  This is a major step in women’s football competition to be on par with men’s tournaments when it comes to broadcasting. The event’s host broadcaster HBS requires EVS technology for all live replays and live editing operations of matches managed by multiple OB facilities involving German TopVision, Studio Berlin and TVN.

All systems are managed by IPDirector, EVS’ production content management system, which allows reviewing and smooth handling of all recorded media and key sequences. The system is used to exchange files transparently via Avid and Apple FCP editing suite for advanced montage.

Initially introduced by HBS in Johannesburg last summer, the Epsio live graphic analysis system has been added to the live OB setup for the replay of litigious actions involving offside positions of players. Integrated to the XT system and controlled by the LSM remote controller, Epsio manages an auto-detection of the playing field with autographic overlay creation, allowing operators to draw a line in under 5 seconds showing the offside positions of players.

Pierre L’Hoest, CEO of EVS “HBS and EVS have been working closely together for over 10 years providing the sports broadcasting market with technological solutions that answer the most demanding requirements during live event operations.” He adds: “This strong collaboration between a world class host broadcast event specialist and a leader in live sports broadcast technology has led to a cross-fertilization of live event productions offering even better content creation at a faster pace and increased efficiency.”