.
As the 2014 FIFA World Cup Brazil™ gets under way, EUROVISION is mounting its largest ever broadcast services operation, enabling viewers worldwide to experience all the action during the tournament on and off the pitch.

HD signals of all 64 games from 12 different stadiums around the country will be distributed to rightsholders throughout the month-long event.

For the first time, 3 games including the final will be broadcast in 4K resolution, or ultra-high definition, using EUROVISION's global network. EUROVISION is also assisting broadcasters to deliver match commentary to millions of viewers worldwide by providing data lines via satellite. 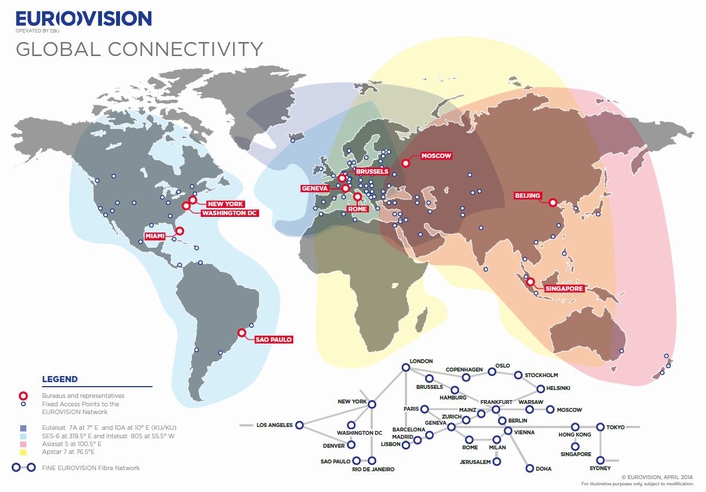 Content will also be carried via EUROVISION's fibre optic FiNE network in which 10 GB/s circuits will carry over 120 video services from the various venues to the rightsholders and over 30 return feeds in addition to other data and control circuits.

Some services will be distributed via satellite from Brazil and via fibre feeds to the EUROVISION Hypermux ultra-high efficiency multiplex platform. Hypermux increases the transmission capacity of EUROVISION’s satellite transponders and boosts network efficiency by more than 25%, while also increasing flexibility and security.

Graham Warren, Director of Network for EUROVISION said: "This is the biggest and most complicated broadcast operation EUROVISION has ever undertaken."

He added, "We are proud to be bringing the world's largest football event, and surrounding activities, to millions of homes around the world."

EUROVISION Special Events is providing a full range of production and transmission services for broadcasters to transmit live or feed recorded material in HD & SD from 10 different locations in Brazil, each outside the official FIFA exclusive zones reserved for rightsholders only.

There will also be a mobile feed point to assist broadcasters to cover breaking news throughout the tournament.

EUROVISION will also facilitate satellite and fibre transmissions from numerous national base camps including those belonging to the teams from Germany, Italy, Portugal, the Netherlands, France and Belgium.