United’s OB14 and its winning formula with mc²66 and V__pro8
Following the ambitious broadcast of the Coronation of King Willem-Alexander, the United OB14 mobile truck was in action again at the 2013 UEFA Europe League in Amsterdam’s ArenA.

The truck – equipped with its Lawo mc²66 digital broadcast console and DALLIS I/O system – found itself at the centre of another mission critical international broadcast. This time it was of the Chelsea-Benfica encounter on May 15th awaited by a worldwide audience, where United provided the live audio feed to the event’s TV Compound to accompany the 35-camera production that was provided to 15 visiting major sports broadcasters in 5.1 surround.

An essential part of the audio operation were the Lawo’s audio-follow-video (AfV) function and VSM (Virtual Studio Manager) control software from L-S-B Broadcast, which is integrated into the OB14 console and enables the direct assignment of AfV events to the camera tallies.

‘These AfV audio sources were each routed to a subgroup, so effectively there was one fader to control how much detail of the camera mics could be heard in the mix,’ United’s Jeroen ‘Huub’ Lelieveld explains. ‘This software controls all equipment in the truck, and opens the faders assigned to specific cameras. 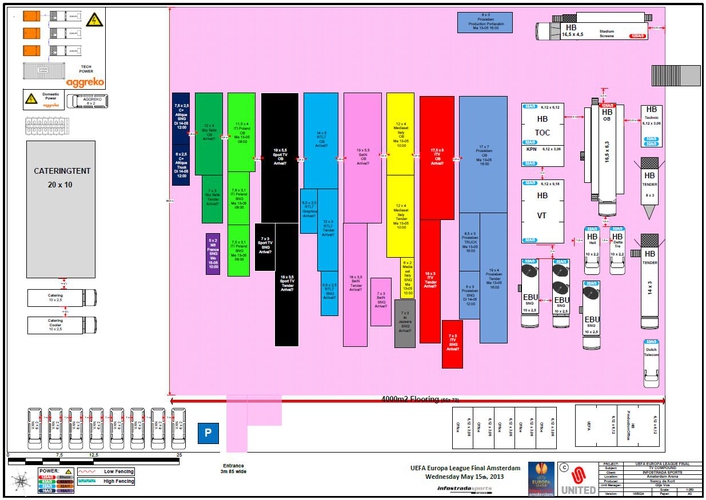 Lelieveld’s United colleague Mischa Kortleve mixed the action from the field, while he watched the video line cut and controlled how much surround atmosphere and AfV sounds were added to the mix, making sure that the sound matched the ‘feel’ of the picture.

‘We created three video feeds, each with different pictures and – at some point – different cameras and interview/stand up positions,’ Lelieveld says. ‘VSM is able to create different virtual GPIs for different video outputs, so while we concentrated on mixing the main feed, the other two feeds were mixed automatically, with different faders being triggered by the video mixer.

In addition to the de/embedder cards in the OB14 mobile’s mc266, the console is partnered with a Lawo V__pro 8, which offers video bridging facilities – decoding signals from different formats, then transforming them to another.

‘We had a total of six outgoing feeds with Dolby E and another 15 or so video feeds with non-Dolby E embedded audio,’ says Lelieveld. ‘For this huge production our usual  de/embedder cards in our mc266 weren't enough so we had an additional V__pro 8.

‘OB14's mc266 has a DALLIS frame full of Lawo de/embedders, however, with three (redundant) video feeds and many extra feeds going into the  Technical Operations Center (TOC), we needed more embedders. For this, the Lawo V__pro 8 was perfect – connected to the mixer via MADI, all video and audio delay needed to compensate for Dolby E decoding was handled in this box, with no need for separate video frame synchronisers.

‘Delaying the video and PCM audio in a video feed that has Dolby E requires just the click of a mouse instead of our usual use of an extra frame synchroniser. Every video channel has up to eight frames of delay, and we can embed up to 32 channels of audio per video channel, also at the click of a mouse.
It was Chelsea’s night on the field, but the winning formula for the sound went home with United.

About United
Dutch production company United is located in Hilversum / The Netherlands and operates nine state-of-the-art Outside Broadcast vehicles and mobile control rooms. Part of the huge Euro media Group that has production and post production facilities in Belgium, France, England, Germany, Italy and Switzerland, United provides vehicles to record major sporting events and live concerts all over Europe.

Lawo AG
Lawo, headquartered in Rastatt/Germany, specialises in developing, designing and manufacturing mixing consoles and matrix systems for radio and TV broadcasters, as well as for use in live events. Recently, Lawo offers also professional video equipment for the broadcast sector. Standards of high quality and innovative technology are supported by more than 40 years of experience in the field of professional broadcast technology.
Lawo’s product range covers digital audio mixing consoles for use in radio, broadcast, production and live applications, including the required software. In addition to the provision of matrix systems and audio networks, Lawo also offers video processing equipment. The company also carries out project engineering tasks as well as user training and maintenance. This high level of expertise results in a comprehensive support service for Lawo customers.