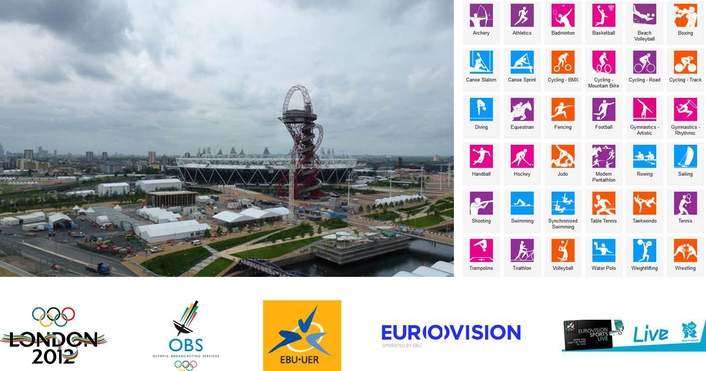 These were also the most multiplatform Games yet, with the European Broadcasting Union's (EBU) Common Broadband Platform (CBP) www.eurovisionsports.tv posting record numbers of users.

While time zones are an important factor, credit goes to the seamless event production and coverage provided by EBU Members and other broadcasters, who agreed on a roster to share the workload.

As always, the overall coordination and management of production was the role of Olympic Broadcasting Services (OBS), which also assumes much of the production. But covering an event of this scale would be impossible without the support of public service broadcasters.

The breakdown for London 2012 was as follows:

The BBC's daily peak audience for the London 2012 Games surpassed the best day of its Beijing 2008 coverage. The BBC's top figure was 20 million for the men's 100 metres final; in Beijing the highest was 7.5 million.

In France, 34 million people watched at least an hour of the Games on France Télévisions' France 2, France 3, France 4 and France O. During the Opening Ceremony, France 2 took a 27.5 percent market share, its best for seven years, while the next day France 3 won a 19.7 percent share, its highest since 2008.

Common Broadband Platform
Use of the EBU's live streaming platform, www.eurovisionsports.tv, which provided 47 live feeds from 42 EBU Members every day of the Games, more than doubled since Beijing. The site provided 34 million streams over a total 6.7 million hours of playtime.

EBU Director General Ingrid Deltenre said: "London 2012 has been a triumph for European public service broadcasters. The International Olympic Committee's primary broadcasting objective was to ensure as many viewers as possible were able to experience the Games, and the EBU is honoured to have been a part of meeting that objective."