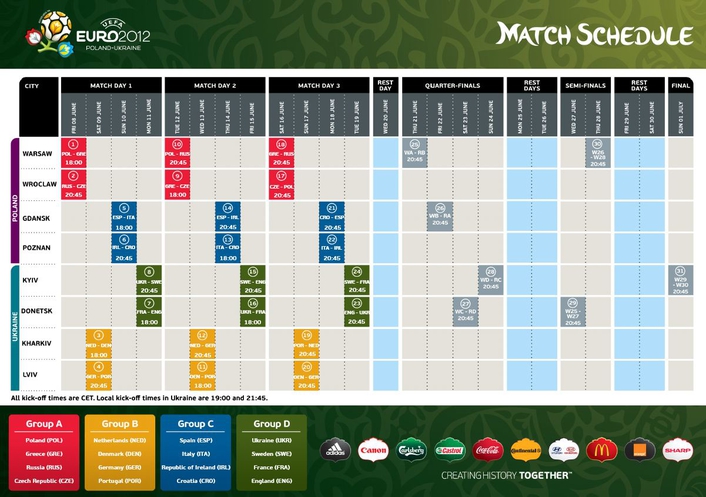 Group B 'the toughest', opponents agree
The 16 UEFA EURO 2012 contenders were placed into four hugely challenging groups by Friday's draw which pitted Poland against Greece in the opening game of the tournament. Holders Spain will face Italy, Republic of Ireland and Croatia in Group C of UEFA EURO 2012 after Friday's final tournament draw at the Palace of Arts in Kyiv, Ukraine.

The draw also threw up a tournament-opening game for Poland against the UEFA EURO 2004 winners Greece at the National Stadium Warsaw on 8 June. Poland, pre-designated the seeded team in Group A, also have the prospect of central and eastern European derbies with the Czech Republic and Russia respectively.

For the other co-host nation, who were seeded first in Group D, there are equally enticing challenges in store in six months' time: Ukraine will take on the might of Sweden, France and England. There also promises to be no quarter given in Group B where three former European champions – the Netherlands, Denmark and Germany – will come up against Portugal, the runners-up in 2004, in what is the toughest-looking section

Poland will launch the tournament on Friday 8 June at 18.00CET against Greece in Warsaw followed by the other Group A opener between Russia and the Czech Republic at 20.45CET.  The next day the Netherlands face Denmark in Kharkiv and Germany take on Portugal in Lviv to begin Group B, and on 10 June Group C starts as holders Spain play Italy and the Republic of Ireland are matched with Croatia.

Ukraine are involved in the last of the opening set of fixtures, meeting Sweden in Group D in Kyiv after England tackle France in Donetsk. The group stage runs until 19 June, then, after a rest day, the quarter-finals take place over four consecutive nights. The semi-finals are on 29 June in Donetsk and the following evening in Warsaw, before Kyiv stages the 1 July decider.

Group B 'the toughest'
"It's the toughest group, everyone agrees on that," Netherlands coach Bert van Maarwijk told UEFA.com and his colleagues from Denmark, Germany and Portugal concurred about Group B.

Former champions the Netherlands, Denmark and Germany have come together with 2004 runners-up Portugal in UEFA EURO 2012 Group B and unsurprisingly all four coaches agree that it is probably the toughest of the four sections. 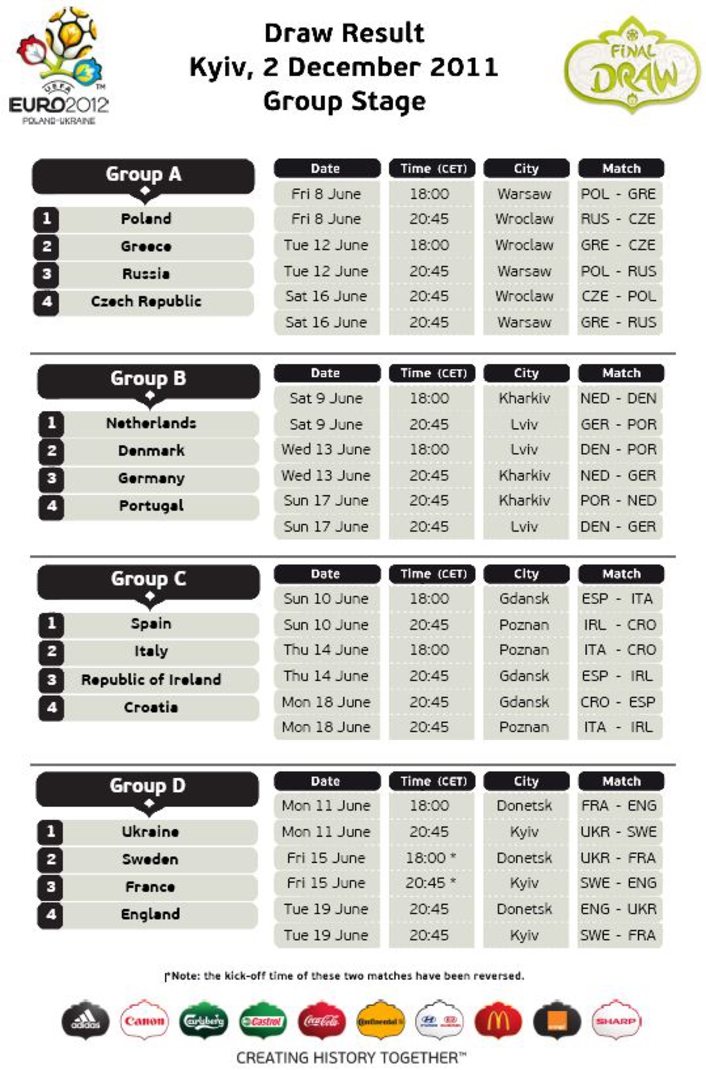