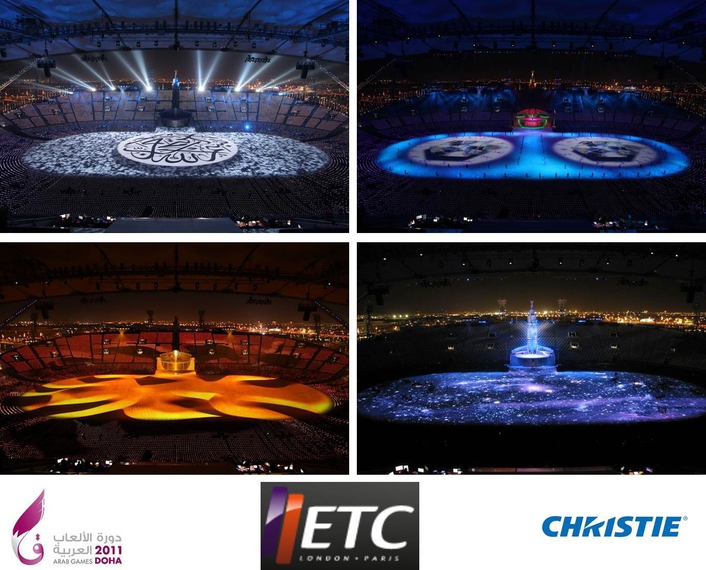 The opening ceremony of the 12th Pan Arab Games provided the ideal opportunity for technological innovation
On December 9th 2011 dancers, musicians, athletes, and falconers both on foot and on horseback paraded through the Khalifa Stadium in Doha (Qatar), which had been transformed into a huge screen for the opening ceremony of the 12th Arab Games.

Conceived by the British event production agency David Atkins Enterprises on a commission for the Organising Committee of the Pan Arab Games, the opening ceremony entitled Journey to Light relied on the expertise of its French technical services provider ETC and the Christie Roadster series of projectors purpose-designed for event production.

Christie’s partner ETC is an experienced event manager thoroughly familiar with the creative challenges David Atkins Enterprises can pose: its project manager Patrice Bouqueniau describes the opening ceremony of the 12th Pan Arab Games as “a totally original installation, even more ambitious than the one we did in Vancouver in 2010… This time, too, we chose Christie projectors – partly for their unequalled illuminating power, but also for their outstanding blacks and their unrivalled dependability.”

“The ground was covered in white geotextile, making a giant screen 136m long by 72m wide”, said Patrice Bouqueniau. It was a real 5280 x 3264 pixel challenge to cope with the constraints imposed by the grandiose set design; but that wasn’t all. The configuration of Christie projectors deployed by the ETC technicians needed as many as twelve matrix overlays in some parts of the image, all modulated using Christie’s Twist™ technology.

For the matrices, ETC chose to use 4:3 and 16:9 projectors using Christie Roadster S+20Ks for the one and HD18Ks for the other. “Set design constraints are absolute: we chose to use these two types of matrix because we couldn’t get the same pitch angle from both towers to cover the whole of the projection surface”, he said.

To ensure a faultless spectacle when it came to the ceremony, ETC went for media diffusion using what is known as a “redundant distributed” installation in which a “master” player broadcasts its control signals by optic fibre to the individual “slave” players associated with each projector. In this way each slave player stores the entire media and selects that part of the image addressed to its projector, forwarding the data stream to the projector by DVI. A parallel back-up network is updated live: if needed, each back-up player transmits the data stream via the second DVI input on each Christie Roadster. “A system like that is just so capable, you can think up any back-up configuration you want”, Patrice Bouqueniau emphasised.

The opening ceremony of the 12th Pan Arab Games, like all spectacular events in the past and no doubt in the future, provided the ideal opportunity for technological innovation and creative digital artistry. This one was projected onto the biggest surface ever, within the circuit of a stadium. Watched by no fewer than 40,000 enthralled spectators, Christie’s projection solutions showed off their power and dependability once again in the very the heart of the action, amply justifying the repeated confidence of its partner providers.

Journey to Light, a magnificent spectacle combining performance of many art forms, was above all a message of peace and freedom conveyed by the values of sport and the celebration of Arab culture. In an allegory of the coming together of peoples from all over the Middle East, the set design celebrated the desert as the land of prophecy, where disparate tribes learned to live together in perfect harmony through the shining light of knowledge.

“In close collaboration with the Arab Games Organising Committee, DAE created a story inspired and informed by the stories and images of pre-Islamic and Islamic history,” said David Atkins, CEO, David Atkins Enterprises. “The Ceremony was created to acknowledge the importance of these times, at a time when the very pages of Arabic history are being re-written.”