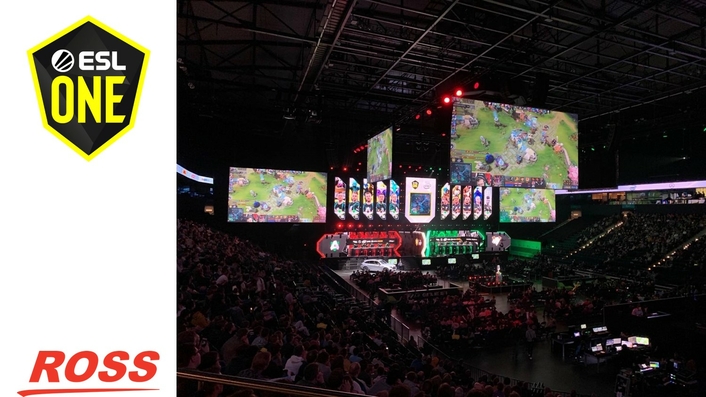 For the third year in a row the Barclaycard Arena in Hamburg, Germany, played host to the recent ESL One esports event that saw the world’s top Dota 2 teams come together for a full weekend of battle and an impressive prize pool of US$ 300,000. Once again, Ross Video’s XPression graphics suite and DashBoard control system were chosen by the organizers to drive the live feed and in-stadium production, with stunning results.

“We’ve used XPression for a number of years now, and we’ve consistently found it to be a very powerful and flexible tool”, notes Roman Erber, Head of Broadcast CG at ESL. “At this event, we used three channels of XPression; one channel for all of the show’s editorial content, a second channel for sponsor logos and other content we needed to rotate in-game, and a third channel for the animated breakscreens that were aired during ad segments”. ESL have now chosen an XPression + Datalinq solution for several of their events, and this reflects the fact that esports generates enormous amounts of data that needs to be presented to audiences. 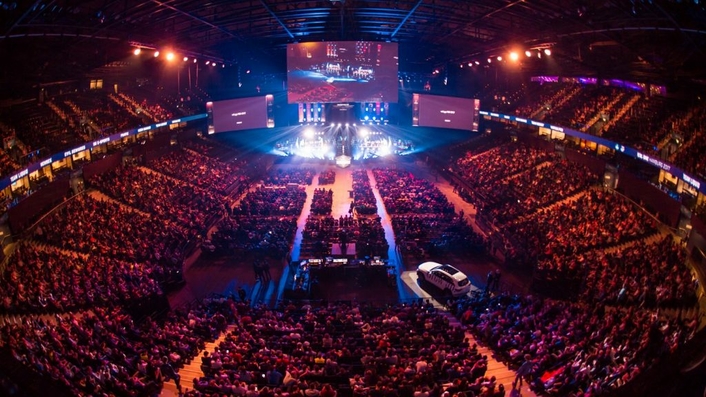 According to Erber, this data is crucially important. “Every esports tournament we manage is different in terms of the games and the way that passages of play unfold. Many games are very fast-moving, with multiple decisions being made and tactics changing by the second. On top of that, every game has a different way of outputting data; XPression + Datalinq enables us to capture, interpret and present game data in a very consistent and repeatable manner. What we do is obviously quite different from a traditional sports broadcast and we want to ensure that we present the games in a way that satisfies both the hardcore and more mainstream/casual fans”. The sheer amount of data generated around an esports tournament means that some degree of automation of data gathering is needed. “We can be pulling information from multiple sources at any given time (e.g. pre-game betting odds) but there are times during the tournament when we want to overrule the automated pull and let our graphics operator decide what to display. Similarly, there can be hot phases of a game when it’s important to show key information (e.g. highest kill streaks, overall kill/death ratio, etc.) and that data has to be pulled automatically because the pace of the game makes it impossible to collect and gather all this data manually. Fortunately, XPression makes this process painless and efficient”.

DashBoard, Ross Video’s open-platform control system, was also an integral part of the Hamburg event. “DashBoard has allowed us to create custom control panels for our teams at various events, and this has really helped to simplify the control of our productions”, comments Erber. “Our CG editorial position in Hamburg used DashBoard extensively, enabling us to pull content from various social media platforms and feeds into our production. The ability to build custom control panels means that this operator doesn’t need to be a trained XPression operator – they’re working with a panel that has been made just for them and does exactly what they need”. The XPression operators in Hamburg also found DashBoard highly valuable. “Esports broadcasts are becoming increasingly complex and we have important sponsor obligations to fulfil. We have a tracking and time system that is triggered by DashBoard, ensuring that our sponsors get the visibility (time on-screen and in the right segment) that we’ve agreed. With one hot button in DashBoard we can meet all our sponsor commitments – everything is pre-programmed on the back end – and this helps make our productions much less stressful and more efficient to manage. We couldn’t do it without Ross!”