Sound reinforcement at the central Medal Plaza was provided by XLVC line arrays driven by CPS and TG7 amps from Electro-Voice
From February 7-20, the resort of Garmisch-Partenkirchen in Bavaria was overrun by some 100,000-plus fans attending the 2011 edition of the FIS (or Fédération Internationale de Ski) World Championships. In addition to spectacular races, visitors were treated to a varied programme of entertainment that more than justified the organizers' claim that – far more than simply a sporting event – Garmisch-Partenkirchen was offering visitors a “festival in the snow”. Medal Plaza, for instance, in Michael Ende Park, was the scene each evening not only for the presentation ceremonies but also for shows featuring top German and Austrian acts like Ich + Ich, Culcha Candela, Christina Stürmer and DJ Ötzi, each drawing audiences of up to 4,000 fans at a time.

As was the case at last year's finals of the skiing World Cup, not only the races but also the organisation and logistics of the event were subjected to the closest possible scrutiny, the reason being that Garmisch-Partenkirchen is currently bidding together with Munich to host the Winter Olympics in 2018. Not only the athletes, therefore, but the entire organizational committee and all service providers were anxious to be seen in the best possible light. Prominent among the latter, naturally, was the team from TC Showtechnik of Weilheim, which was responsible for the lighting and sound reinforcement in a number of key event locations including Medal Plaza. 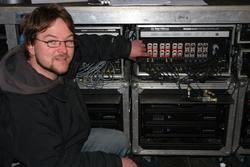 The centrepiece of the sound reinforcement design was the XLVC line array from Electro-Voice. "We used EV's LAPS line-array simulation software to ascertain the ideal set-up for the event," reports Martin Schulze, who manages the Bavarian rental company jointly with Stefan Rehtaler. "Even habitually critical FOH engineers working here with their bands expressed their extreme satisfaction with the system."

The main array in Medal Plaza consisted of twelve EV XLD281 cabinets per side complemented by flown XCS312 cardioid bass elements to enhance the lower midrange. To boost the very bottom end, twelve EV Xsubs were positioned beneath the stage. To provide homogeneous coverage for all 4,000 listeners, eight Electro-Voice XLE loudspeakers plied those at the very front of the audience as well as to the left and right of the stage with near-, in- and out-fill, as appropriate. The XLD hangs were driven by 16-channel amp racks made up of two Electro-Voice CPS 4.10 amps and one CPS 8.5 amp each.

"This allowed us to drive in each case three stacks actively in three-way mode, thereby achieving considerably greater acoustic differentiation," explains Schulze. The subwoofers were driven by EV TG 7 power amplifiers, whilst foldback to the performers on stage was provided by side-fills comprising Electro-Voice's tried-and-tested MT2 bass elements combined with PX1122 tops and PX1152 wedges, with the entire monitoring system powered by CP3000S amps. Meanwhile two Electro-Voice NetMax N8000-1500 digital matrix controllers employing FIR-Drive technology made it possible for engineers – via Electro-Voice's IRIS-Net – to intervene promptly wherever necessary to adjust the output or frequency response of the system. But it is not simply the sound processing but also the routing possibilities afforded by the N8000-1500 controller that Schulze cherishes. "I know of no device with which you can work more creatively," he says. "With it, you can really construct the perfect matrix."

Not only the technicians, of course, but the material itself at the World Skiing Championships was subjected to severe stress; but despite the most adverse weather conditions, with temperature variations in excess of 20 degrees Celsius, not one single component failed throughout the entire fortnight. "Once again, systems from Electro-Voice have proved that they are entirely impervious to cold, rain, snow and even ice," concludes Schulze.

Two years ago, the team from TC Showtechnik installed a sound reinforcement system along the newly designed, three-kilometre Kandahar downhill. The solution here involved mounting some thirty-four CD850 loudspeakers from Electro-Voice on iron masts up to 14 metres high lining the run. "For my money, these are not only the most robust 100-V loudspeakers on the market," says Schulze, "but also systems offering outstanding sound quality and intelligibility." On the Kandahar run, the loudspeakers are driven by six channels of power emanating from Electro-Voice CPS 4.5 amplifiers.