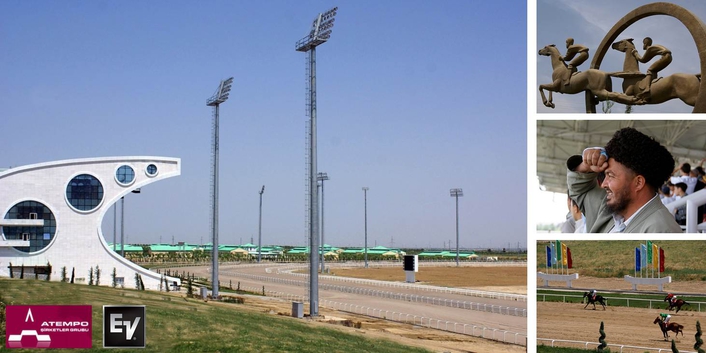 Ahal Province now boasts the largest equestrian center in all Turkmenistan
For centuries, horses and equestrian sports have formed a major part of the Turkmen cultural and sporting tradition. To keep pace with the increasing demand from racegoers, organizers are constantly investing in new racecourses. Such was the case recently in Ahal, a province with a population of around a million, which since February 2011 has also boasted the largest racecourse in the country. With seats for 3,000 spectators, the track is the centerpiece of a huge sporting and cultural center that includes an amphitheatre and a conference hall.

The need to ply racing fans with an intelligible stream of information means that the quality of the sound reinforcement system is of paramount importance. The company responsible for the installation was Electro-Voice and DYNACORD partner Atempo Sound and Lighting, which had to beat off fierce competition for the commission from rival suppliers. Istanbul Regional Director Volkan Konuralp recalls what tipped the balance in Atempo’s favor: “The wealth of our experience handling projects of a similar magnitude as well as our comprehensive product portfolio convinced our customer.”

Electro-Voice and DYNACORD distributor Atempo installed over 130 loudspeakers in the new complex
The installation – complete with an evacuation system – covers a variety of zones such as the racetrack, the VIP area, and the training grounds, as well as both covered and uncovered grandstands, each of which has individual sound reinforcement requirements. Trackside, for example, the sound pressure levels must never be such as to frighten the horses. Nonetheless it needed to be loud enough to ensure spectators can follow the commentary at all times without straining to hear. Careful thought therefore had to be given to the type, position, number, and levels of the loudspeaker systems used.

To satisfy the complex and often conflicting demands of the commission, the Atempo team installed over 130 Electro-Voice loudspeakers. The systems chosen include XLC line array elements, ZXA1 powered speakers, and EVID ceiling-mounted loudspeakers, and provide a vivid illustration of the comprehensiveness of Electro-Voice's product portfolio.

In detail – from the grandstands and VIP area to the training grounds
Homogeneous coverage of the grandstands is provided by four line arrays. These are made up of 16 Electro-Voice XLC-127DVXs, eight XLC-215 subwoofers, 16 ZX-5/90 loudspeakers driven by 9 CPS4.10 and two CPS8.5 amplifiers. To extract the maximum performance and power from the system, the Atempo team opted for two Dx46 sound system processors with FIR filters.

In the VIP area, the sound has to be flawless, not least because the new course counts prominent figures among its regular guests. Here, eight powered Electro-Voice ZXA1 systems provide sound of the requisite quality. To cover the training and warm-up areas, the Atempo team installed eight waterproof Electro-Voice ZX5/90PI loudspeakers driven by two Q1212 amplifiers.

As is the case with all large event locations, the evacuation system is of enormous importance. After attending a variety of demos and tests, those responsible opted for a combination of Electro-Voice and DYNACORD systems, such a combination having already proved its value in numerous prestigious installations all over the world. Here the solution comprises 58 Electro-Voice EVID C4.2D ceiling loudspeakers combined with eleven EVID 4.2T surface mount speakers driven by DYNACORD amplifiers. The commentary and announcements are captured by a lavish collection of Electro-Voice microphones, including PolarChoice Desktop 18, RE-2-N2/D (wireless), and PL-24 models.

But whether it was the sound reinforcement or the voice evacuation system, the twin demands of reliability and intelligibility were paramount. "Given that the President of Turkmenistan is an avid racegoer and a frequent guest at the track, the owners' concern that the installed system be 'compromise-free' was understandable," explains Konuralp, and although it has not yet been commissioned, the first sound tests have made a profound impression. So much so, in fact, that Electro-Voice and DYNACORD will now start firm favorites when the time comes to satisfy the sound reinforcement needs of the remaining areas of the cultural and equestrian center.