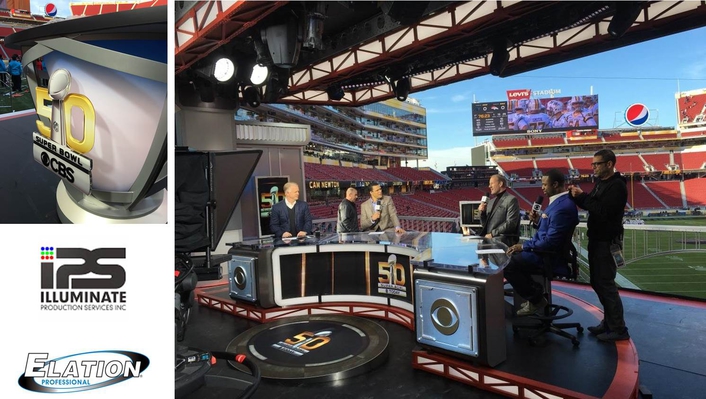 Illuminate Production Services (IPS) of Sacramento provided the Elation products for CBS’s exclusive Plaza, Field and Tailgate Super Bowl 50 sets, the main on-site broadcast settings for an event that proved to be the most-watched television program in U.S. television history.

The lighting package included Elation Platinum Spot 15R Pro™ color and gobo-changing moving heads used for backlighting of the commentators and also used to illuminate the Vince Lombardi Trophy, the trophy awarded each year to the winning team. Elation’s award-winning Platinum FLX™ hybrid moving head was used to light the Super Bowl 50/CBS logo both on the floor and on the front of the set, one in beam mode and one in spot mode. Used for backlighting color were Elation Design LED Strip RGBAW™ strip lights and SixBar 1000™ LED battens. Twelve ADJ Pinspot LED Quad™ fixtures were also used. The Elation fixtures competed with bright sunshine from a cloudless sky and were color corrected to match the time of day, eventually adjusting to a warmer color temperature once the stadium lights came on.

Elation’s products were also used on the playing field for the highly-anticipated Super Bowl 50 Halftime Show featuring Coldplay, Beyoncé, and Bruno Mars. Some 350 of Elation’s ultra-compact ELAR Q1 color-changing PAR lights were mounted in the main stage deck wings to uplight the set and performers during the 12-minute musical performance.

The main performance area, a 33'5" x 35'5" stage with four stage wings, was carried onto the field and constructed piecemeal in a matter of minutes. “I was lucky enough to have input on what was to be used on the stage for the halftime show,” commented Elation’s Jim Harrington. “Our dealer, All Access, who I have known for 20 years, trusted us to pick the products to be considered. We proposed the Elation ELAR Q1 because they are bright and we knew the halftime show would be taking place during the day time. I am happy to say it turned out very well, so well in fact that under camera we needed to back the brightness down a bit as the lights were reflecting on the performers’ cheeks.” 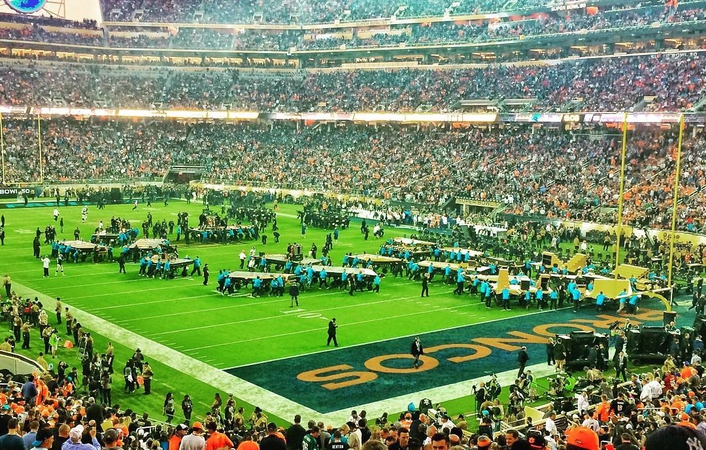 Each ELAR Q1 fixture houses a single 18W RGBW LED and can emit a wide palette of colors from a narrow 7-degree beam. Measuring less than 3.0” high and weighting only 1.1 lbs., the ELAR Q1’s small size and IP65 rating allow it to hide virtually anywhere, making it ideal for set elements like the Super Bowl 50 Halftime Show stage.

The Super Bowl 50 Halftime Show production design was by Bruce Rodgers of Tribe, Inc., with lighting design by Bob Barnhart. “Bruce Rodgers and his design team at Tribe did a fantastic job of programming the lights, getting all they could out of them and what an amazing job the All Access crew did, not only mounting the lights on the stage but all the band gear and other lights too,” Harrington said. “Wiring everything from underneath the stage allowed the whole stage, lights, video and band gear to be up and running in 7 minutes from entry into the stadium, everything in place, plugged in and ready to go. What a feat!”