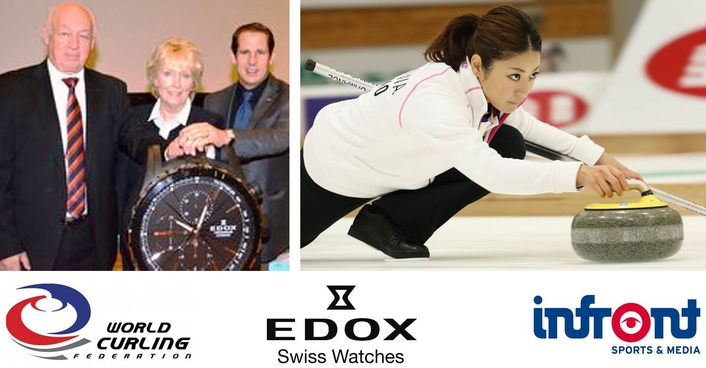 Infront secures contract with Swiss watch company for key exposure across flagship WCF events over the next two years
Edox is the new Official Timekeeper of the World Curling Federation, following the signing of a two year agreement with the Swiss watch manufacturer during the Edox and Claude Bernard 8th International Conference in Cannes, France

The contract, facilitated by the WCF’s marketing agent Infront Sports & Media, sees a new role created for an official timekeeper. This will see Edox become fully integrated across the WCF World Men’s and Women’s Curling Championship events as well as the European Curling Championships for the 2013/14 and 2014/15 seasons.

Edox was founded in 1884 in Biel, Switzerland. Today, the company counts half a century of experience in professional sports timekeeping in the fields of cycling, motor sports and sailing. As the Official Timekeeper of the WCF, Edox will benefit from prime exposure at WCF flagship events. Principle contractual rights include on-screen and under ice advertising, logo integration on scoreboards and event timing clocks as well as prizes for the winning teams.

Becoming an integral part of the curling
Kate Caithness, President of the WCF, commented: “Infront’s on-going effort to enhance the communication value and strength of our events continues to deliver strong marketing results. We welcome Edox onto the ice and are convinced that our new timekeeper will benefit greatly from the growing popularity of curling, especially as the company has committed to all three top events and will therefore be an integral part of our sport for the next two years.”

Victor Strambini, President of Edox, said: “There are few sports that are so closely associated to precision and accuracy as curling. This provides an ideal environment for our premium brand, even more so as the TV audiences are on the rise. The Edox motto is to provide ‘Timing for Champions’ and we are proud to activate this approach through the World and European curling champions of the future. A dedicated WCF watch made by Edox will allow fans of curling to make a true champion impression themselves.”

Bruno Marty, Infront’s Executive Director Winter Sports, said: “Together with the WCF, our target is to access new markets and regions with the sport of curling and spread its fascination around the world. Edox as the new timekeeper will strongly benefit from these efforts, accompanying the WCF premium events on their journey around the world and building on the sport’s popularity to reach new markets. The WCF will gain a partner that is willing to activate the sponsorship, even beyond the actual event.”

About Edox
Edox’s story began back in 1884 with the founding of its first atelier. Almost 130 years later, Edox’s timepieces are still inspired by tradition and know-how, but also innovative design and technical perfection. Aiming for top positioning within the top three of the Swiss watch brands of the segment, Edox‘s existence has been studded with success and horological inventions. Major success of the Swiss Jura based watch maker is probably the famous Les Bémonts Ultra Slim, a timepiece featuring the slimmest calendar quartz movement. This world record is still unbroken to this day.

About Infront Sports & Media
Infront Sports & Media, based in Zug, Switzerland, is one of the leading international sports marketing groups in the world. Known for its high standards of delivery, the company covers all aspects of a successful sport event – including distribution of media rights, sponsorship, media production and event operations. As a leading player in winter sport, football and summer sports, Infront enjoys long-lasting partnerships with 120 rights-holders and hundreds of sponsors and media companies. With an experienced and passionate team of 500 staff in 20 offices across 10 countries, the Group helps to annually deliver 3,300 event days of top class sport around the world.

The Broadcasting of the Vancouver Olympics
On the Way to Sochi: Pre-...s covered by ANO Panorama