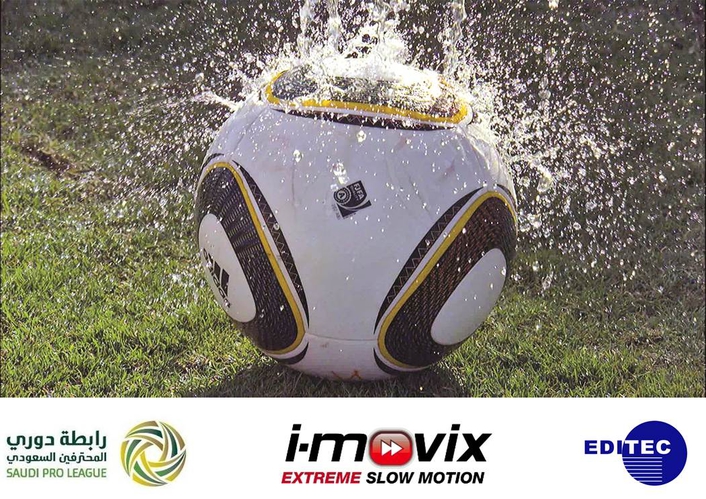 .
UK Ultra SloMo specialist Editec announced today that it has won a contract to supply I-Movix Ultra SloMo equipment, along with technical backup, for the new season of Saudi Premier League coverage.

The contract follows a successful year of operations with Editec’s now industry standard I-Movix Sprintcam Vvs high speed camera system with leading Saudi-Arabian Sports Production company Sport Expert, based in Riyadh. The new contract is for coverage of the next season of this most prestigious series. This year it has been decided to increase the rental contract up to three camera systems later in the season.

Prior to the last season, Sport Expert had been asked to bring coverage of the Kingdom’s soccer season up to world-class standards, and an I-Movix ultra slow motion system from Editec was one of the new technologies they installed.

Not only has the use of this impressive technology been a hit with the producers but also the Saudi Royal Family. To demonstrate the kind of outstanding shots possible with the I-MOVIX system, Sport Expert created a close-up shot of a football lit from behind by bright sunlight, and shot at 2500 frames per second as water was poured over it. As they scattered on impact with the ball, the sunlit droplets looked like sparkling diamonds, and this shot was then used in the opening sequence for the first game. It was so successful that the mobile unit received a direct call from a member of the Saudi royal family requesting the shot to be repeated during the game.

The impact of the new coverage was both immediate and immense. Audiences for a single game were as high as 25 million, and media response was very enthusiastic.

Steve Cotterill MD Editec UK - UK & Ireland sole distributor for I-Movix said "We are very pleased that Sport Expert have chosen to use our technology once again. Despite the harsh conditions in Saudi Arabia, the Sprintcam performed without fault. The camera was supplied with a special high temperature cooling upgrade and I am sure that this has helped the situation as temperatures have soared to around 48 deg at times."

Sport Expert covered around 450 games during the season from Riyadh, Jedda and other major cities, with as many as six games being televised concurrently. The company equipped six OB units with the latest equipment and used the Editec I-MOVIX SprintCam Vvs HD system for the most important games. Based on the Phantom camera from Vision Research, the SprintCam Vvs HD offers up to 5,600 fps in 720p or up to 2,600 fps in 1080i. The system provides instant replay at native HD resolution and image quality with a dual output for a live and replay feed. Other features that make it convenient in an outside broadcast environment include an integrated viewfinder, tally and intercom, all running down a single SMPTE fiber to a CCU in the truck. These developments increase reliability and picture quality, and reduce the need for setup and training.

The replay remote and the OCP (control panel) make the SprintCam Vvs HD very flexible and simple to operate. Anyone with a good working experience in live broadcast will find it familiar, and operational knowledge is enough to understand the system’s workflow.

To achieve the best possible communication, Sport Expert took full advantage of the system’s built in talkback facilities: ‘We have the audio system wired so that the cameraman can talk direct to the VT operator recording the output from the camera. I can also watch what he’s doing so I can tell him if he’s missed a good shot, or tell him to cue the shot to miss an out-of-focus section.’

About EDITEC and I-Movix
EDITEC has supplied I-Movix SprintCam systems to broadcasters in the U.K. since the product line was launched, working with key players on Ultra Motion coverage of events in the U.K. and worldwide  including darts,  Formula 1 racing, Hickstead show jumping, boxing, Premier League football, the Heineken Cup, international rugby, Cartier Polo finals, and Saudi Premiere League football.
The I-Movix range of products are designed specifically for extreme slow motion and have been received with great acclaim by both sports and commercial customers worlwide. With superfast installation and user-friendly custom-designed control panels, the camera runs off a standard SMPTE fibre and takes broadcast B4 mount lenses. For film use, an adapter enables any PL mount lens to be used.