DTM
In 2009, DTM, The German Touring Car Masters, solidified its standing as one of the most popular international Stock Car Series. More than half a billion people, 60% of whom are European, viewed over 2.500 hours of DTM competition, on 500+ television networks airing live race action and shoulder programming. 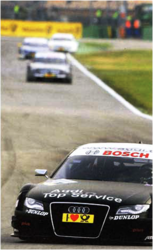 In Germany the public television Network ARD delivered the top market share in 5 out of 10 DTM live broadcasts during prime time Sunday afternoon telecasts. Notably DTM's partners, as well as manufacturers Audi and Mercedes-Benz, profited from the robust live audiences, as well as strength of the secondary broadcasts. A number of Series' sponsorship assets including track signage, paddock entrance & exits and exclusive branding on the front/rear windshilds generated exceptionally high brand exposure. At a CPM of less than €1 (=$1,45), DTM delivers a strong ROI in comparison to other major sports properties in Germany. Globaly, DTM generated an equivalent of almost €60 million (=$87 million) in pure advertising value for the manufacturers Audi and Mercedes-Benz. Several other related brands including Audi Bank achieved substantial brand recognition through their targeted on-car branding and paint schemes. Extensive print and online DTM reportage contribution to the growing media impactof the sport.

ITR will create an even stronger 2010 DTM season 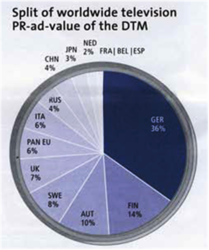 On-site activation was an integral element of many DTM sponsors' strategies in 2009. Audi, Mercedes-Benz and other Series sponsors created lasting brand experiences throughout the DTM season. The DTM Series is exceptionally strong in this area, with a clear and focused strategy at the grass root level. Beginning with the team presentations in Düsseldorf, through toi the last race in Hockenheim, audiences ranging from 160.000 to over 200.000 (per event) participated in outreach campaigns that put fans in touch with top engineering and racing stars. These factors reinforced DTM's position as a premium communications platform for manufacturers, teams and sponsors. ITR is building on the Series 2009 success to create an even stronger 2010 DTM season.