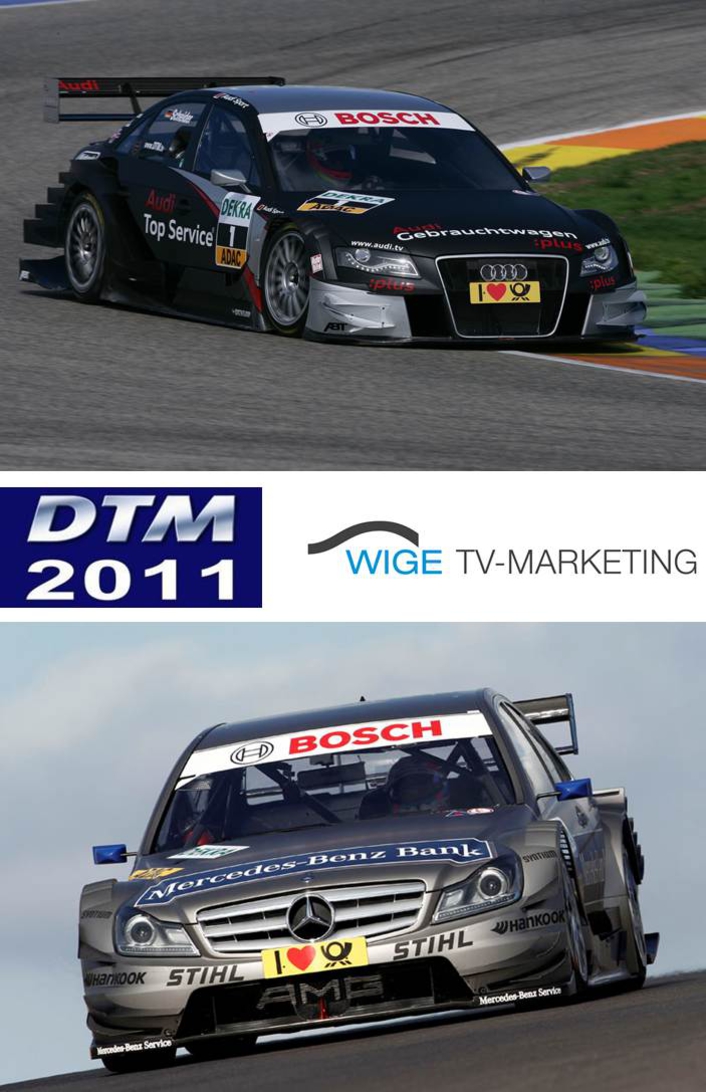 DTM 2011 in HD for the first time: New live broadcast slots in Italy, Spain, the Netherlands and Scandinavia
The 2011 DTM season began on the first weekend of May – and once again, the world witnessed it live. For the first time, TV viewers around the globe watched the world’s most popular international touring car series in HD. The DTM, now featuring crisply-detailed close-up action and glorious, rich colours, has become a true high-definition TV experience – an innovation which has had a tremendous impact, especially in European broadcast coverage.

For many years now, the DTM has been broadcast live throughout the season in almost every country. This year, the coverage incorporates new, even more attractive European broadcast slots, underlining the huge cross-border interest in the series. WIGE Int’l TV-Marketing GmbH, the series’ TV rights management and distribution partner, has successfully acquired leading live broadcasters in Italy (Sky Italia), Spain (TV3 Catalunya), the Netherlands (RTL7) and Scandinavia (Viasat Motor), adding another qualitative boost to the DTM’s European TV presence.

WIGE TV-Marketing Managing Director Thorsten Schroeder commented: “For more than ten years, we have worked together with ITR in a partnership based on mutual trust. The DTM forms the core of our motor sport portfolio, so we identify 100 per cent with it. This mindset is fully reflected in our marketing efforts, which means we always strive for optimal media value, way beyond simple distribution and commercial exploitation of the series. The DTM is a premium product, and awareness of that is the top priority in our communications with TV partners.“ Overall, live coverage has been significantly extended, partly due to new slots in Asia, with an increase in the number of countries from 104 to more than 115. In Japan, the series will be broadcast live this year by J-Sports.

The comprehensive summaries provided by the DTM Highlights enjoy a fixed place on the schedule for many TV stations spread over every continent. 2010 witnessed an enormous expansion in the global highlight coverage, from 84 to 107 countries (increase from 891 to 2107 broadcast hours). This year, 143 TV stations in 129 countries will report on the series via detailed summaries during the week after each race. Among the many newly-won stations are Marca TV in Spain; ESPN is extending coverage to the Caribbean region this year. Our partner Servus TV will also close previous gaps in Luxembourg, Switzerland and Liechtenstein.

Much-loved British motor racing commentator Andrew Marriott will continue to cover the races live in English from the circuits. Marriott, whose distinctive voice can also be heard providing motor racing commentary on Sky Sports and Speed Channel, is a DTM expert who has supplied the voice-over for the International Highlight since 2001. His detailed, enthusiastic and rousing commentary will again ensure that broadcasts in Great Britain, Asia and the USA are thrilling and exciting live experiences.

Footprint in more than 175 countries

Fans who are unable to follow all the races live in the course of the season naturally need not miss out on bang up-to-date news from the DTM world. Just 90 minutes after the end of each race, the DTM News package is available around the world via news agencies SNTV, Omnisport and the EBU. With the track temperature only just starting to cool and fans beginning to wind down from a thrilling weekend, the best of the action and post-race reaction can be accessed by news desks in 175 countries, offering potential reach of up to half a billion viewers.