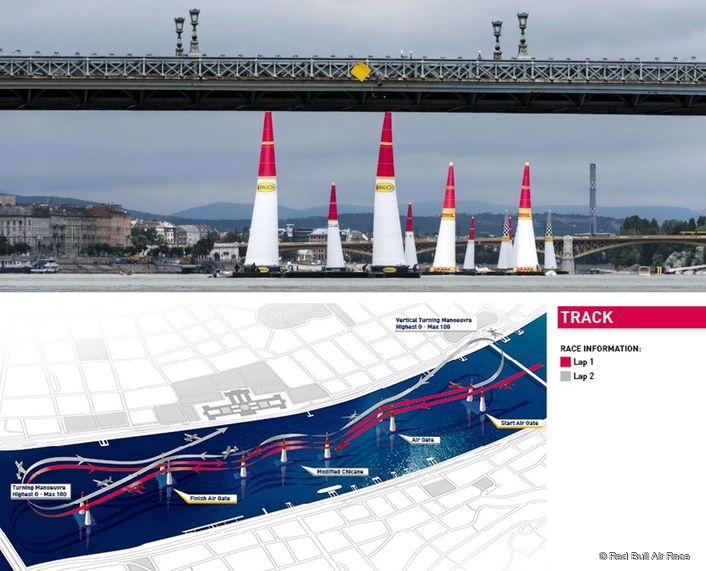 An abbreviated Red Bull Air Race in Budapest, Hungary on Sunday wasn’t short on thrills, as Germany’s Matthias Dolderer confidently delivered the best time in the Round of 8 despite race winds that pilots said were the most turbulent they could remember. Due to weather delays, the safe flight window could not accommodate the full racing program, and when the final Round of 4 was cancelled, race results were determined by the Round of 8 times. Dolderer’s 58.653 seconds clinched his victory, while Austria’s Hannes Arch was second with 58.942 and Australia’s Matt Hall took third with 59.236. 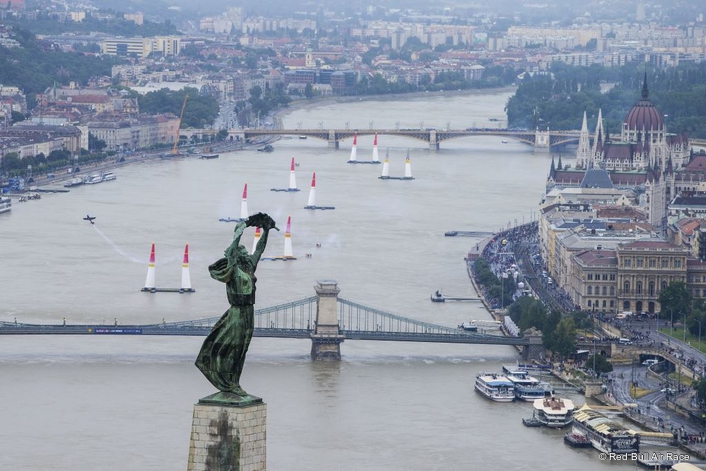 The rain couldn’t drown out the cheers of the 20,000 spectators as they lined both banks of the Danube and waved from picturesque balconies to celebrate history’s landmark 70th Red Bull Air Race. Even worse conditions had canceled Qualifying on Saturday, and limited experience on the season’s most technical track so far gave the advantage to the more experienced pilots. 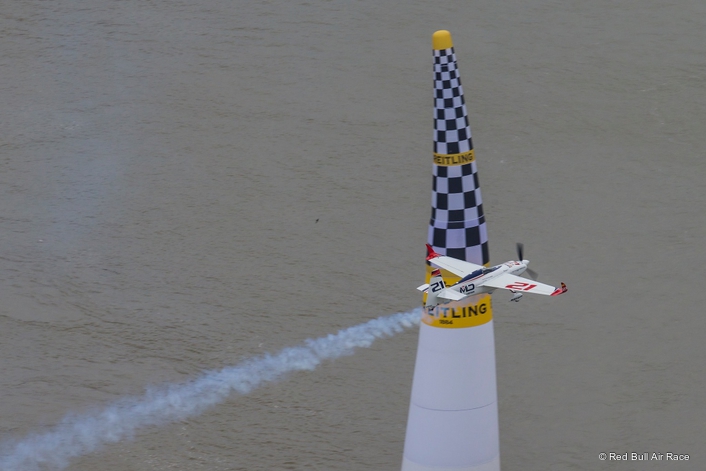 In accordance with the rules, a finish based on Round of 8 results awards 75% of the points given in a full race. In earning his second win of the season (and the second of his career, which began in 2009), Dolderer increased his tally in the World Championship points to 41.25, putting him 15.25 points ahead of Arch in second. Nonetheless, after earning no points in the season opener due to a penalty, Arch’s 26 points represent a significant rebound as the season reaches its midpoint. American Kirby Chambliss, who rounded out the Budapest Final 4, now sits just behind in the third position with 25.25 points. 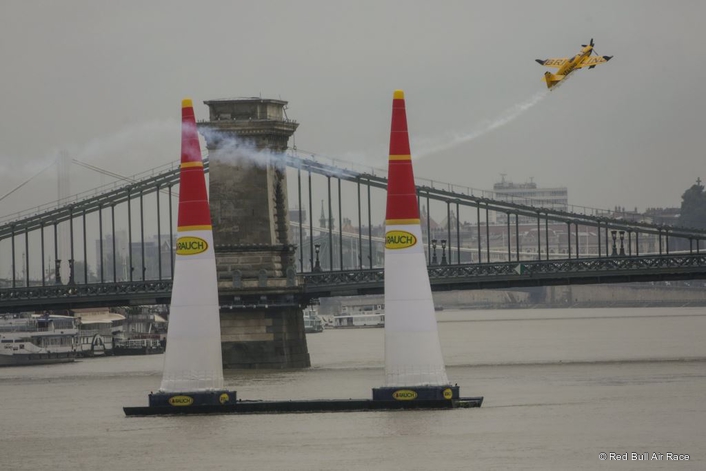 “It was crazy with the rain and wind. After a penalty in my first flight today I thought it was just a bad weekend, but then the second flight went really well,” said Dolderer, who thanked his Matthias Dolderer Racing team for their support on a difficult weekend. “I’m not focusing on the points standings. For me what counts is race by race, and our results are showing that all the hard work over the winter on the aircraft and myself paid off. We really look forward to the next race and will treat it as if we’re starting at zero.” 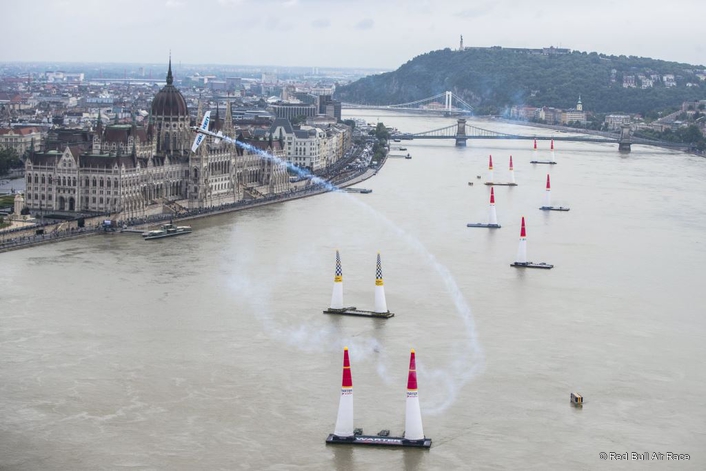 Dolderer also earned the DHL Fastest Lap Award, a component introduced this season that defines a new standard of speed at the Red Bull Air Race. Each race this season has seen a different awardee, with Dolderer, Arch, Hall and Martin Šonka of the Czech Republic each earning the honor. 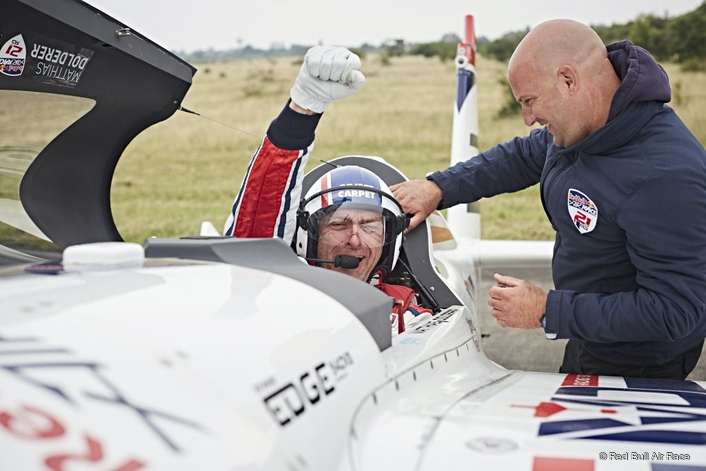 Due to the weather conditions, the weekend’s Challenger Cup competition was cancelled. The Challenger Cup is an element of the Red Bull Air Race created in 2014 to help the next generation of pilots develop the skills and experience needed for potential advancement to the Master Class. 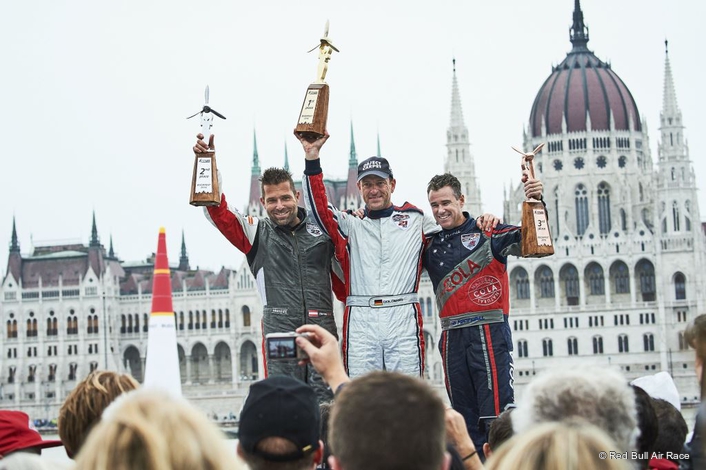 Red Bull Air Race 2016 calendar announced with new locations in Germany and U.S.
Muroya claims historic first win for Japan and all of Asia
Verstappen's F1 showrun at the Hahnenkamm