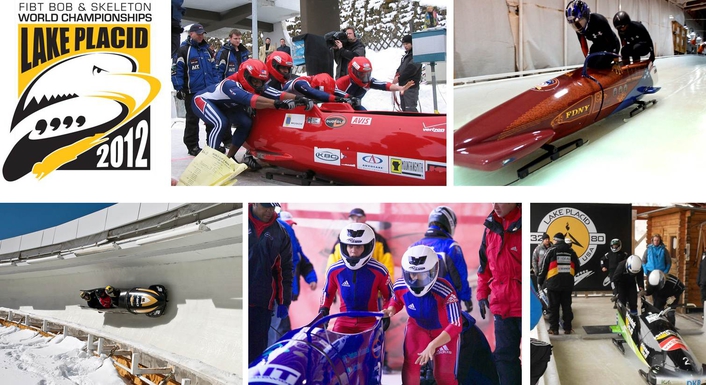 The Bauhaus FIBT Bob & Skeleton World Championships take center stage in the winter-sports world from Lake Placid, NY, for the next two weeks when, for the 10th time, the famed U.S. Olympic location hosts the championships for some of the world’s fastest (and craziest) winter-sports athletes writes Ken Kerschbaumer for SVG.

“There are only seven winter-sport federations in the IOC, and we own our own property and produce our own TV feed,” says John Morgan, network coordinator for the Federation Internationale de Bobsleigh and Tobogganing’s FIBT TV.


FIBT TV handles the core production of six events in Europe as well as the World Cup and World Championships.

“In Europe, we have the same TV truck and crew, but here we use a Corplex TV truck, and in Whistler, [BC,] we use a CBC truck,” he explains. “But we have 24 crew members who probably have about 400 years’ experience between them.”

More than 20 broadcast networks rely on FIBT’s coverage, including RTR Russia, SRG Switzerland, Eurosport in the UK, ARD/ZDF in Germany, and TV4 in Sweden, Denmark, and Norway. ARD/ZDF next week will also send a crew to Lake Placid and even set up a broadcast stage.

“This is a traveling circus that represents the sport and also now is staging the awards ceremony,” says Morgan.

The production will be handled out of Corplex Iridium and involves 28 cameras, graphics, and about 35 microphones. “Every track is different and requires a different game plan,” he says of producing sled events.

Morgan, a former bobsledder who has been a commentator on the past eight Winter Olympics, says that it was around 1990 that he started helping influence camera positions for the sport. 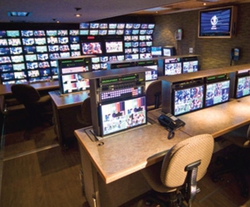 “Not only is every track different,” he adds, “but it changes depending on the time of day or how much light is on the track.” That changes which part of the course is fastest, requiring the cameras to be adjusted to make sure they capture the action properly. Corplex VP of Sales Joe Scionti is on hand with Iridium’s truck.

“Right now, we have everything locked down pretty well, although weather is always a big factor,” he says. “But we have everything tied together.” A challenge in a sport that moves so quickly is making sure the audio properly follows the action. The track is a little longer than a mile, and 28 cameras cover it. Each is outfitted with a microphone, and it is up to audio mixer Steve Miller to ensure that the sound of the sled matches the image.

“Miller deserves a great deal of the credit because he doesn’t do automation; he just follows it like he is playing piano,” says Gordon Reed, technical manager on the show. “The art that he puts into it just blows me away, and it even sounds pretty good with stereo sync on the mono mics.”

Reed says shotguns are the microphone of choice, and a few stereo mics are in place at the start and finish and in some of the big sweeping turns. A mix of Audio-Technica and Sennheiser mics are used, including 416 and 418 stereo mics and the 816 model.“ One of the surprising things is how the sound travels across the track like the way it travels across water,” he explains. “So you can place a lavalier mic at the top of the turn and pick up sound for an audio bed for the come-and-go shot.”

The World Championships continue through Feb. 27, providing plenty of thrills and excitement for bobsled and skeleton fans the world over. One thing to look for beginning next year (and at the Winter Games in 2014) is the use of gadgets on the sleds, such as cameras and telemetry gear. Morgan says there are issues related to the weight of the sleds because there is a maximum allowable weight. “We will test it next year and hopefully put it on the sleds in time for the 2014 Olympics in Sochi, Russia.”