“Spanning more than 30 years, the partnership between the DFB and Infront is one of the longest in German sport."
The German Football Association (DFB) has extended its long-term marketing partnership with Infront Sports & Media by four years through to 2018. The international sports marketing company exclusively handles the commercialisation of board advertising at all qualifiers and friendly matches of the German men's national team both on domestic soil and abroad. In addition, the contract includes all advertising rights for the home games of the DFB women's national teams as well as the Junior U21, U20 and U19 teams.

New marketing concept for national team matches: Less is more
In collaboration with the DFB Infront has developed an optimised concept for the new marketing period, which further increases exclusivity for the involved brands. As a reference to the number of players on the field, the amount of available partner packages for the adjacent boards has now also been reduced to eleven. As the DFB is the only European Football Association that holds both the advertising rights for home and away games for its men's national team, companies are provided with a continuous presence at approximately ten matches a year. 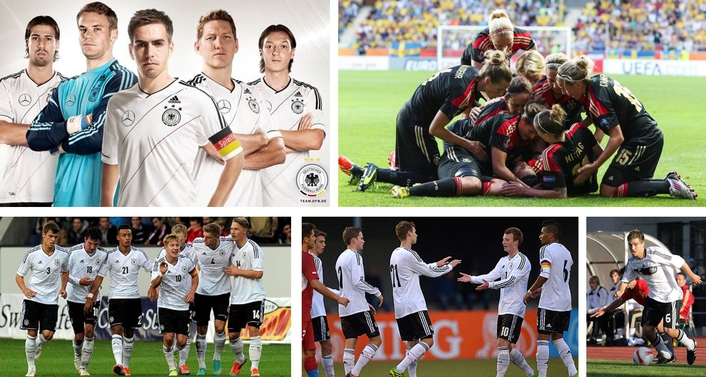 The contract includes all advertising rights of the DFB men's and women's national teams as well as the Junior U21, U20 and U19

Infront exclusively handles board advertising at all home and newly also all away games of the German national team
Infront will ensure an optimal and effective display of advertising messages with state-of-the-art LED systems used at every DFB national team game. As friendly matches are broadcast on ARD/ZDF and qualifiers on RTL, the advertising partners of the German national team reach a wide and varied target audience with their messages. In addition, the DFB and Infront have developed further ways of extending the brand communications through digital channels. In the future, the board presence during a live game is the starting point for interactive multimedia activation – as part of the integrated marketing program for the partners.

One of the longest partnerships in German sport
Wolfgang Niersbach, DFB president, said: “Spanning more than 30 years, the partnership between the DFB and Infront is one of the longest in German sport. This cooperation has always been marked by trust and innovation. We therefore step very optimistically into the next four years and together with Infront have a common goal of effectively integrating our partners in the highly attractive advertising environment of the national team games.”

Philippe Blatter, President & CEO of Infront, added: “As a long-term partner, we share the DFB vision for German football and its sponsors for which we offer a consistent and coordinated presence on all available platforms. Similar to the DFB Cup, together with the association we will gently but continuously and professionally evolve the premium character of the DFB national games. High exclusivity and digitally integrated marketing programs will be in the foreground. We thank the German Football Association for their continued confidence in our company.”

About Infront Sports & Media
Infront Sports & Media, based in Zug, Switzerland, is one of the leading international sports marketing groups in the world. Known for its high standards of delivery, the company covers all aspects of a successful sport event – including distribution of media rights, sponsorship, media production and event operations. As a leading player in winter sport, football and summer sports, Infront enjoys long-lasting partnerships with 120 rights-holders and hundreds of sponsors and media companies. With an experienced and passionate team of 500 staff in 20 offices across 10 countries, the Group helps to annually deliver 3,300 event days of top class sport around the world.