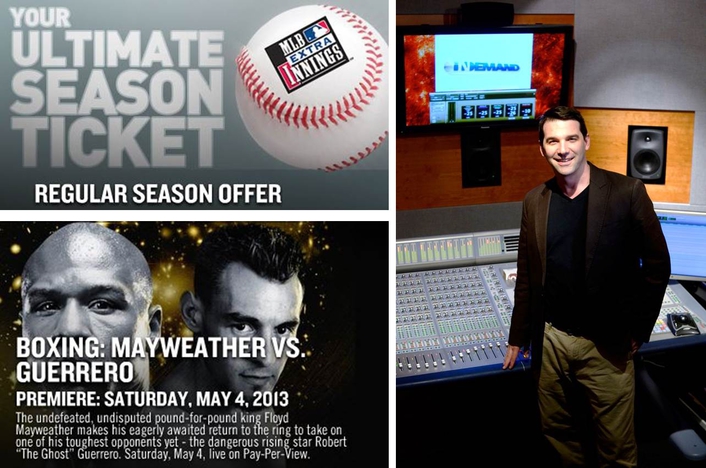 As the leading distributor of transactional movies, sports and events to video providers across North America, iN DEMAND delivers a huge amount of programming from more than 150 program suppliers to major cable operators and telcos.

To support all this content, the company also creates more than 10,000 pieces of promotional video each year to help MSOs promote their Pay-Per-View (PPV) and Video-On-Demand (VOD) offerings. The New York-based iN DEMAND, owned jointly by Comcast, Cox Communications, Time Warner Cable and Bright House Networks, (and serving many more affiliates) has a thriving in-house post production and creative services group to create these promos. Plus, iN DEMAND also serves as production headquarters of Howard TV On Demand, the subscription VOD service from "The Howard Stern Show," which includes daily highlights from Stern's satellite radio show, original programming and archived content.

Scaling Promo Content with FS2
The promotional pieces that iN DEMAND creates are mostly destined for systems' "barker" channels to advertise VOD and PPV shows. For instance, to promote Movies On Demand, film studios send footage to iN DEMAND in various formats, leaving Koby and his team to edit clips together for an original program that also features a host filmed on green screen. Koby receives a range of HD and SD content that must be edited together and down-converted to 4x3 SD footage, which is then squeezed into the cable guide preview window. To appropriately scale the content, iN DEMAND relies on AJA's FS2 converters.

"What the FS2 does really well," shared Koby, "is that with scaling, you don't get any interlace artifacts or abnormalities and the video is situated perfectly in the squeezed barker channel window."

Koby and his team strive to bring the most professional, highest quality content to iN DEMAND's cable clients and the FS2 allows them to do so very cost effectively.

"To get the best quality video, you need to process live video through good hardware - like the FS2. We are able to up-res or down-res through the device, rather than just scaling in NLE software, which makes a tremendous difference. With the FS2, we not only deliver top-notch quality to cable companies, but at a fraction of the cost," Koby explained.

Saving Time and Resources with Ki Pro Rack
After routing content through the FS2 to upconvert or scale, the material is sent to an AJA Ki Pro Rack, which iN DEMAND recently began using as a VTR alternative. The Ki Pro API automatically downloads any files onto the network every ten seconds, streamlining a process that used to take additional manpower and was subject to human error. Using the Ki Pro along with an Io XT, one crew member can easily record and send content to a transcoder, rather than the prior method which required at least two machine room operators.

"I like that we can retain the original time code for the field with the Ki Pro, especially since we often end up scaling and repositioning the materials," noted Koby. "It's also a nice clean write to the SAN volume, which is useful when capturing with set in and out points."

Syncing Stern Feeds
In addition to creating promotional content, iN DEMAND has produced Howard Stern's on demand subscription digital cable channel, Howard TV On Demand, for the past seven years. Koby uses AJA tools to keep the production running smoothly. iN DEMAND's control room manages 19 remote cameras, which capture the shock jock's uncensored radio show. The SiriusXM show director and crew make a live program cut of the show, recording at least three of the ISOs to tape. Simultaneously, two FS2 video feeds are routed via fiber to an iN DEMAND edit facility located four miles away. Sitting on either side of the feed, the FS2s help provide clean, consistent video that is run through independent frame syncs so that the computers constantly receive a strong signal even if the feed drops out.

Stern's show is recorded to computers using AJA KONA 3G capture cards and just:in from ToolsOnAir software, which lets Koby and his team edit while ingesting. Time codes for each feed are embedded as an audio channel, and the signal is then passed through the FS2 and de-embedded with an AJA HD10AMA or HD10AM Mini-Converter.

"We create over 640 hours of programming each year for Howard TV, so our workflow needs to be fast and effective. AJA solutions help us simplify our pipeline and are very affordable," Koby said.

Mini-Converters for 3D Production
Using Hi5-3D Mini-Converters with a 5.1 audio setup, iN DEMAND tackles 3D projects for On Demand and produces 3D content for Comcast channel XFINITY 3D. For releases made available on this channel, Koby and his team add stereo slates on the front and back and complete a quality control check.

"We are responsible for a tremendous amount of content in a variety of formats and our AJA gear more than handles everything we could possibly throw at it. Our workflow is so powerful and flexible that we can easily adapt to the changing needs of our clients, and we look forward to working with AJA in the future," concluded Koby.

About AJA Video Systems, Inc.
Since 1993, AJA Video has been a leading manufacturer of high-quality and cost-effective digital video interface, conversion and Desktop solutions supporting the professional broadcast and post- production markets. With headquarters in Grass Valley, California, AJA maintains an extensive sales channel of dealers and systems integrators around the world.