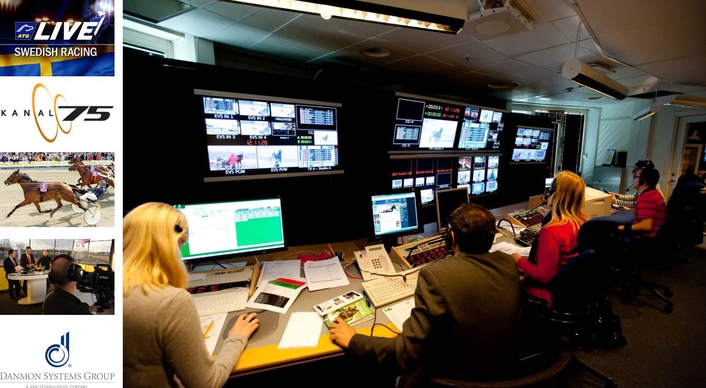 .
Danmon Systems Group announces the completion of a full migration to file-based high-definition production for Scandinavian sports broadcaster Kanal 75. Based at the Solvalla stadium in Stockholm, Kanal 75 is a subsidiary of AB Trav och Galopp, the authorised betting company for trotting and thoroughbred horse-racing in Sweden.

“We record around 1,300 Swedish and international horse-racing events each year, local and international, and transmit more than 100 hours of original television every week,” comments Kanal 75’s director of technology Johan Eriksson. “Danmon Systems Group designed and installed the original technical facilities at our Solvalla headquarters and partnered with us on this new project. Progressing to file-based high-definition enables us to deliver images that look fantastic even on very large public-venue video display screens. You feel like you are actually attending the live event."

“We’re very excited about the possibilities that this new infrastructure introduces,” adds Kanal 75’s Assistant Technical Director Robert Svensson. “An EVS IPDirector suite is being used for ingest scheduling, clipping, streaming, production content management and playout control. IPDirector also handles the logging of races and delivery to our web distribution platform, linked to ATG’s betting data feed. Content recorded and logged on the EVS production system is transferred to a shared storage and checked in to the Interplay for archiving.

“Kanal 75 is an outstandingly efficient network and has used server-based technology from the outset,” states Danmon Systems Group’s Deputy Managing Director Peter Thomsen. “This is the latest phase in a large project which includes expanded routing and monitoring. We also integrated a media asset management system from Avid plus a file-based archive to form a cohesive infrastructure. The new system makes optimal use of metadata, allowing production teams to search, browse and retrieve material without the limitations inherent in hybrid and discrete-media libraries. The transition to 1080-line content acquisition and post-production will greatly enhance the viewing experience.”

Since its birth in January 2000, Kanal 75 has rapidly grown to become one of Sweden's largest producers of television and internet content. Its programmes can be seen on TV4 Sweden, at ATG betting shops or on the internet. Kanal 75's productions are also accessible in Australia, South Africa, the USA and some 20 European countries. Kanal 75 own news agency and an internet service can be used by other media to access news, features, photos, starting lists and results.