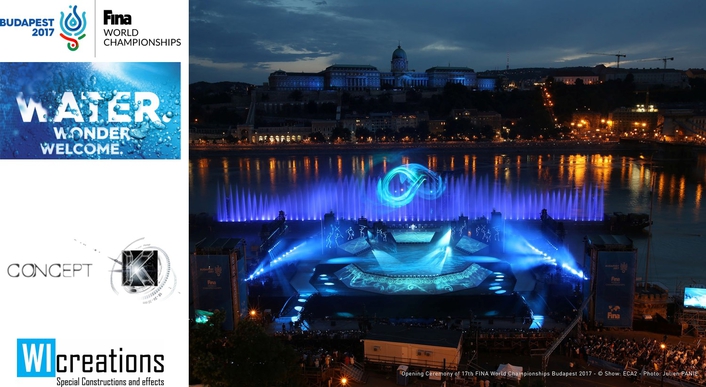 WIcreations was contacted by Guillaume Duflot from EC2A, responsible for delivering full technical production for the event, and asked to provide rigging and structures involving a number of bespoke black-steel elements, together with their extensive expertise and knowledge of working in large scale outdoor environments. The WI project was led by Koen Peeters, and on-site crew chiefed by Stano Kusik.

The stunning panoramic setting for the FINA OC show included a massive custom-built floating stage, moored on the Danube, with Budapest’s landmark Chain Bridge on stage left. A second floating setup containing the curved tower structures and pyro was built at a nearby shipyard and finally tugged into place in two sections.

The whole scene was overlooked by the magnificent Baroque Buda Castle perched on the top of the hill opposite. The long, grandiose building was lit, video mapped and played an important part in the show which also featured some jaw-dropping water fountain artistry … accentuating the overall water theme. A cast of several hundred were onstage performing through the two hour show. 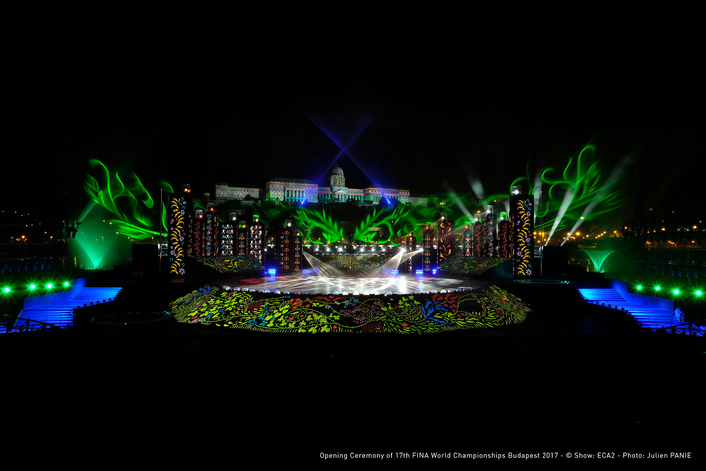 Getting lighting, sound, water and gas jets and other AV and technical elements – including machines for the high-impact projections onto the stage – into exactly the right positions required a number of specific structural pieces.

These pieces had to maintain the overall aesthetics and the curved towers also had to stand in temporary water-filled basins feeding the water jets.

The trussing portals were designed to be lowered quickly if necessary, to respond to fluctuations in the wind speed on site.

All of these WI structures had to be built safely on floating barges and meet all the rigorous health & safety regulations.

WI had previously created some curved towers for the 2013 Circle of Light Moscow International Festival … however this time the loading was substantially greater and more complex, as the curves were out-rigged with lights, sound kit and pyro plus 2D and 3D water jets.

All these challenges alone were enough … but on top of that … the fourth stop of the Red Bull Air Race 2017 World Championship … was taking place during the construction period!

For this … no structures above 8 metres in height were allowed anywhere near the race route … which traversed central Budapest and went along the river! So the OC structural build had to be scheduled in two phases. 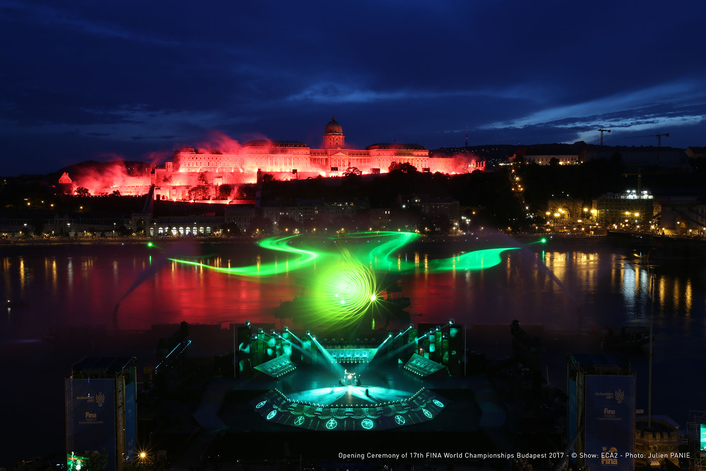 The towers and portals were initially built to a height of 8 metres and once the Red Bull Air Race was completed, continued up to their full height.

The first build phase - up to 8 metres – took place on the quayside, after which the structures were lifted onto the barges. They and the various kit that destined to be rigged on them was effectively stored in the barges until after the Air Race … when the barges were towed out to their final ‘event positions’ and anchored.

The towers were then lifted onto the bases, complete with an amount of pre-installed production kit, a careful move involving cranes – also on floating barges – assisting with the final manoeuvring of the metalwork into place.

Each truss level of the portals was also pre-assembled on the quayside, then lifted onto the barges and then, in phase two of the installation process, the top sections were lifted into their final positions.

Co-ordinating the crew and kit needed some clever logistics to ensure an efficient workflow was maintained across the two build sites.

The WI base crew of four was reinforced by another two which enabled two teams of three  to operate for day and night shifts during the crucial phases of the installation. Once the structures were assembled, one crew person remained on standby and one of their responsibilities was to make the call to lower the portals in case of bad weather. This only had to happen once and luckily this was during the programming period. 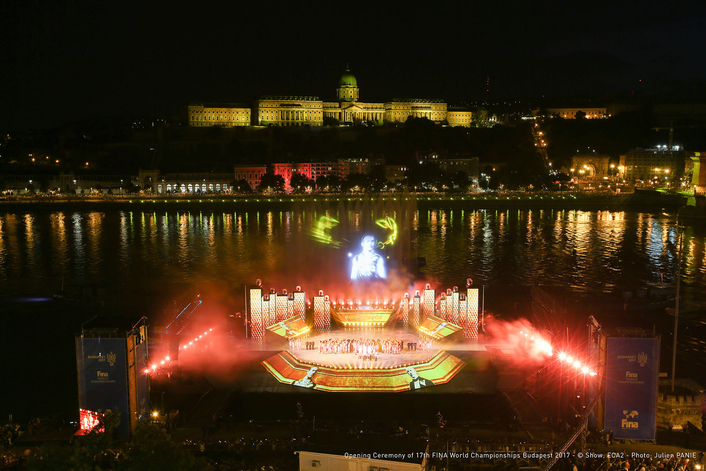 For the get-out, the crew was again bolstered to six and the overall build period was around ten days (including a break for the RB event), which is quick for a complex site with some galvanising restrictions to contend with!

The event’s lighting designer was Frédéric “Aldo” Fayard from Concept K in Paris and PRG France supplied sound, lighting and video. The amazing water fountains were designed by the renowned Crystal Group from Paris. 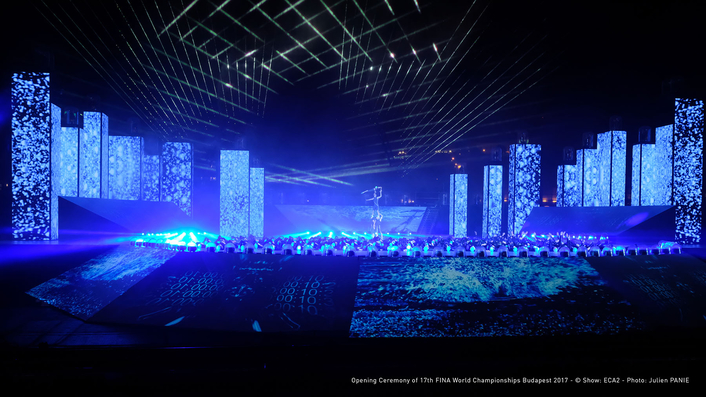 “We enjoyed all the challenges, the brain teasers, the teamwork and the camaraderie” confirmed Koen, adding, “the show looked amazing! We were all very proud of being part of the bigger team delivering a highly acclaimed and much appreciated visual spectacular that beautifully united show performance with its immediate environment”.