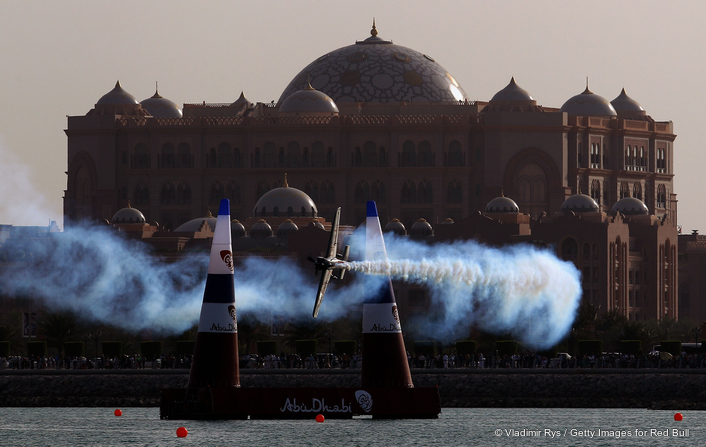 Hannes Arch of Austria in action during the Red Bull Air Race Qualifying session on March 26, 2010 in Abu Dhabi

Some spectacular airborne action was seen in the skies over Abu Dhabi on the weekend of 26th and 27th March as the Emirati capital hosted the Red Bull Air Race for its sixth consecutive year.

With 15 of the world’s top race pilots battling for championship points, this race marked the start of an exciting 2010 season. As a popular fixture on the Red Bull Air Race calendar since the World Championship officially began in 2005, Abu Dhabi’s warm temperatures and changeable winds makes this race one of the most challenging in the schedule. 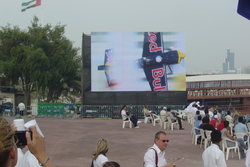 Creative Technology once again provided audio visual solutions to enhance the spectators’ experience of the high altitude spectacular. Dutch event company, Faber Audiovisuals, asked CT to provide two screens to complete the array of AV equipment laid out for the event. Providing an 8 x 6 panel Lighthouse R7 and a further 8 x 6 Mitsubishi OD10, this is not the first time CT have been asked to provide screens at this event.

As Stuart Young, CT’s Project Manager, remarks: “The screens were shipped directly out of the Bahrain F1 GP straight to Abu Dhabi for the Red Bull Air Race. Many would shudder at the tight deadlines we were working on but to us it is no real issue as we’ve plenty of experience in managing logistical challenges such as these.”

The first race of the 2010 season saw the reigning champion, Paul Bonhomme from the UK, win in front of the large crowd of spectators. The Championship now sees a further seven races spread over five continents over six months, including a first ever race held in New York in June, before the Red Bull Air Race comes to a close in Lisbon, Portugal, in September.