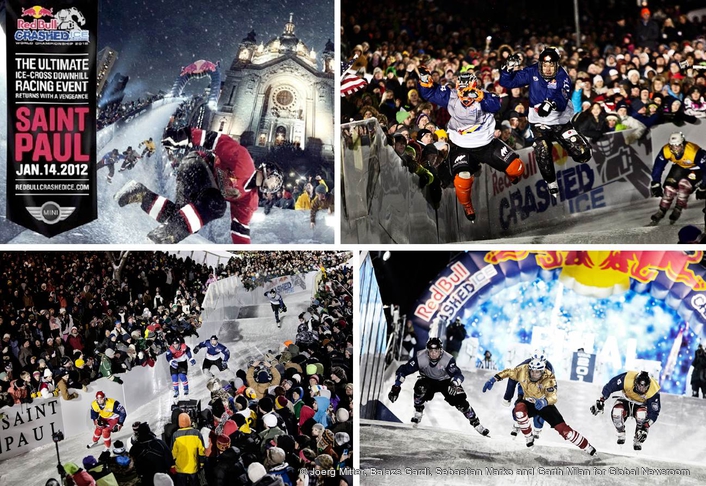 Kyle Croxall had a flawless run in the finals of the 2012 Red Bull Crashed Ice season opener on Saturday down the 406-meter long ice track filled with jumps, bumps and mind-boggling twists and turns, rallying from just behind the Finn to end Pihlainen’s three-race winning streak. Pihlainen lost his balance on a jump near the bottom for a split second and crashed hard into the boards. He fell to third place before recovering to win a photo finish for second ahead of Scott Croxall.

Despite pre-race snowfall and temperatures that fell far below freezing, a frenzied crowd cheered the 64 finalists from 24 nations as they raced down the most challenging track in Red Bull Crashed Ice history as it weaved its way from Cathedral of Saint Paul downhill towards the banks of the frozen Mississippi River. There were a number of monumental crashes on the high-speed track as racers hit speeds of up to 40 mph and the level of competition took a leap forward from 2011. Five of the 19 Americans made it to the round of 32 but were ousted by the more experienced Europeans.

“It was an insane race,” said Kyle Croxall, a towering Canadian who was exhausted but smiling after picking up his third career victory and first since the 2011 season opener in Munich. “Arttu is so hard to beat. Saint Paul put on an awesome event. It was the hardest track ever. The fans were amazing. As soon as the U.S. guys were out, they were cheering for the next closest country. That got us (Canadians) fired up for the final.” 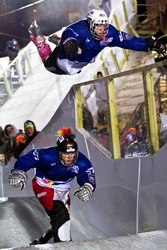 American Cameron Naasz won the MINI Rookie Award as best newcomer. The world championship now moves to Valkenburg on February 3-4. It will be the second time the town in the Netherlands has hosted the race.