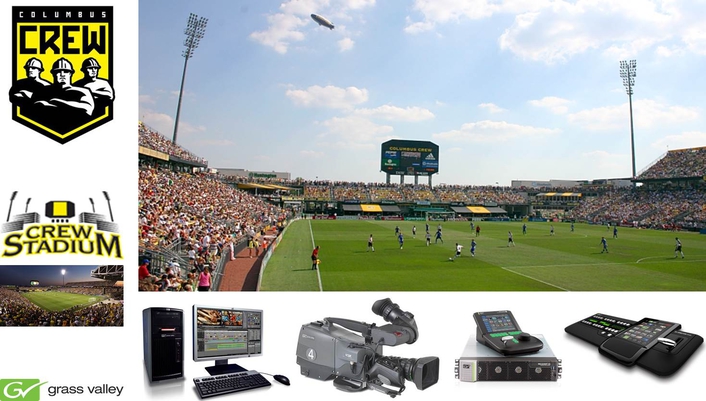 The stadium’s new video boards will deliver an exciting, high-quality viewing experience for fans during Major League Soccer games. Situated throughout the stadium, the boards will be most prominent on the facility’s south side main scoreboard. The installation is being managed by iVideo Technologies and is expected to be complete by March 22, when the Columbus Crew kicks off its 16th season of Major League Soccer.

“As a team of firsts that prides itself on having the original topflight soccer-specific stadium in the United States, we believe in delivering a premier fan experience, and utilizing innovative technologies is a part of that process,” said Ryan Smith, Crew Stadium General Manager. “In choosing technology partners for this project, we were looking for proven leaders in their field that offered the best and most advanced solutions in live sports production. Grass Valley’s knowledge of the live sports market and their forward-thinking approach made this decision easy.”

“Crew Stadium is an important venue in the world of live sports. We’ve created a unique combination of live production technologies so that its staff can harness a powerful and efficient workflow—delivering high-quality content across the new video boards,” said Andy Jackson, Senior Vice President of North America, Grass Valley. “Crew’s choice in selecting our live production solutions is further testament to our commitment in the live sports market, where we continue to thrive as a leader.”

About Crew Stadium
Crew Stadium is the first ever soccer-specific stadium in Major League Soccer. It opened its doors on May 15, 1999 to a sell-out crowd for a match against the New England Revolution. It has hosted numerous national and international events: eight U.S. Soccer FIFA World Cup Qualifiers – specifically four consecutive “Dos a Cero” victories for the U.S. over Mexico (2001, 2005, 2009, 2013) -- FIFA Women's World Cup matches and a number of concerts, including the annual three-day festival Rock on the Range, Kenny Chesney and Jason Aldean. In 2008 the venue added a permanent stage in the North End, allowing for up to 35,000 fans to take in concerts and other marquee events.

About Grass Valley
Grass Valley is changing the way live television is made and delivered. Recognized with 18 Emmy® Awards for technology innovation, Grass Valley’s product portfolio—from image acquisition to playout—offers a complete end-to-end workflow of flexible, forward thinking solutions which enable broadcasters and content owners to build multiscreen, multiplatform futures. By simplifying and enhancing the way content is produced and distributed, Grass Valley gives customers the freedom they need to be creative in the studio, the field, and the newsroom. Merging optimizations of IT technologies with best-in-breed media systems, Grass Valley’s next generation solutions deliver higher quality and greater efficiencies. Customers include world-leading broadcasters, teleproduction facilities, service providers, government, religious, educational, corporate, and independent video professionals. Grass Valley is headquartered in Hillsboro, OR, and maintains local presence across the globe with offices throughout North and Latin America, Europe, the Middle East, and Asia-Pacific regions.