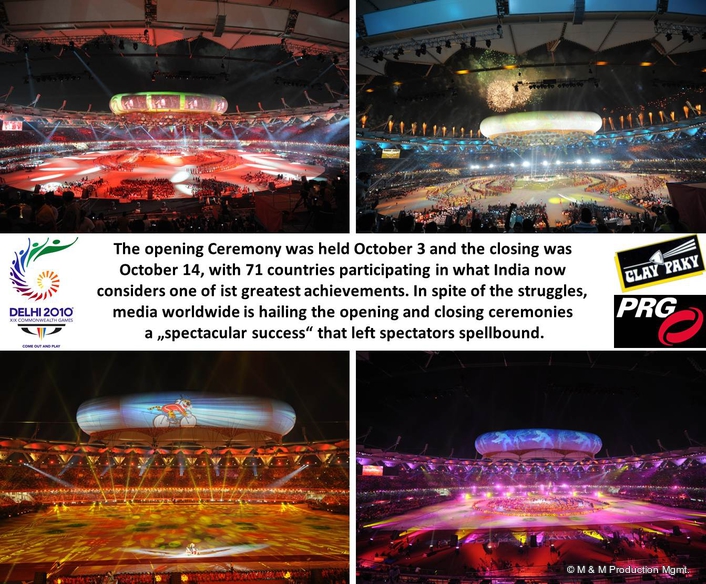 PRG supplied all lighting, which included 44 Clay Paky Alpha Beam 1500, 24 Alpha Beam, 144 AlphAlpha Spot HPE 1500 fixtures
Clay Paky was a star performer at the recent opening and closing ceremonies of the 19th Commonwealth Games, broadcast live from Jawaharlal Nehru stadium in New Delhi, India. Despite highly publicised concerns about the quality of accommodation in the Athletes' Village and unfinished building works in and around the stadium, the Games managed to go on as planned and the ceremonies were considered an enormous success.

The Commonwealth Games, held every four years, features athletes from the the Commonwealth of Nations. This was the first year for the event to be held in India. Prince Charles officially opened the Games, following a 3-hour ceremony showcasing India’s history, cultural diversity, varied art forms, music and dance with over 4000 performers, pyrotechnics and a stunning light display.

The centrepiece for the ceremonies involved a huge helium balloon, the aerostat, floating above the stadium and the 55,000 spectators. The aerostat measured a whopping 80 metres long (260 feet), 40 metres wide (130 feet) and 12 metres high (40 feet). Worth approximately 9 million dollars (making this the most expensive Commonwealth Games in history), the aerostat was raised to a height of 25 metres (100 feet) above the field of play for the ceremonies and served as a 360-degree projection surface. The underside of the aerostat was covered with 172 2.4-metre diameter (7.8 feet) mirror disks, which reflected lighting from the ground. The shape of the balloon was similar to a donut, with the inside rigged with the Alpha Beam 300 fixtures to supply lighting effects from above down to the field.

The Alpha Beam 1500 and Alpha Spot HPE 1500 fixtures were located mid-level around the stadium, providing added front light and moving light effects for the ceremonies. Lighting Designer Jerry Appelt says of the Clay Paky fixtures, “They were great, as always. They kept up with some heavy-duty lights including Space Cannons but allowed me to create more complex and dynamic looks thanks to their speed and sharpness. I definitely enjoy working with Clay Paky fixtures – they perform above average every time.”

The technical crew began working on site at the stadium on August 15, but planning commenced four years ago when India received the handover from Melbourne, Australia. Ola Melzig, Technical Director for Ceremonies explained, “The show was not without its share of challenges, one of which was getting the mass of equipment into the venue on time. There were delays in customs and the venue was not adequately prepared for the arrival of the crew in terms of furniture, air conditioning, or protection for the track. Because the stadium was to be used during the Games, and the equipment arrived before the armour deck protection, sheets of plywood had to be hand placed section by section to allow trucks and forklifts to get all the equipment in position. In addition, August is monsoon season, so heavy rains slowed the progress. We had generator issues as well, with a shut down followed soon after by a 330V peak killing somewhere around 300 moving lights. Fortunately the Clay Paky fixtures were surprisingly resilient.”

“No one could have predicted the problems these lights had to face,” said PRG Project Manager Johannes Wahl, “from generator spikes to heavy rain to high winds causing props to crash into the fixtures inside the aerostat, but the Clay Paky fixtures held up amazingly well.”

The programming team used a total of 6 grandMA Consoles: 5 Full size consoles (3 active, 2 Backup) and one grandMA Ultra Light as Focus-Console and for service tasks during the show. They ran two sessions; one for all the Alpha Spots and Alpha Beams plus some GLP Impressions, programmed by Marc Brunkhardt, as well as the ground level Space Cannons and Biglites, programmed by Denis Hessberger and about 800 permanently installed LED fixtures used to light the roof of the stadium programmed by Thomas Giegerich. A second session was for wash lights, programmed by Martin Rupprecht. The programming team had to run two sessions because there were too many NSPs and PortNodes Pro to run them all in one session. Pre-programming was done by Olivier Legendre with wysiwyg and programming was carried out in a studio in Delhi (sans air conditioning!) Total lighting used approximately 62 DMX Universes.

The opening ceremony was held October 3 and the closing was October 14, with 71 countries participating in what India now considers one of its greatest achievements. In spite of the struggles, media worldwide is hailing the opening and closing ceremonies a “spectacular success” that left spectators spellbound.

A short sample from the Opening Ceremonies