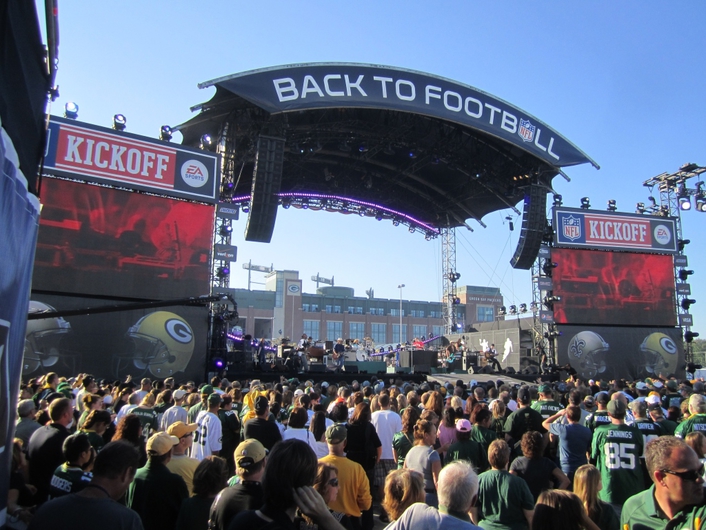 Spike deployed 36 Sharpy moving heads, which he acquired from Atomic Lighting in Lititz, Pennsylvania
A large complement of Clay Paky Sharpy moving heads welcomed the start of the pro football season at the “NFL Kick Off 2011 Presented by EA Sports,” the high-energy, pre-game concert which aired live on NBC from the parking lot at Lambeau Field, home of the Super Bowl champion Green Bay Packers.

The tradition of the NFL Kick Off started in Times Square in 2001 as a pre-game public event tying entertainment and sports together,” says Spike Lloyd, the show’s lighting designer.  “This year the concert in Green Bay featured Kid Rock, Maroon 5 and Lady Antebellum.  It started at 3 pm and went until 6:30.”

Spike deployed 36 Sharpy moving heads, which he acquired from Atomic Lighting in Lititz, Pennsylvania.  “We used them at the back of the stage as floor lights very tightly packed” and directed upstage of the band on a scenic piece shaped like a skateboard ramp tucked under the stage’s arched roof. “We also hung a dozen off the stadium behind the stage,” about 400 feet away where they bordered a series of four huge video screens hung from the stadium’s open staircase.

The Sharpys were great little lights; I liked them a lot,” says Spike.  “I didn’t know if they’d work, especially given the daylight conditions of the show.  But they were amazing.  They cut through LEDs and were fantastic at creating the beams we needed in daylight.”

Spike and his gaffer Dave Hunkins, who served as co-lighting designer on the NFL Kick Off, were introduced to Sharpy by Atomic Lighting.  “We were looking for a device to be a source behind the talent – something not too obtrusive yet a strong source, which is a real trick with daylight,” Hunkins recalls.  “We saw how the Sharpys were used on a Univision program that Atomic did, and Atomic showed us how cool they were.”

Hunkins calls the Sharpy fixtures “very impressive little units” that turned out to be the right size and right application for NFL Kick Off.  “In a way, it was somewhat unfortunate that the show was staged during the day because at night the Sharpys seem to go on forever,” he says.  “But I could see the sunlight pouring through the haze upstage and at the same time I could see the Sharpys cutting through that sunlight – it was absolutely ridiculous!”

Sharpy is a 189W moving head with an unprecedented brightness usually achievable only with far greater wattages. Tipping the scales at just 16 kg, Sharpy produces a perfectly parallel, laser-like beam with an incredible output of 5,100 footcandles at 65 feet.  Sharpy is also groundbreaking in the purity of its beam, which is sharply defined and free of any halo or discoloration around the edges.  It offers an interchangeable color wheel with 14 fixed colors and an interchangeable gobo wheel with 17 fixed gobos, allowing users to change the shape of the beam and create an array of spectacular mid-air effects.  Sharpy features new, high-performance electronics and can perform rapid and extensive pan-and-tilt movements.

At Atomic Lighting, Vice President of Operations Brett Puwalski reports that Sharpy is “the hottest light on the market now. Everyone wants them and we can never have enough.  People like their tight beam, small footprint and powerful light output for their size.”

I had heard good things about Sharpy, but now I’ve seen them at work,” says Spike, “and I will definitely use them again.”