ChyronHego Partners With Fraunhofer IIS to Market and Develop GoalRef 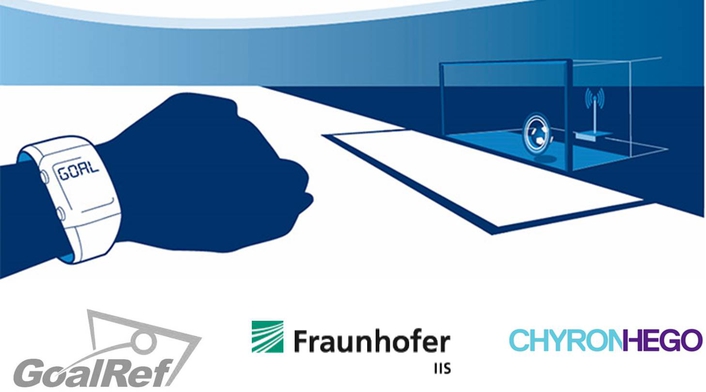 Innovative Goal-Line Technology Enables Accurate and Precise Measurement of Ball's Position for Assisting Goal Decisions
In its ongoing commitment to provide best-of-breed technologies for the world's most popular sports, ChyronHego today announced a new licensing agreement with the renowned Fraunhofer IIS. Under the agreement, ChyronHego will bring to market Fraunhofer's GoalRef system, a Goal-Line Technology (GLT) solution for measuring whether a goal has been scored or not.

The Fraunhofer GoalRef system, which is licensed by FIFA, is a highly innovative approach to GLT that uses a magnetic field within the goal and a specially designed ball bladder within the balls supplied by most major ball manufacturers. The system can accurately and precisely determine whether a ball has crossed the goal-line or not, even if the ball is completely hidden from view. Once a goal is detected, the system communicates through a dedicated, secure, and encrypted wireless network to a specially designed watch that indicates the goal visually and through vibration to the referee. As a licensee of the GoalRef technology, ChyronHego will continue to develop the system by applying its own special expertise in compelling, intuitive, and visually impressive replays of goal-line events, which can be used either by broadcasters or on big screens in stadiums.

"At ChyronHego, we're excited to have entered into regulatory assistance within football; in fact, we have been considering possible solutions to the goal-line challenge for a number of years. One possible scenario we had considered in the past was to provide this as a capability of our award-winning camera-based Tracab live player-tracking system, already in widespread use by many of the top football leagues around the world," said Ian Wray, sports industry director, ChyronHego. "However, by partnering with Fraunhofer IIS, we firmly believe we have identified the ideal technology approach in providing the highest level of accuracy required in all circumstances to assist in this very important aspect of the game. We strongly believe that the Fraunhofer GoalRef technology offers the most practical and cost-effective solution for goal-line technology to be more widely deployed, and also provides us with a stable platform to offer further innovation in the future if the IFAB decide to amend the Laws of the Game to allow the use of additional technology as a support for referees."

"Fraunhofer solutions keep our clients in the sport industry competitive and successful. Through this licensing agreement, ChyronHego will bring all the necessary components to the table for GoalRef to be effectively deployed for leagues and tournaments," said Thomas von der Grün, head of department locating and communication systems at Fraunhofer IIS. "We are especially excited by the opportunities that ChyronHego brings to the table with their graphics technology and video expertise to create visually compelling and intuitive visualization replays. We look forward to working in close cooperation with ChyronHego moving forward on this and other related initiatives."

About Fraunhofer IIS
The Fraunhofer-Gesellschaft is the leading organization for applied research in Europe. Its research activities are conducted by 67 institutes and research units at locations throughout Germany. The Fraunhofer-Gesellschaft employs a staff of more than 23,000, who work with an annual research budget totaling 2 billion euros.
Founded in 1985, Fraunhofer Institute for Integrated Circuits IIS in Erlangen, Germany, ranks first among the Fraunhofer Institutes concerning headcount and revenues. With the creation of mp3 and the co-development of AAC, Fraunhofer IIS has reached worldwide recognition.
Sport technologies engineering has been a core competency of Fraunhofer IIS for more than 10 years. To help avoid incorrect goal decisions, Fraunhofer IIS has developed a radio-based system called GoalRef. Using low-frequency magnetic fields, it reliably determines whether or not the whole ball has passed over the goal line.

About ChyronHego
ChyronHego is a global leader in broadcast graphics creation, playout and real-time data visualization with a wide range of products and services for live television, news and sports production. Joining forces in 2013 with over 80 years of combined industry expertise, Chyron and Hego Group offer award-winning solutions — such as the TRACAB™ player tracking system and the end-to-end BlueNet™ graphics workflow — under the collective ChyronHego brand. Headquartered in Melville, N.Y., the company also has offices in the Czech Republic, Denmark, Finland, Germany, Mexico, Norway, Singapore, Slovak Republic, Sweden, and the United Kingdom.