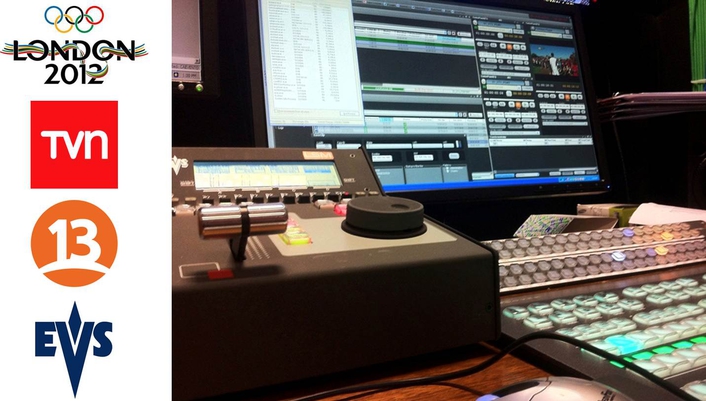 TVN and Canal 13 with EVS XT3 at the Olympic Games in London
EVS, a leading provider of broadcast and media production systems for sports, news and TV entertainment, has announced that two TV stations in Chile have chosen EVS solutions for their coverage of the international sporting events taking place in London this summer.

With a major focus on sports programming, Canal 13 decided to renew its collaboration with EVS following the successful deployment of EVS solutions in Beijing. Chile’s state-owned TV station TVN has chosen to deploy EVS solutions for the first time at such a big event. They’ll be used for a mixture of programming, but focusing on news updates from the major sports competitions in London.

Both South American broadcasters needed a reliable playout system that would easily integrate with Avid systems. Canal 13 also needed its system to integrate with the host broadcasting organization’s media server. After extensive testing in Santiago, both companies decided to deploy EVS’ six-channel XT3 servers, along with its IPDirector suite of video production management applications for complete content control, and XTAccess software for media interchange between EVS production servers and third-party tools.“We’re very pleased to be playing a pivotal role in enabling South American broadcasters to air these international sporting events,” said Benjamin Mariage, sales manager for EVS Latin America. “We strive to offer the fastest and most reliable technology on the market, and our growing list of customers reassures us that we’re answering the needs of the industry.”

Canal 13 chose EVS solutions as its main playout system based on their ability to integrate well with its tapeless workflow. It has deployed an XT3 server configured with four channels for recording and two for playout. With native support for a wide range of codecs, the XT3 will support Canal 13’s AVC-Intra and XDCam workflows. One IPDirector suite will be used for logging, browsing and playout, while another will be used for browsing clips on the host broadcasting organization’s media server. EVS’ MulticamLSM live slow motion control panel will be used for live editing operations, while XTAccess will support media exchange between the XT3 and Avid editing, storage and server systems.

TVN has deployed an XT3 server and an XS server, each configured with five channels for ingest and one for playout. One IPDirector suite will be used for ingesting, logging and browsing feeds, while another  will manage playout control. XTAccess will support media exchange with Avid editing and storage systems. With its flexible eight-channel SD/HD and six-channel 3D/1080p configurations, EVS’ XT3 server offers complete media control from ingest to playout, including live editing, slow-motion replays, multi-channel playback and media exchange with third-party systems, in demanding live and near-live production environments. The XT3 is the industry’s first server to natively support wide-ranging codecs without requiring hardware changes. Combined with the IPDirector suite, it guarantees successful ingest and enables both Canal 13 and TVN to control recording and live streaming of camera feeds or high-resolution footage from satellites or video tape recorders.