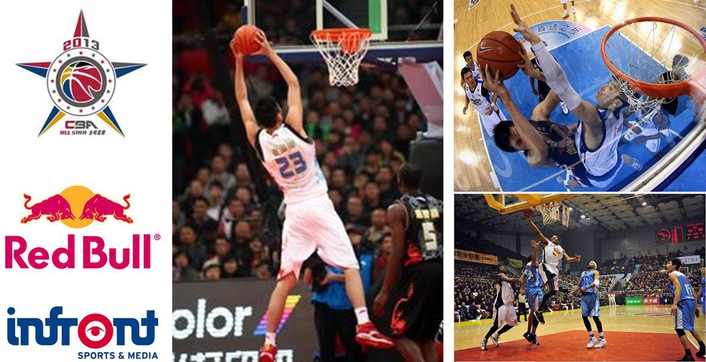 The popularity of the 2013 CBA All-Star weekend is breaking records already ahead of the actual event on 23 and 24 February as this year’s official online ballot hosted by the CBA website and handled by Sohu.com, one of Chinas largest web portals, generated an unprecedented number of fans participating. A total of 4.3 million people voted for their favourite CBA League players – a figure almost four times higher than that of the previous year – 1.1 million in 2012.

The growing appeal of the event has also been bolstered by further sponsorship results that Infront Sports & Media – marketing partner to the CBA Professional League – achieved: A strong line-up of domestic and international companies will associate their brands with the event, which is being held at the Guangzhou International Sports Arena and broadcast live across the country on CCTV-5.

Chinese basketball sponsorship taking a quantum leap
In a new agreement for 2013, Infront has secured Red Bull (energy drink) as the Title Sponsor of the CBA All-Star Three-Point Shoot-out. With the preliminary game taking place on the first day of the CBA All-Star weekend and the final game on the second day, the Three-Point Shoot-out is a special event, which determines the CBA League’s very best three-point shooter. Red Bull will benefit from extensive advertising exposure with branding on LED boards, the medal ceremony backdrop, players’ jerseys and the ball cart. In addition, it will receive hospitality tickets and have its brand logo integrated on the event programme, on tickets and the website all part of a comprehensive sponsorship package which guarantees product category exclusivity during the entire CBA All-Star weekend.

Ma Guoli, Managing Director of Infront China, commented: “The figures of this year’s online fan ballot illustrate just one of the key success points of the CBA’s and Infront’s joint promotional and marketing efforts for the CBA All-Star Game as well as the CBA League as a whole. The results in sponsorship sales are equally impressive – with Red Bull being the most recent example of the platform’s appeal to major brands. As for Li Ning and other big companies, the increasing and sustained value of Chinese basketball as a vehicle to reach a broad consumer base in the Chinese market is widely recognised and can easily bear comparison with other major international events as a hugely influential commercial platform.”

Increased levels of TV exposure expected
A total of 180 reporters from print, online and broadcast media are already accredited to cover the event with over 90% tickets sold as of today. Infront has secured broadcast agreements with a variety of networks, suggesting an increase in levels of exposure over last year’s event which reached an impressive cumulative audience of more than 100 million over the course of the weekend. The TV channels CCTV-5, Beijing TV and GDTV Sports, Shanghai TV Sports, as well as the digital media group PERFORM will cover the event live, whilst One World Sports will air delayed broadcasts. Media production is being handled by CCTV 5 and GDTV Sports jointly. The production will be in 3D as well.