InfoCaster replaces static, backlit signage displays, and was a key building block in a new focus on connecting with fans at Rogers Arena, home of the Vancouver Canucks.  Canucks Sports and Entertainment, which also owns Rogers Arena, has seen dramatic increases in fan engagement and sales revenues since installing InfoCaster.  From the moment fans arrive, they’re captivated by dynamic, cinematic displays of video, photos, and other visual elements to enhance the venue experience — an experience that has quickly translated to bottom line benefits. 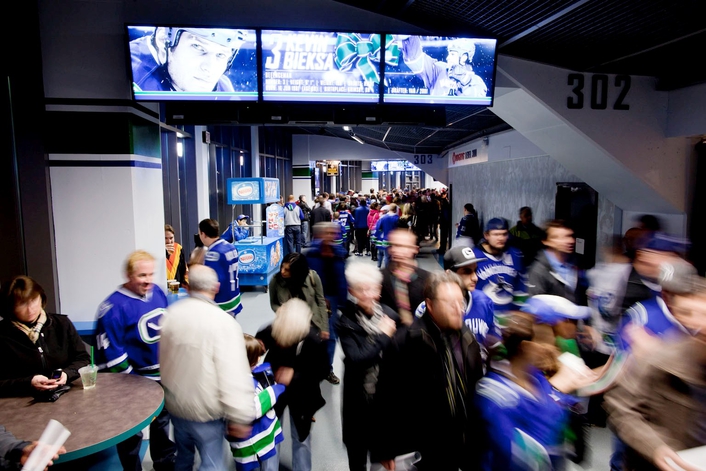 “We nearly doubled revenues associated with the digital signage early on, and have since boosted revenues an additional 25 percent,” said David Comuzzi, senior director of corporate partnerships for Canucks Sports and Entertainment.  “This has led to a rapid return on investment.”

“Our goal was to use environmental branding to create captivating imagery and storytelling that builds excitement for the game, fosters an affinity for our players and team, and builds life-long relationships with our fans,” said Mark Raham, creative director for Canucks Sports and Entertainment. “We also wanted to project a strong, positive brand image, develop partnership revenue, and promote ticket sales and merchandise.  This is part of our overall approach to delivering an amazing fan experience, and digital signage is a key touchpoint.  In just two years, our fan surveys and market research show greater fan loyalty and enthusiasm for the Canucks.” 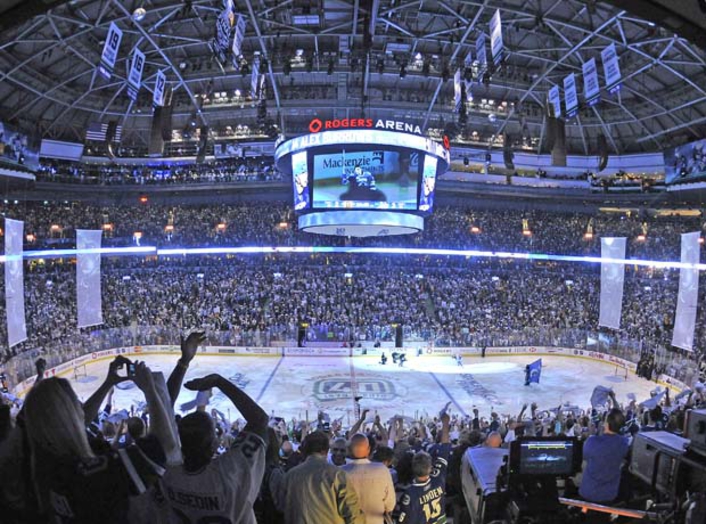 Canucks Sports and Entertainment was drawn to InfoCaster because it’s user-friendly, flexible and capable of automating the delivery of different content to targeted, multi-zone displays.  For example, content spans the entire three-screen concourse banner prior to the game.  During the game, content appears only on the first and third screens while the middle display shows the game.  Menus can be changed quickly and accurately on over one hundred concession area displays, and player profiles and fan photos are updated on a regular basis.

“We have a massive library of HD video, stills and animated graphics that we need to schedule and deliver in a precise, synchronized sequence across designated screen sets, and this content is scheduled according to different programming blocks such as pre-game, in-game, intermission and post-game,” said Karl Pedersen, digital media technician with Canucks Sports and Entertainment. “Without such sophisticated, application-specific software integrated with the hardware, it would be very labor-intensive and daunting to deliver such a spectacular digital signage experience.”

The InfoCaster installation at Rogers Arena consists of several powerful components including InfoCaster Creator, which has a wide array of tools and templates for the design, authoring and creation process; and InfoCaster Manager for remote network management and control of numerous InfoCaster Player devices.  InfoCaster software manages the scheduling process, automating ad and promotional content placements across groups of displays to target specific audiences.

Harris Broadcast is an industry leader in delivering the most advanced, content-rich media experiences available for a wide spectrum of radio, television and private media networks around the globe.  With more than 25 leading brands including Versio™, Selenio™ and Maxiva™, the company enables media organizations to tap into one of the broadest, integrated product and solution portfolios in the industry. Headquartered in Denver, Colorado, the company is widely recognized for its product quality and reliability, engineering excellence and customer service, and has earned nearly 100 technological firsts and more than 50 awards for technical innovation.