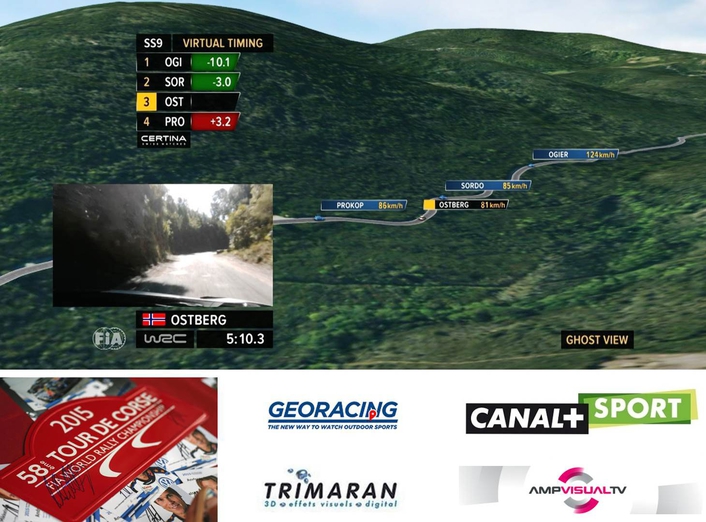 "When it comes to live sports coverage, providing our viewers with the most up-to-date information, in real time, is critical," said François-Charles Bideaux, head of sports programs at Canal+ Group. "Trimaran's GeoRacing system dramatically improves our ability to deliver live audio commentary about the race, giving viewers a live comparison of the pilots in addition to a variety of other important stats. By allowing us to deliver in-depth sports information and statistics, above and beyond what is traditionally offered by broadcasters, GeoRacing boosts our viewer satisfaction."

During the Tour de Corse race, Canal+ used multiple cameras with GPS trackers in cars and helicopters, and at the starting, mid-point, and arriving lines. The GPS tracking system situated on the cameras was provided by AMPVisual TV, a technology partner of Canal+ and Trimaran.

Throughout the race, GPS positioning from each of the cars was emitted to the GeoRacing system. Utilizing Trimaran's solution, Canal+ instantly delivered detailed sports information and statistics, such as speed, timing (retiming for starts staggered), and ranking. By enabling viewers to better understand the progression of the live race, Canal+ increased their satisfaction with the coverage.

The GeoRacing system features virtual timing and ghost visualization technologies, designed to provide television viewers with unique evaluations of the race. Leveraging the virtual timing capability, Canal+ was able to demonstrate the virtual differences between cars at a precision of 1/10th of a second. Trimaran's ghost visualization feature provides a 3D representation of the rival positions in real time, creating the feeling that the cars all left the starting line simultaneously.

Intuitive and easy to use, GeoRacing dramatically simplifies broadcast media coverage of sports events. No dedicated software or plug-ins are needed; all that's required is an Internet connection. The solution is available as a 2D offering accessible on the GeoRacing portal and apps for tablets and smartphones, or as a 3D solution that is produced from Trimaran's control room located in Paris, or on the spot for an event with live broadcasting video facilities.

"Canal+ has been a loyal Trimaran customer for years, having used the GeoRacing solution to broadcast a variety of prominent WRC rally races," said Olivier Emery, Trimaran CEO. "The GeoRacing system is unlike any other sports technology on the market, enabling broadcasters like Canal+ to transform live television reporting of outdoor races, whether at sea, on land, or in the air, utilizing GPS data and sophisticated visualization technologies." 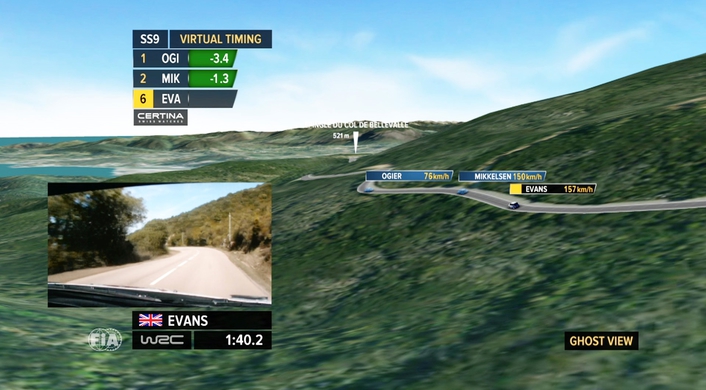 The GeoRacing solution has been nominated for the Golden Podium Awards, a prestigious contest held at the SPORTEL convention, honoring sports footage broadcast over the last year. Trimaran was nominated in the Innovation category for enhancing Canal+ live television coverage of the 2014 Rallye de France-Alsace with the help of technology partner AMP Visual TV. Winners will be announced during an awards ceremony Tuesday, Oct. 13, 2015.

About Trimaran and GeoRacing Solutions
Trimaran is an audiovisual post-production company that specializes in CGI, 3D animation, and visual effects solutions for the broadcast television, cinema, and enterprise markets. Using the company's innovative GeoRacing Virtual Timing System, broadcasters can monitor and visualize outdoor sporting events in real time to provide the ultimate television experience to viewers.