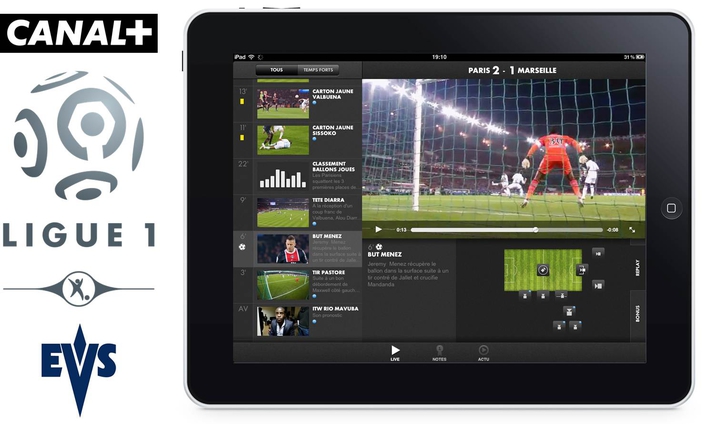 Belgian provider of high-speed broadcast production technology provides second screen solution for live football coverage
To kick off the new Ligue 1 season with a bang, Canal Plus, the French pay-TV broadcaster, has introduced Canal Football App, a second screen application designed exclusively for Canal Plus subscribers. The app, which uses EVS’ second screen media delivery platform, C-Cast, was successfully launched during the live broadcast of the first headline match of the season between Stade de Reims and Olympique de Marseille.

The new app, conceptualised by CANAL+ Sports with the help of the engineering department at CANAL+ and the NetcoSports group for the design and the interface, is the first of its kind providing up-to-the-minute statistics, multicam video clips of all the highlights and bonus material such as Super Slow Motion action replays in full length. It also features filmed reactions from the commentators and special guests from Canal Plus’ live football programme, Canal Football Club, as well as the possibility to interact via social networks. The app is available on iOS for iPad users, and since the beginning of this month on Android for those using Samsung Galaxy tablets.

All of the app’s content is fed through EVS’ C-Cast; its automated hardware and software solution. C-Cast instantly processes and transfers live multicam media recorded on EVS’ XT/XS production servers, along with descriptive metadata and third-party items (graphics and statistics), direct to web-connected tablets with the Canal Football App.

C-Cast was easily integrated into our existing EVS live production infrastructure, and coupled with the added value that it brings, marginal production costs can be quickly recovered,’ explained François-Charles Bideaux, director of sports production at Canal Plus. ‘With this new tool and our experience in live football coverage, Canal Plus is setting itself apart by providing expert analysis from those who know and love the game, while also providing a unique multi-screen football experience that will increase the engagement of the fans and give them more control over the content they want to see. CANAL+ is providing this new service during the live coverage of all 76 headline matches per season for the next four seasons.’

During the match, Euro Media France, who were in charge of the production process, created clips and associated metadata, such as keywords describing the action and timecode references, using EVS’ content production management suite, IPDirector. Key action shots and their references were then automatically transferred to C-Cast’s central database, where they were available in multiple angles, and in a proxy file format - made possible by EVS’ synchronised multicam recording process. Graphics showing match statistics - created with Symah Vision technology - were also integrated into the database using the system’s advanced API architecture. As a result, the C-Cast database could feed the linked web interface with the packaged media, in less than two minutes, direct to the football fans.

‘C-Cast truly personalises the viewer’s experience,” added Nicolas Tissier, project manager of the Canal Football App at Canal Plus. ‘Just seconds after a clip has been created it’s instantly available on the app’s timeline for review. Users can then select any camera in the stadium or on the pitch to view the action from their preferred angle.’