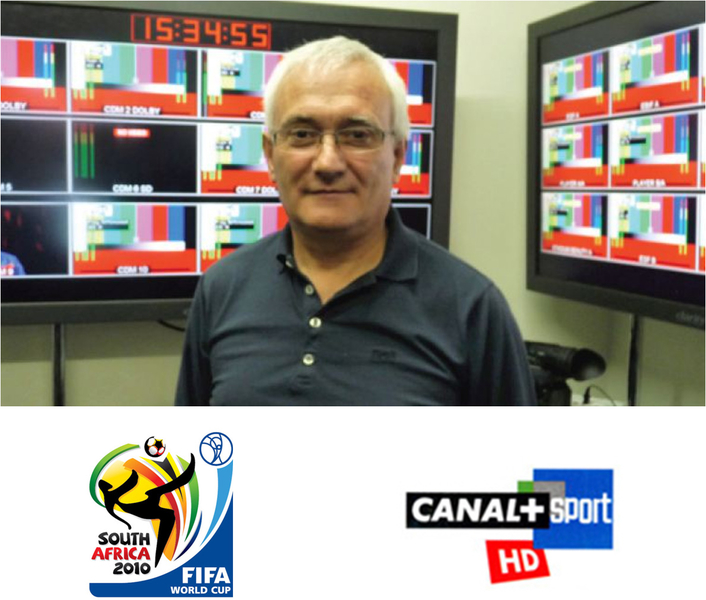 Patrice Boyer - 37 live matches
When TF1 agreed to sell some of its 2010 FIFA World Cup™ broadcast rights on to Canal+, the latter French MRL most likely had a mixed reac­tion. As the first ever pay-channel in France, Canal+ is well known for having built its success on a two-pronged reliance on films and foot­ball, so it would have been some­what inconceivable for them not to offer the 2010 FIFA World Cup™ to their subscribers. But since this agreement only occurred in February of this year, it also left very little time to get organised.

“We came a bit late to the party,” says Technical Manager Patrice Boyer with a smile, “but we’ve managed just fine,” after HBS was able to find Canal+ a small space in Hall 7. This was happy news, yet the size of the space did force Patrice and his team to make some changes to their usual methodology and leave more of the editing work to their Paris head­quarters. “Technically speaking it’s been very smooth, there’ve been no particular worries,” explains Patrice. “We use the HBS multi-feeds and supplement them with coverage from our unilateral cameras. We also had eight ENG teams around the country at the start of the tournament, of which three remain.” All of this footage is sent back to France via ten outgoing HD feeds, as are selected clips from the FIFA MAX Server.

The arrangement between Canal+ and TF1 allowed the pay-channel to show all 64 matches of the tournament, of which 37 live, reinforcing its image and credibility as a true home for football. Its daily FIFA World Cup™-themed news show Canal Football Club has been watched by an average 900,000 subscribers, almost twice as many as watched its equivalent offering in 2006.