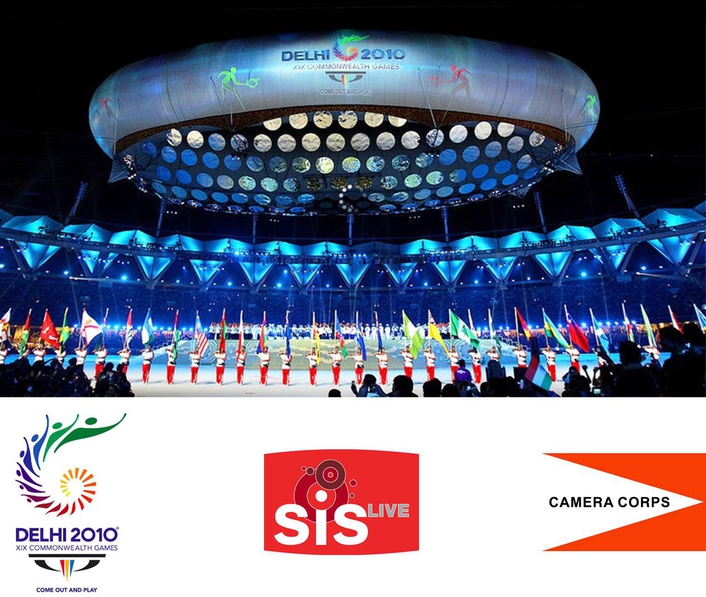 Opening ceremony of the 2010 Commonwealth Games in progress at the Jawaharlal Nehru Stadium, Delhi.
Working in partnership with SIS Live, Camera Corps is providing the speciality camera systems for the 2010 Commonwealth Games in Delhi. A wide range of equipment including remote heads, tracking systems and Q-Ball compact robotic cameras have been supplied. All are being supported and maintained throughout the event by experienced SIS/Camera Corps technicians.

The opening ceremony, held in the massive Jawaharlal Nehru Stadium, was transmitted to a global audience of 3 billion. In addition to this, a further 14 venues are being used around the city. All events are being covered in their entirety in 1080i high-definition.

Weather conditions have proved an even greater challenge to the SIS/Camera Corps team. Monsoon rain and high humidity have stretched not only the equipment to its limit but also the ingenuity and resourcefulness of all the technicians and engineers involved. Camera Corps' team of specialist climbers found that rigging cameras and remote heads in very inaccessible and awkward positions, sometimes way above the venue roof line, often proved "an interesting challenge", especially in pouring rain and 80 per cent humidity.

The Commonwealth Games were first held in 1930 as the British Empire Games, at Hamilton, Canada. They moved to London in 1934, Sydney in 1938, Auckland in 1950 and then settled into their current four-year cycle, most recently at Melbourne in 2006. Organised by the Indian Olympic Association on behalf of the Commonwealth Games Federation, the 2010 Commonwealth Games are the 19th in the series. The games will conclude with an official handover to the city of Glasgow which will host the event in 2014.