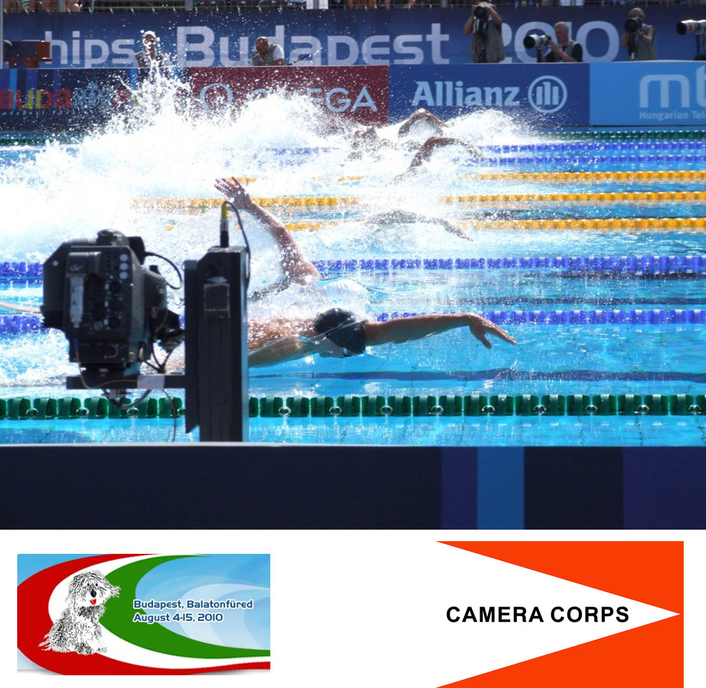 "The championships were held outdoors from August 4 to 15 at the Hajos Alfred-Tamas Szchy venue on Margaret Island," explains Operations Manager Matt Frost. “ We commenced installation and testing on the first day of August. The entire event was captured in high definition. It followed the general pattern of the 2009 World Swimming Championships in Rome which we covered for FINA."

Camera Corps' underwater remote camera consists of a Hitachi HV-HD30 in a waterproof housing attached to a motorised pan and tilt head. Weighing 40 kg, it sits firmly on the floor of the pool and captures underwater views of individual swimmers as they approach and turn at the end of each lap, including 'touch' and 'push-off'. The heads were also used to capture each diver's entrance into the water with the operator able to follow the action from initial take-off through to their entrance and exit from the pool. The system allowed easy and quick repositioning for the different disciplines.

High level shots of the diving events were captured using a combination of Hitachi DKH-32 cameras on MiniShot pan and tilt heads. Operated via a Camera Corps Joystick, it allowed a single operator to control three of the diving cameras from a single unit. The Mini-Shot provides smooth control of pan, tilt, zoom and focus. It was used in conjunction with Camera Corps CCU Panel to give access to all available camera functions via a single XLR cable. A slip-ring in the lateral rotation mechanism permits unrestricted horizontal movement. Variable speed controls allow pan and tilt to be preset over a wide range.

The poolside track used in Budapest was Camera Corps' Standard Tracking System with a Hot Shot pan and tilt head, specially adapted for use near water to conform with health and safety regulations. Running the full length of the pool, this can be smoothly accelerated under full remote control. It transported the camera approximately 65 km throughout the event.