Brio drives the green for U.S. Open and other CP Communications sports productions 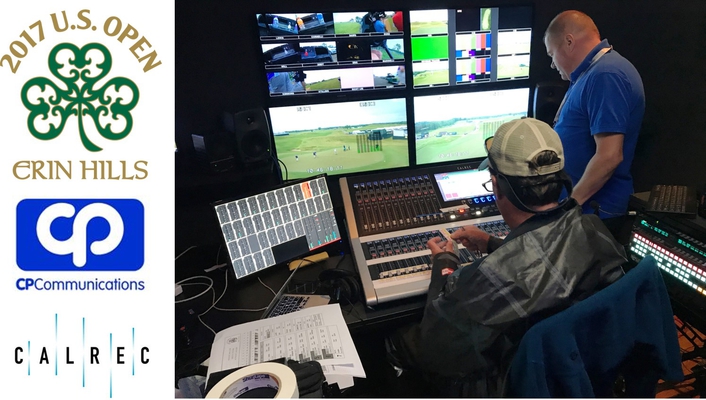 CP Communications, a full-service broadcast equipment rental and production company, is relying on a quartet of Calrec Audio's Brio compact digital audio consoles to deliver high-quality live sound for Fox Sports' marquee coverage of pro golf, baseball, and football. CP Communications first deployed the new Brios for the U.S. Open in June, where they worked in concert with several other Calrec desks on a Hydra2 network to help overcome the complex logistical challenges of audio mixing from the sprawling Erin Hills golf course in Erin, Wisconsin.

"Capturing and broadcasting golf is challenging on so many levels. You have to cover all 18 holes simultaneously at tee boxes, greens, and fairways. Then add in scores of players to cover — at the U.S. Open, there were 156 — and you can see what an enormous task this was," said Kurt Heitmann, senior vice president of sales and marketing, CP Communications. "One of the big reasons we chose the Brios is their ability to talk to each other and other Calrec desks on a production. For the Open, Fox Sports was already using Calrecs in its trucks, and putting the Brios on the course gave us instant connectivity with those other desks via Hydra2.

"The Brios may be compact, but they pack some powerful and flexible functionality. For instance, we were able to use each Brio in a split formation that let us mix the action on two holes at the same time. That setup helped us make sure we didn't miss any aspect of play."

At the Erin Hills course, CP Communications deployed the Brios to work in concert with EVS servers for tape replay. The new desks were networked over Hydra2 with two other Brios, two Calrec Artemis consoles, and a Calrec Summa and Apollo installed in Fox Sports' hired production trucks.

In the split operation, each Brio console gave the engineer a left and right router for covering any two combinations of live holes, greens, tees, or taped holes. Each desk had access to more than 3,000 inputs that delivered the mixed audio over a single, 64-channel MADI stream. Each Brio also handled monitoring for both left side/left speaker and right side/right speaker. Multicam audio/video synchronization was easily managed thanks to Brio's ability to provide two inputs on each channel, with independent delay times.

Following the U.S. Open, CP Communications used combinations of the Brios to provide tape-release submixes for the U.S. Women's Open, the U.S. Senior Open, and the U.S. Junior, Girls', and Women's Amateur Championship tournaments. With one of the Brios still in use for golf, the other three are now being prepped for Fox Sports' pro baseball and football coverage.

In addition to the Calrec desks, CP Communications also has a very large installation of audio consoles from DiGiCo, Calrec's sister company, including 17 DiGiCo S21 desks that are able to communicate seamlessly with the Brios over MADI connections. The Brios also provide an ideal complement to the company's fleet of six RF trucks, all of which are equipped with DiGiCo SD-10B 32-channel audio consoles.

"You just can't beat Brio's form factor for a wide-ranging outdoor event like a golf tournament. It fits our rental business model really well, since we ship audio-mixing consoles out in our flight packs rather than installing them in trucks," Heitmann said. "Calrec is the undisputed leader in this field, so we were excited when they came out with the Brio — it meant we could finally bring Calrec desks into our repertoire."