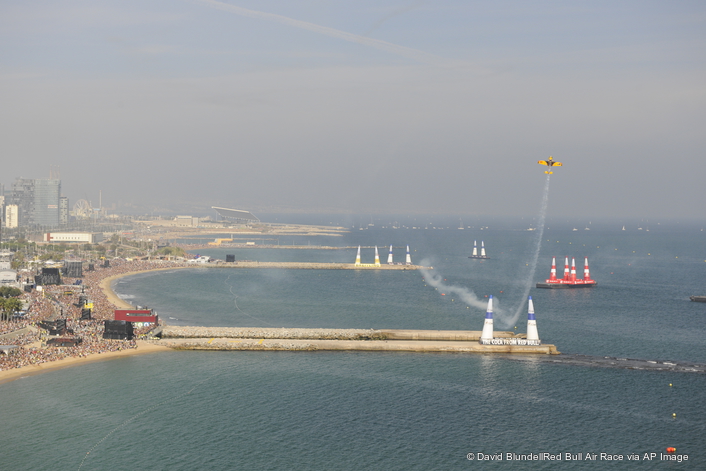 Australian pilot Matt Hall at the final round of the 2009 Red Bull Air Race World Championship in Barcelona, Spain
Britain’s Paul Bonhomme won the 2009 Red Bull Air Race World Championship on Sunday with a thrilling victory in the final race of the season in Barcelona in front of a record crowd of 800,000 spectators, holding off a ferocious challenge from defending champion Hannes Arch of Austria. Bonhomme had finished a heartbreaking second in both 2007 and 2008 but got the elusive first title with a sensational performance under pressure to clinch his first title with 67 championship points to Arch’s 60. Australia’s Matt Hall took 3rd place overall, the best result ever for a rookie, with 36 points. 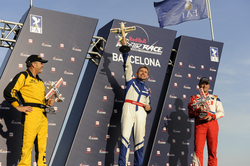 On a gorgeous day in Barcelona with temperatures around 25 degrees, Britain’s Nigel Lamb got the first podium of an otherwise disappointing season with second place after a brilliant performance in the final on the 6.4-km long track through a challenging 15-Air Gate obstacle course set up just metres above the surface of the Mediterranean. German rookie Matthias Dolderer treated the largest crowd of the season packed along the Front Maritim beaches to some fancy flying to take third place, his first podium.

“Fantastic, thank you Barcelona,” Bonhomme said after letting out a loud shout for joy when he heard the news he had won the title on his cockpit radio. He had watched his four-point lead melt to three on Saturday when Arch won the 1 point for fastest Qualifying time. “I'm very happy. It's been a lot of hard work but we got there in the end. It's been a huge amount of pressure. It's just a question of how you deal with it at the right time. I thought I'd better get my skates on and that worked.” 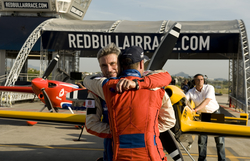 Bonhomme was the epitome of consistency with three victories and three second places even though his Edge 540 plane was not as fast as Arch’s for most of the season. Arch had outclassed Bonhomme in the Qualifying sessions this year, winning the 1 point three times compared to just once for Bonhomme. The two were the protagonists of the most riveting championship battle in the five-year history of the Red Bull Air Race World Championship. 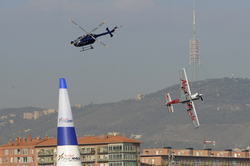 “It was a real good fight all year,” said Arch, who warmly congratulated Bonhomme after their pulsating duel was finally over. “Paul didn’t get anything for free. I was always setting the fastest times and pushing him. I had to go all out in the final. You can’t win if you sit on the brakes. I’m really happy with my performance. There’s nothing to be disappointed about. I gave everything I had. We’ll see what happens next year.” 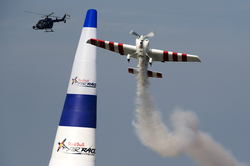 Two other rookies ended the season on a high note. Japan’s Yoshi Muroya had a career-best sixth place and Canada’s Pete McLeod got 12th, his second-best result. But it was a disappointing race for Americans Kirby Chambliss (5th), Michael Goulian (11th) and Mike Mangold (14th). Spain’s Alejandro Maclean was hoping to give the fans in his home country a strong showing but finished 10th. A total of 1.2 million spectators enjoyed the weekend’s racing, the most exciting this season.