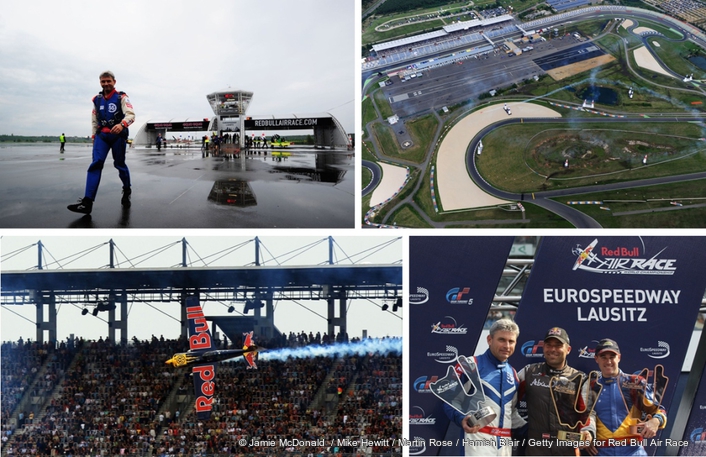 Action on the Eurospeedway during the Red Bull Air Race World Championships Final on June 8, 2010
Britain's Paul Bonhomme won the 2010 Red Bull Air Race World Championship by taking second place behind Austria's Hannes Arch in the final race of the season at the EuroSpeedway Lausitz in Germany on Sunday. In another thrilling duel, Australia’s Matt Hall got the third podium of his career with third place in the 50th race in the sport’s history while Germany’s Matthias Dolderer finished seventh to the delight of the big home crowd. A total of 118,000 spectators watched the racing this weekend.

Bonhomme, who also won the 2009 championship, finished the six-race season with 64 points and two victories, in Abu Dhabi and New York. Arch, the 2008 champion, ends the year with 60 points and four wins, in Perth, Rio, Windsor and Germany. Britain's Nigel Lamb ended up third overall on 55 points.

Arch stopped the clock through the 15-gate track set up in the infield of the EuroSpeedway Lausitz race track in 1:12.30 while Bonhomme took second in 1:12.66 and Hall was in 1:17.41 - hurt by four seconds in penalties. Lamb was knocked out of the Final Four due to a flat tire suffered just before take-off. 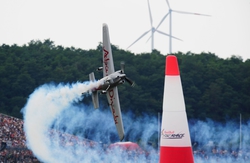 “It’s very special,” Bonhomme said, who let out a loud celebration cheer over his cockpit radio after he clinched the title. Bonhomme, the most successful pilot in the history of the sport with 13 career victories, admitted he was disappointed that he failed to beat Arch in the season finale even though he did get a record 13th straight podium with second place on a sunny afternoon in Germany.

“It feels good,” Bonhomme said. “The key thing is that we won back-to-back championships, that’s what I’m going to be taking away. I’ve been saying all year I’ve been relaxed and had stayed that way right up to this race. But I knew this race could make or break the whole championship. The day didn’t go exactly as I planned but I’m very pleased about the whole year.” Bonhomme is the first pilot to win back-to-back titles and joins American Mike Mangold as the only two-time champion in the eight-year race history. 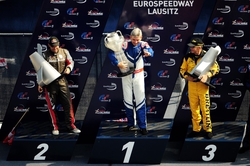 Arch, who now has seven career wins, pushed Bonhomme to the limits all season and kept the pressure on his British rival to the final round. Bonhomme had posted faster times than Arch all weekend and had won the Qualifying point earlier on Sunday. But Arch pulled out all the stops in the Final Four, posting a blistering time that Bonhomme could not match.

“I knew I could win the race because the plane is fast and it’s a fast track,” Arch said, taking great satisfaction about winning four of the six races this year. “We might not have won the championship but we have four races and have lots of track records this year. We’re happy about that, it’s a good feeling.“

Bonhomme, Arch, Lamb, Hall and Dolderer told a news conference after the race they hoped the race would return to the EuroSpeedway in the future. “It’s a superb venue,” Bonhomme said. “We’re a motor racing sport and we worked beautifully together. I hope that when the Air Race season fires up again we have a lot more venues like this and that we indeed come back here again as well.”