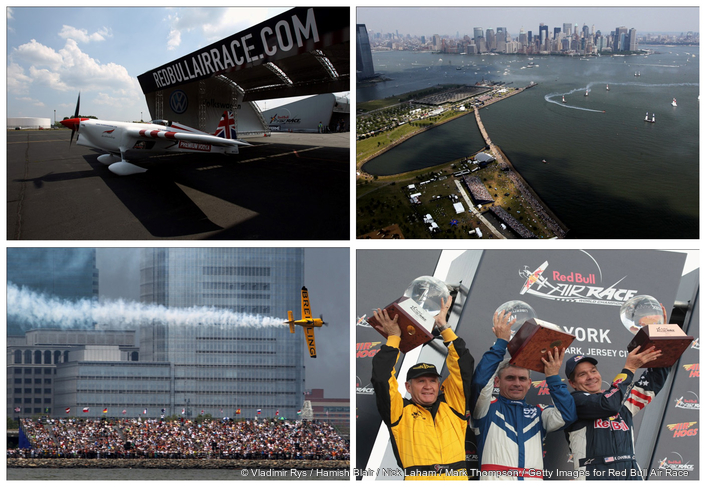 Action on the Hudson River during the Red Bull Air Race New York Race Day on June 20, 2010 in New Jersey
Paul Bonhomme of Britain won the first-ever Red Bull Air Race in New York on Sunday with a scintillating performance under pressure in front of the most spectacular setting in the eight-year history of the sport. Nigel Lamb took second place in a thrilling four-way battle between the Statue of Liberty and Lower Manhattan while American Kirby Chambliss got his second straight podium with third place.

Bonhomme, the defending champion, prevailed in front of a huge crowd of 75,000 spectators watching from both sides of the Hudson River and a live U.S. television audience with one superb run after another through three pressure-packed rounds. Bonhomme had finished behind Arch for the last three races and was desperate to get back on top after the Team Abu Dhabi racer cut his lead in the championship to just one point. Arch pushed Bonhomme to his limits but saw his three-race winning streak shattered in dramatic fashion when he hit a pylon in the final 4 ending any hope of a podium finish. 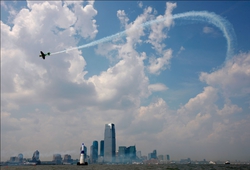 Bonhomme stopped the clock at 1:10.01, the day's fastest time on the 5.5-km track of 13 Air Gates set up on the majestic Hudson River between the Statue of Liberty and New York's breathtaking skyline. Bonhomme had been the epitome of consistency with times of 1:10.09 in the Top 12 round and 1:10.07 in the Super 8 before lowering the mark again to 1:10.01 in the final. That was a full 2.05 seconds faster than Lamb and 2.08 faster than Chambliss. Arch was 5.34 back -- hurt by the six-second penalty for hitting the pylon.

It was Bonhomme’s 12th straight podium -- a record -- and he now leads the championship with 53 points while Arch is second overall with 48 points. Team Breitling’s Nigel Lamb is third on 47 and Chambliss has 35. 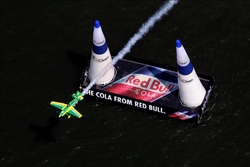 “It's very good -- and what a setting,” Bonhomme said. “I can appreciate the view now that I’ve finished racing. Great day. I concentrated on me, my airplane and the track. And now I think we can celebrate a bit.” Lamb, who got his third second-place finish this year after getting the same result in Abu Dhabi and Rio de Janeiro, called it “a fantastic result”. Chambliss, the 2006 world champion, was delighted to be on the podium in his home race. “As an American, I’m very, very proud,” he said. “It’ll sink-in in a while. I have to personally thank Hannes for hitting that gate. Thank you Hannes!”

Arch was gracious in defeat on the biggest stage in the 49-race history of the Red Bull Air Race, a city where organizers have dreamed of staging a race since the world’s fastest growing motorsport was launched in 2003. It has been a FAI recognized world championship competition since 2005. Arch said he pulled out the stops to try to beat Bonhomme and get what would have been a record fourth straight victory and just barely hit the Air Gate, an inflatable pylon that he clipped with his wing. 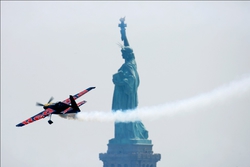 “It was a good run,” said Arch, the 2008 champion. “It was just a couple of centimeters that made the difference. I would rather lose here like that in style, going for it, than completely screw it up. So I think those guys in front of me owe me a beer.”

The New York race was the fifth in the eight-race championship. It was a bit of a disappointment for the other American, Michael Goulian. The man from Massachusetts finished seventh. Pete McLeod of Canada, by contrast, had an excellent race and finished fifth to move up to fifth place in the championship with 29 points.