Anton/Bauer, Autoscript, Litepanels, Sachtler and Vinten Contribute to Successful Formula for Smooth Broadcast
Bexel has a history of supporting the world’s largest live sporting events, so it was no surprise that when FOX Sports needed engineering and broadcast solutions for the days of live coverage leading up to Super Bowl XLVIII and the network’s pre-game coverage, they called in Bexel. Also, part of the network’s game plan was Autoscript teleprompters, Litepanels LED fixtures, and a mix of Vinten and Sachtler camera supports using Anton/Bauer batteries and chargers, which all contributed to the precise execution of one of the biggest days in American sports.

Bexel brought a team of 20 engineers and technicians to link a new street-level studio in Times Square (part of NYC’s “Super Bowl Boulevard”) to a file-based edit facility inside Manhattan’s Millennium Hotel, and to a similar studio set and edit facility inside MetLife Stadium, in New Jersey (where the game took place). Both FOX Sports studios were also outfitted with Litepanels 1x1 and Sola series LED fixtures, and Autoscript and Vinten. 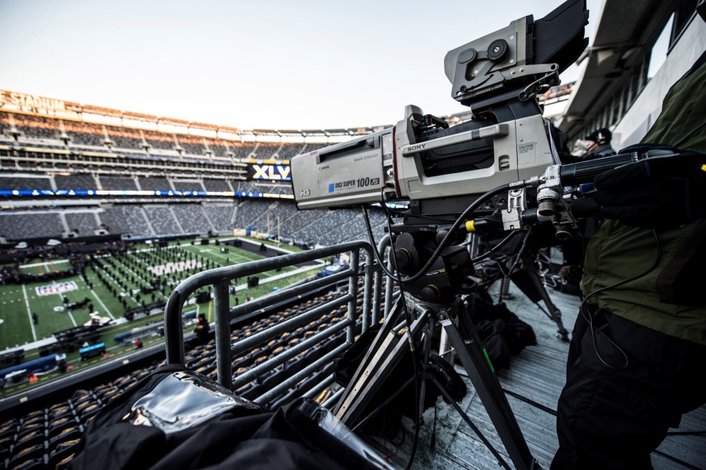 This year’s production, seen by 111.5 million people, leveraged a special and highly portable fiber-optic cabling infrastructure, provided by Bexel. This included two 72-strand runs in Times Square connecting the street set with the edit facility at the nearby Millennium Hotel and the facilities in MetLife Stadium, a few miles away. There was also several thousand feet of fiber at the Stadium linking various production pieces together. Bexel also provided conversion boxes and signal distribution technology to move signals from one place to the other.

“The Bexel team supplied much of the glue for this production, including fiber-optic cabling to handle all of the short-haul, high-definition video runs between the Times Square studio, our editing facility a few blocks away in a hotel, and between NYC and MetLife Stadium,” said Mike Davies, vice president of Field and Technical Operations for FOX Sports. “Each time we’ve worked with Bexel we always find them to be very knowledgeable and prepared for whatever we throw at them. We’ve really come to rely on their expertise to do the things we need to create programming viewers want to watch. 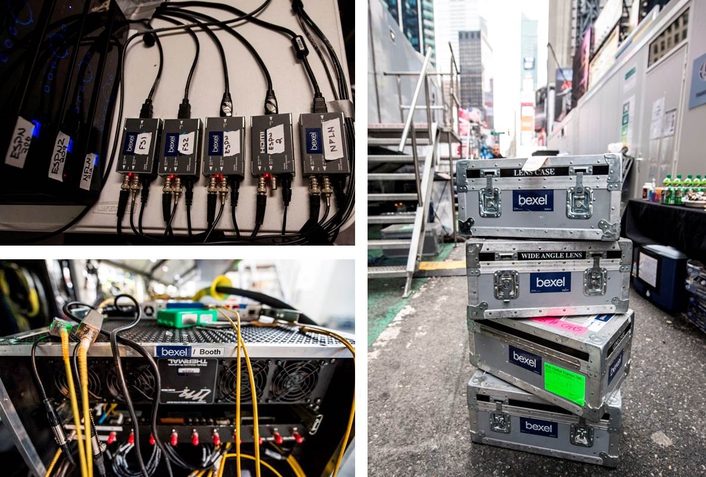 “The challenge was providing enough capacity to move those HD signals back and forth,” Davies notes, “and doing it redundantly to ensure reliability. Bexel helped out a great deal in planning and implementing that infrastructure and figuring out the logistics of making it all work, including what equipment we’d need to do what we needed to accomplish.”

Of course, keeping track of all those fiber feeds was another major challenge, but Bexel solved it by setting up a 32-channel IPTV system, which allowed FOX Sports personnel to monitor the various incoming and outgoing program feeds between locations. In fact, the Millennium Hotel and MetLife stadium had identical 16-channel units set up, and both worked seamlessly together without a glitch. 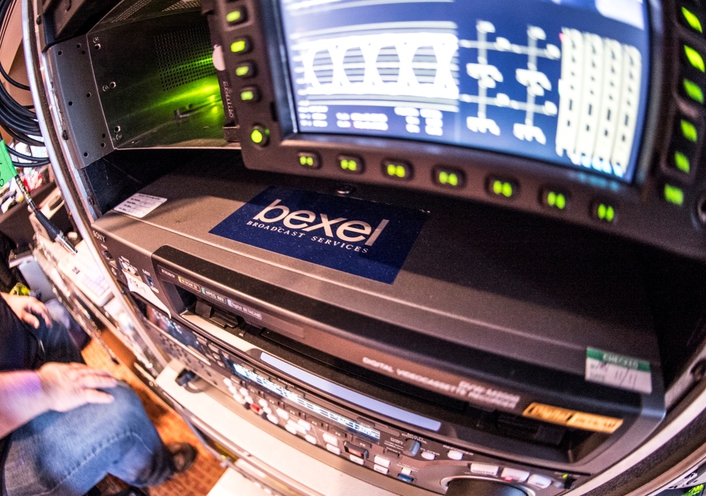 Bexel also worked with a third-party post-production company called Thumbwar, (based in Calif.) to set up a fully working edit workflow—complete with content stored on a 48 TB SAN—for production of graphics and video packages. Inside a seventh floor suite at the Millennium, Bexel staff worked with Thumbwar to network eight Apple Final Cut Pro workstations, two Autodesk Smoke systems, and several Adobe After Effects systems, in addition to ingest and logging stations. FOX Sports staff also had seamless access to the network inside MetLife Stadium as well. In fact, the Bexel/Thumbwar team configured two mirrored systems so that editors could work from either location without missing a beat.

“Once again, we have learned to rely on Bexel’s expertise in working with other teams, like Thumbwar, to give our people the tools and delivery solutions they need,” Davies said. “That’s very valuable to us at FOX Sports.” 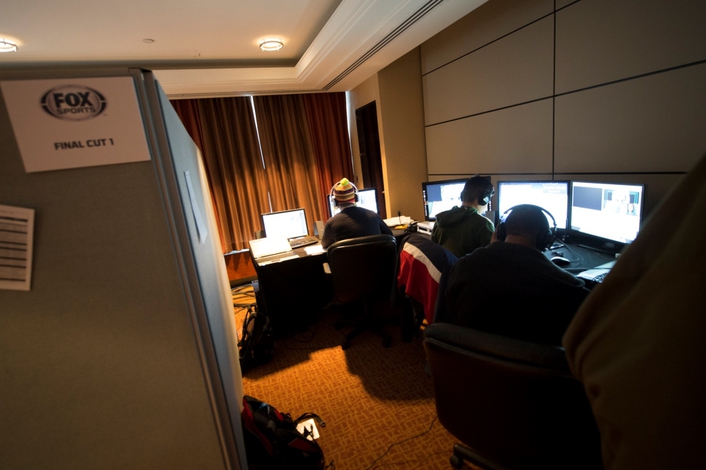 Litepanels fixtures used on set during pre-game festivities and the Super Bowl itself provided big benefits for the crew and talent, Davies said. In particular, FOX Sports has been a big fan of the Sola 6 Fresnel fixtures, which he said provide the performance of a large Fresnel (the industry workhorse in terms of lighting), but operate a lot cooler and with less power due to the unit’s built-in LED technology. The daylight-balanced Sola 6 also offers FOX Sports the controllability and light-shaping properties inherent in a Fresnel light. The fixtures draw a small fraction of the power of conventional Fresnel fixtures, and like the rest of Sola Series, provides Litepanels’ full-spectrum of quality light.

“At FOX Sports we’re focused on efficiency and have used Litepanels 1x1 panels and Sola 6 fixtures in our production booth and field studios for four years,” Davies said. “We like that they don’t run hot and don’t require much power. On this Super Bowl production, we had them in great abundance in New York’s Times Square and at MetLife Stadium for programming leading up to kickoff. We also used them during the game on our portable Super Bowl set on the field, which was vital for operating such a large OB unit.”

At the end of the blowout game, Davies said that FOX Sports management and the entire crew were extremely pleased with the results. The brands of the Vitec Group’s Videocom division ensured these results by staffing the events with product specialists who kept the workflow running smoothly. This was also a testament to the six to eight months of pre-planning the routing and mapping that were designed and deployed by the Bexel team. 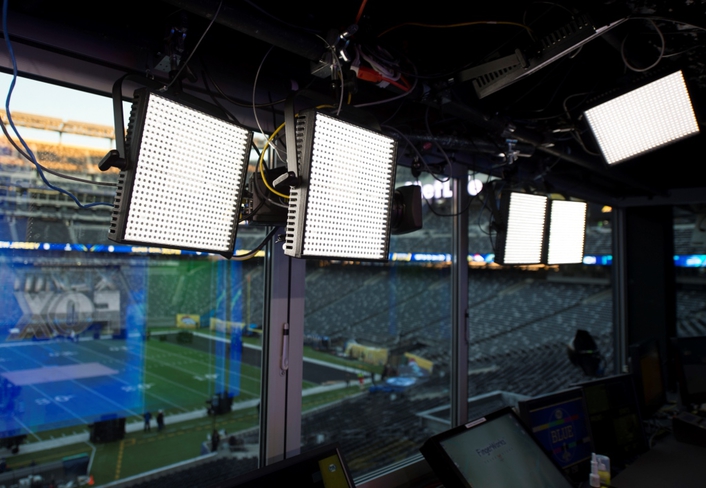 “It was really nice to have a Bexel person right there if we needed them,” Davies said. “Thankfully, we didn’t. In fact, there were no major problems on this project, on either side of the Hudson River, and that’s all due to the fine engineers and production staff that made it happen. There were extensive logistics that were sorted out between Bexel and Game Creek Video, the production company that supplied the mobile facilities in both Times Square and MetLife Stadium. It was good seeing everyone working together for the benefit of fans around the world.” 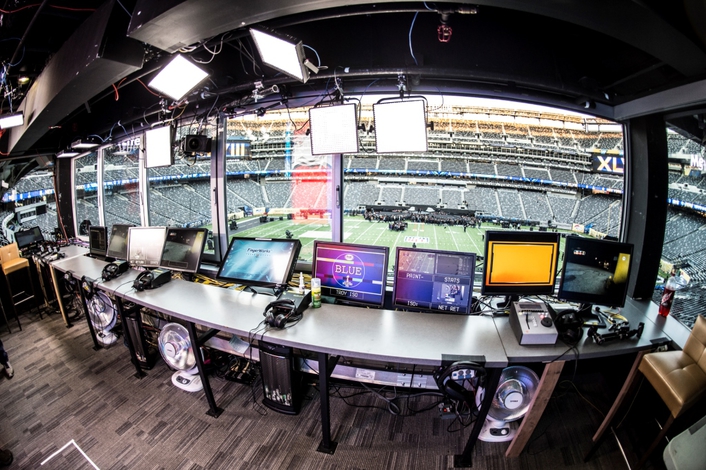 For all the teleprompter needs, Autoscript was at the studio positions at MetLife and Times Square. Designed with purpose, the Autoscript prompting software allowed for essential updates during the game.

Vinten 750 heads and Quattro pedestals, provided by Game Creek, were at each site, smoothly capturing the game action and reports from the studio.

Sachtler systems, using Anton/Bauer batteries, were used by mobile crews to capture viewers’ opinions out in Times Square. Sachtler gear allowed the crew to set up and capture the moments quickly, while providing a sturdy foundation. Anton/Bauer’s RealTime display provided reliable mobile power, helping operators monitor the batteries’ charges, so they didn’t have to worry about stopping in the middle of a crucial take to swap out the battery.