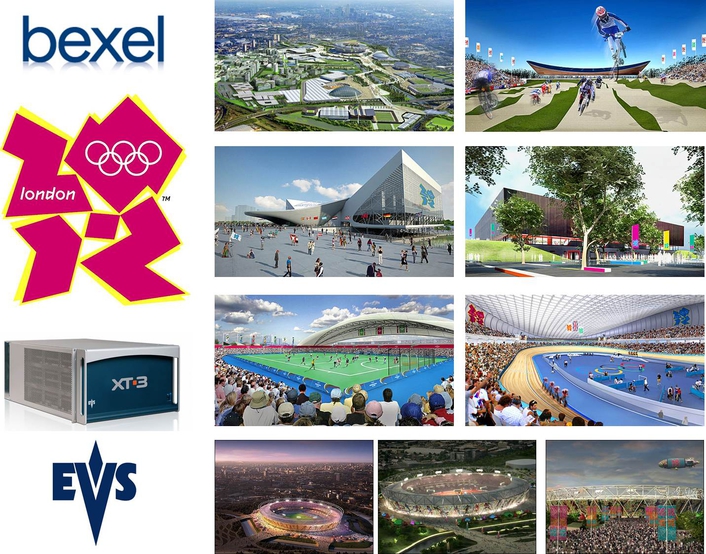 In Preparation for 2012 Olympics, Bexel Begins Inventory Upgrade
Bexel, a unit of the Vitec Group's Services Division, recently became one of the first American companies to integrate EVS’ XT3 new generation of live production servers, featuring up to eight channels with additional SAS storage (2RU X-SAS-HDX with 24 drives), into its product inventory. Specializing in broadcast equipment rentals, Bexel is an important EVS systems rental operator in the U.S.

Currently owning a fleet of more than 40 XT EVS servers, Bexel is the first company on U.S. soil to have acquired the new third generation of XT servers.  Bexel has over 30 years of experience providing broadcast equipment solutions and engineering to high-profile events worldwide.

Bexel has utilized EVS products in a wide variety of production workflows including the top live entertainment and award shows, as well as the leading large live sporting events around the globe.  With the London 2012 Summer Olympic Games approaching, Bexel has already begun to upgrade its EVS inventory to the new hardware and software platforms. The new EVS technology is essential for covering the fast-paced, action-packed, technically demanding TV programs and special televised live events—such as the Olympics.

EVS recently introduced the eight channel XT3 server exclusively at the 2011 NAB Show in Las Vegas this past April.  The new server opens the door to future productions requiring flexibility to work in a multi-codec, multiple resolution, 2D/3D environment while being able to increase the infrastructure capacity with more channels.  The new generation of XT servers is said to have a significant number of improvements from previous versions meeting the most demanding live and near-live production requirements.  Among the features, there is an increase of supported audio and video channels, more bitrates per video channel and the recording of up to two triple-speed Super Motion feeds per server.

“EVS’ system is ideal for live production operations and remains the only choice for such assignments,” says Craig Schiller, vice president and general manager of Bexel. “EVS goes the extra mile while genuinely understanding field requirements in the U.S. market to meet broadcast management demands for productivity improvement.” Schiller continues to say that “EVS’ skilled personnel are always available to provide quality service and support while teaming up with Bexel to continually improve the performance level of live events.”According to Fred Garroy, general manager of EVS Americas, “Bexel has maintained a long-term relationship with EVS while remaining a key customer of the company. EVS is proud to sustain a renewed confidence while striving for mutual success with Bexel.”