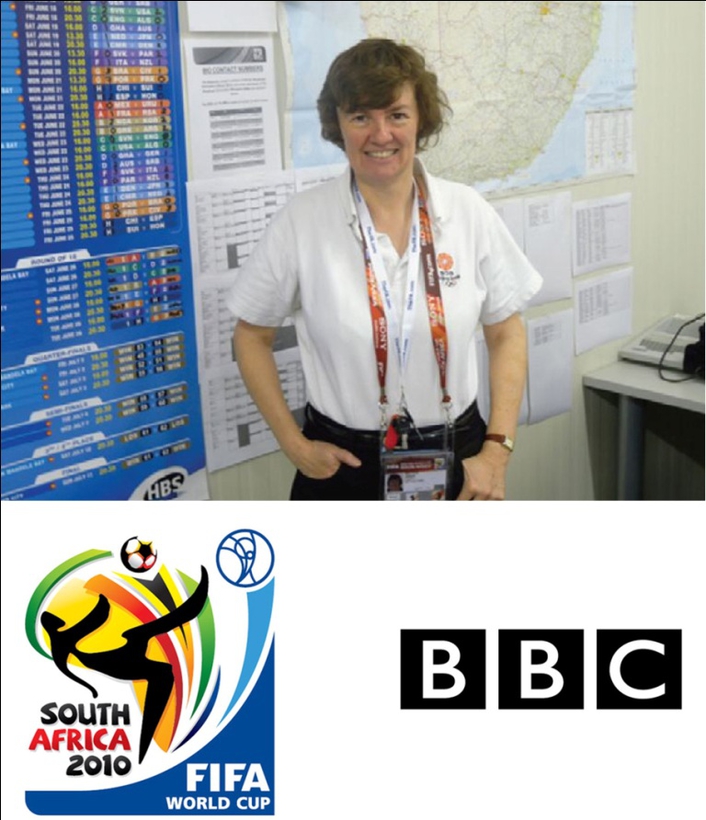 BBC Radio and Joanne Watson - heard across the world
Just over 50 personnel for all pro­gramming provide the ears and voices to BBC Radio’s presence in South Africa. “We have one studio on site at the IBC,” says Joanne Watson, Planning Editor for BBC Radio, “but, apart from the odd ‘eclectic’ show, like [radio football pundit] Danny Baker’s, most of our coverage has been from the ven­ues and outside the IBC. We have a breakfast show which is follow­ing the England team, and will stay with them for as long as they are in the tournament.”

Joanne explains that the minimal time difference between home and host and the prevalence of spoken English, along with the sense that there are a number of big expat communities from many nations in South Africa, have been a great help in production. “However, the logistics of following a team that has constantly been on the move has kept the BBC on its toes,” Joanne adds.

Programming does extend beyond pure match coverage. BBC Radio have held a number of simultaneous phone-ins with South African radio stations and have also produced programming featuring the Citizen Journalists, local individuals who have been watching the progress of African nation teams, as well as features produced by the ‘Boogie-Bus’ - a pan-BBC project involving a bus travelling from Cape Town to Johannesburg.

“We have also been running a programme through the World Ser­vice,” Joanne continues. “We provided two weeks of intensive train­ing for African commentators to follow their teams and provide com­mentary alongside the World Service commentary in English at those games.” BBC are planning to continue this now that the group stage is over, with African co-commentators being used at today’s M51, Germany v England.

“The number of African players that now play outside of the conti­nent coupled with the interest in the English Premier League really ex­tends the scope of our audience,” Joanne says. “The domestic mar­ket stretches across the Commonwealth, from Canada to Australia alone. When one takes into account the World Service programming – wherever football is played the relevant language service is provided – the numbers are mindboggling!”