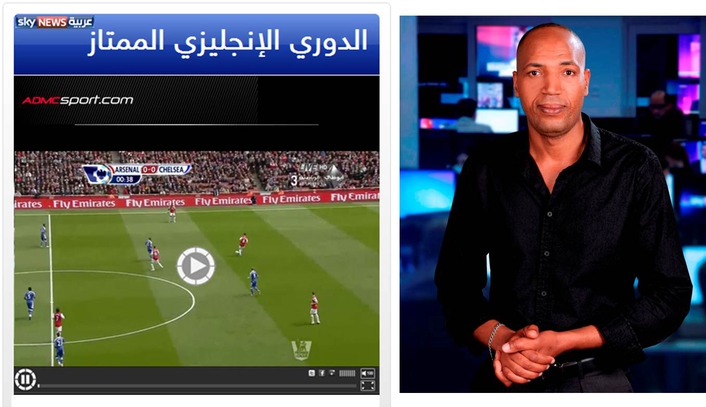 Sky News Arabia will broadcast the league highlights as part of a wider deal with Abu Dhabi Media, which owns the exclusive broadcast rights to the Barclays Premier League in the Middle East.

Ali El Garni, Sports Editor at Sky News Arabia commented: “The Barclays Premier League is undoubtedly one of the top football leagues in the world and it has a huge following across the Arab world. I couldn’t be more excited about bringing the league action to our viewers to be able to engage with Arab football fans through Sky News Arabia’s multimedia platforms.”

“Sports – and football in particular – is huge in the Arab world, so it was crucial for Sky News Arabia to have a strong line-up. With the sports team in place, with the Barclays Premier League agreement and with the ability to broadcast on multiple platforms from day-one I can confidently say that we have an unparalleled offering that I’m sure our viewers will enjoy,” Nart Bouran, Head of Sky News Arabia, explained.

In addition to the highlights available on Sky News Arabia, fans are also able to watch all 380 Barclays Premier League matches in their entirety, in premium high definition, live and exclusive on Abu Dhabi Media’s AD SPORTS channels.

Mohammed Najeeb, head of Abu Dhabi Al Riyadiya Channels – Abu Dhabi Media’s sports broadcasting department, commented: "The Abu Dhabi TV Network is proud to offer our viewers live and exclusive coverage of the entire Barclays Premier League season in world-class HDTV across our AD SPORTS channels. Our new partnership with Sky News Arabia will allow us to further extend the reach of the league to even more viewers across the Middle East with these new game highlights.”

Sky News Arabia will be covering the last match of the current Barclays Premier League season directly from the Etihad Stadium on Sunday, May 11, 2012. Viewers wanting more information can visit www.skynewsarabia.com, or visit the on AD SPORTS can visit www.adtvnetwork.com to watch the matches in full.

Sports fans can also tune into Sky News Arabia for extensive coverage on various major sports events, including the London 2012 Olympics, and the  Euro Cup 2012 which will take place this summer.

About Abu Dhabi Media
Abu Dhabi Media is one of the fastest growing, multi-platform media and entertainment organizations in the Middle East, operating across the broadcast, publishing, and digital media sectors.The company manages over 20 market-leading brands in two categories: brands that serve the UAE through a defined public service role; and brands that target the wider Arab world with clear commercial objectives. Abu Dhabi Media maintains partnerships with a number of leading companies in the international media space.Abu Dhabi Media also owns and operates subsidiaries in film, outdoor broadcast, and printing.

About Sky News Arabia
Sky News Arabia is a free-to-air 24-hour Arabic rolling news channel reporting the news as it happens in HD. Set up as a joint venture between Abu Dhabi Media Investment Corporation (ADMIC) and British Sky Broadcasting (BSkyB), Sky News Arabia is based in Abu Dhabi and will broadcast to over 50 million homes in the region. It aims to deliver fresh, fast and independent news from across the Middle East and North Africa (MENA). The channel delivers the news across multiple platforms including online and mobile devices to provide fast news on the go.