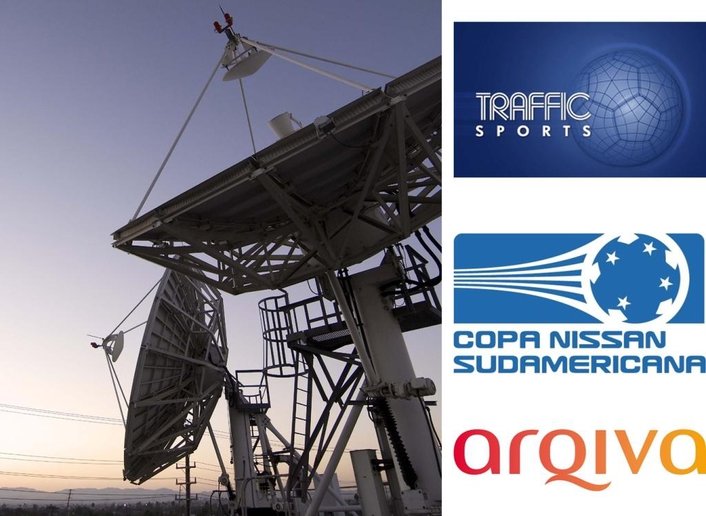 • Brazilian sports programming powerhouse chooses Arqiva for Satellite Distribution and Teleport Services on five continents
Arqiva, the communications infrastructure and media services company, has announced that it has closed a multi-year agreement with Traffic Sports International to support global distribution of its seven international soccer leagues. Via Arqiva, the television rights holder to Latin America’s key soccer tournaments will reach TV households throughout the Americas, Europe, Asia and the Middle East beginning with the August 4th transmission of the first Copa Sudamericana soccer match.

“This is our first multi-year contract with Traffic Sports International and a major expansion of our relationship with the organization,” said Jon Kirchner, EVP, Arqiva Satellite & Media, from the company’s Washington, DC offices and teleport. “Arqiva’s global satellite, fiber and teleport infrastructure is the ideal distribution platform for Traffic Sports International as it continues to provide premier sports programming around the world.”

The seamless, five-continent deal utilizes Arqiva’s award-winning teleports, satellite capacity and international fiber. Originating out of Brazil, each event is downlinked off satellite using Arqiva’s Los Angeles teleport and then sent via Arqiva’s international terrestrial fiber network to its Washington, DC teleport. The feeds are on-passed to Arqiva’s UK Winchester teleport for distribution over Europe using the W2A satellite. From the UK, the feeds are then turned around from W2A to Telstar 10 for distribution over the Middle East and Asia. Subsequent tournaments will also be distributed to Africa via Arqiva’s infrastructure.

“We entered into our relationship with Arqiva due to the quality of their service and the strong recommendation of our clients who use them extensively,” said Antonio Paulo Simoes, director of TV7, Traffic Group’s division that manages all World Cup qualifying transmissions and footage. “We look forward to growing and expanding with them as we reach world-wide soccer fans.”

Terrestrial Broadcast provides transmission for all UK terrestrial TV broadcasters, including the new networks being built for the Digital Switch Over. Transmission is also provided for BBC Radio and most commercial radio stations, both analogue and DAB. The company owns and operates two of the six UK digital terrestrial TV multiplexes, enabling major media companies to bring their TV and radio services to Freeview.

Satellite & Media provides global communication platforms to enterprise, government and broadcast customers around the world. It owns and operates teleports at key locations including Los Angeles, Washington, London and Paris, as well as comprehensive satellite capacity, an international terrestrial fibre network and extensive media facilities. These enable Arqiva to provide world leading organisations with a comprehensive range of services to deliver their data, broadcasts and media across the globe.

Wireless Access provides cellular, wireless broadband, voice and data solutions for the mobile communications, public safety, local government, and commercial markets. Arqiva is the largest independent provider of radio sites in the UK and Ireland. With its own spectrum, the company can provide complete mobile communications networks including backhaul links.

Arqiva has its headquarters near Winchester, with other major UK offices in London, Warwick, Buckinghamshire and Yorkshire and international offices in the USA, France and Italy. Customers include major broadcasters such as the BBC, ITV, BSkyB and the independent radio groups, major telco providers including the UK's five mobile network operators, and the emergency services.

Arqiva HD OB7
MTV renews Arqiva’s uplinking of two transponders
Arqiva is using its IS805 platform to distribute 28 FA Cup soccer matches, from the UK to the Americas for ESPN