.
Virtual graphics are more and more popular in TV coverage of major sporting events and Euro 2012 is a clear demonstration for that. DELTA-highlight from DELTACAST is an analysis system that is being used during games to highlight specific players, trace their movements, show the distance of the ball from the goal prior to free kicks, indicate shot speeds, magnify areas of play…

The DELTACAST touch screen technology on top of the DELTA-highlight allows the presenter to select, play video sequences and add drawings thanks to a very user-friendly interface. Three broadcasters have used DELTA-highlight during Euro 2012 : ARD in Germany, RTBF in Belgium and BTV in China.

ARD has been using DELTA-highlight on ARD Sportschau, the broadcaster's weekly Bundesliga football highlights programme, for the last two years, and for the UEFA EURO 2012 DELTACAST has built an upgrade with newly implemented features in order to provide a high-quality solution for pre and/or post-match analysis. The system was also used during matches to highlight specific players, trace their movements, show the distance of the ball from the goal prior to free kicks, and magnifying areas of play to show what actually happened in an incident. 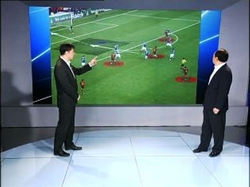 At BTV the generated analysis video files were being used during the studio sequences when the anchorman is discussing the match with the expert, either before the match starts, with files from the last matches, or at half time or post match using material from the current game.

Rather than using a large touch screen placed in the studio, RTBF has preferred using a tablet as interface, making soccer experts very comfortable for analysing the major scenes of the games.