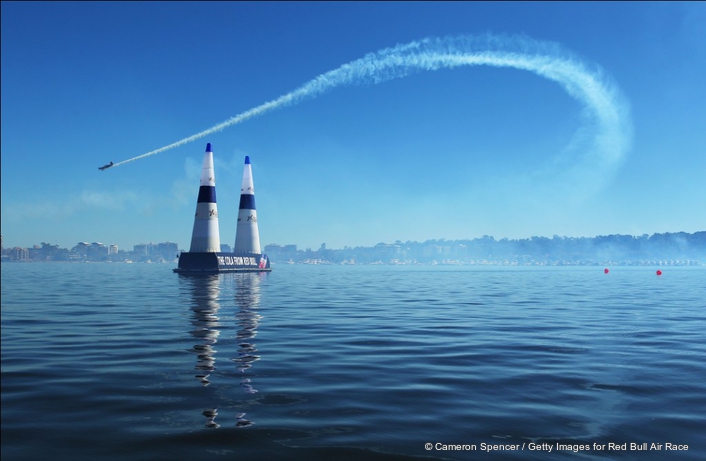 Paul Bonhomme of Great Britain in action during the Red Bull Air Race Day on April 18, 2010 in Perth, Australia.
PERTH - Hannes Arch of Austria won the Red Bull Air Race on Sunday with Matt Hall of Australia getting a career-best second place in front of an enormous crowd of 140,000 watching from the banks of the Swan River in Perth, Australia. Championship leader Paul Bonhomme of Great Britain took third place.

Bonhomme retains the overall championship lead with 22 points after the first two races of the 2010 season. Nigel Lamb of Britain, who was fourth on Sunday, is in second place on 18 points. Arch jumps into third place overall with 14 points and Hall moves up to fourth, also on 14 points.

It was a thrill-filled final under brilliant blue skies with Hall starting out the Final 4 by laying down a fabulous time of 1:26.51, his best of the week. It was all the more astonishing considering the huge expectations from the home crowd, the biggest at a sporting event in Australia this year.

Lamb had been posting strong times all week but couldn't top Hall's time. Arch, starting third, moved into the lead with a time of 1:26.03. Bonhomme was flying well and poised to win the race but stumbled in the fourth and final sector to fall to third place with a time of 1:26.82.

Another success story in Perth was Pete McLeod, who took a strong fifth place. It was also a career-best for the Canadian ace who had struggled at the bottom of the pack in his rookie season last year with a comparatively slow plane. Nicolas Ivanoff of France, who won the Perth race in 2007, was sixth. Matthias Dolderer of Germany was seventh.

It was a disappointing race for Americans Kirby Chambliss and Michael Goulian. Chambliss, who clinched his 2006 world championship here in Perth, was back in eighth place and Goulian, who was fourth in the season-opener last month in Abu Dhabi, could do no better than 11th place when he sliced open a pylon in the Top 12 round.

Arch's triumph in Perth helped erase memories of his disappointing 11th place in Abu Dhabi last month due to a disqualification in the Top 12. The 12 points Arch collected for the win in Perth, after a mere 2 in Abu Dhabi, puts the 2008 championship winner back into the title hunt. The Austrian was seen flashing a wide smile in his cockpit when the times were read out to the four finalists by the Race Director.

“This is definitely the way we're going forward,” said Arch. “Everything starts with vision and this was my vision. I was really struggling during the week. Should I attack or should I just slow down? I'm very pleased.”

“Fantastic result,” said a clearly delighted Matt Hall, whose best result was third place in Porto last year as a rookie. “I've been aiming for that for over a year. The Perth race was always going to be my focus. This is what I’ve been looking forward to since I started in the Red Bull Air Race – a great performance in front of my home crowd in Australia.”

Bonhomme, who has now been on the podium for nine straight races going back to the 2008 season, was clearly disappointed. “Third place wasn't planned but we didn't get fourth so that's good,” said Bonhomme. “I've not really looked at the times so I don't know what I did wrong. But it sounds like I relaxed a bit in the track.”

The next race takes place in Rio de Janeiro, Brazil on 8/9 May. 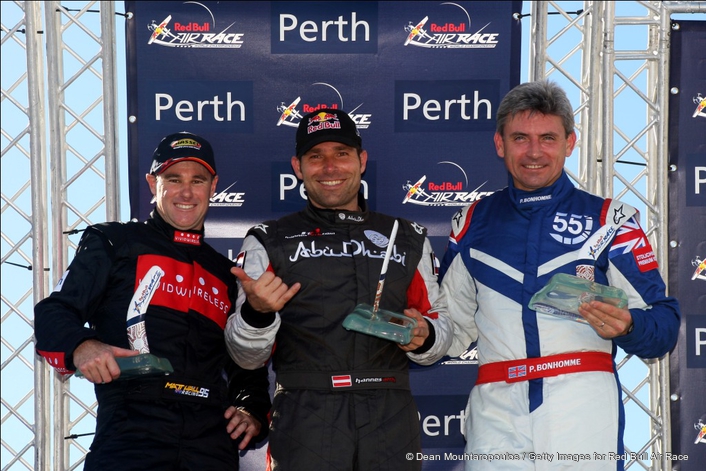 (L-R) Matt Hall of Australia celebrates his 2nd, Hannes Arch of Austria his 1st and Paul Bonhomme of Great Britain his 3rd place