Arch Top of Town in New York with Qualifying Victory 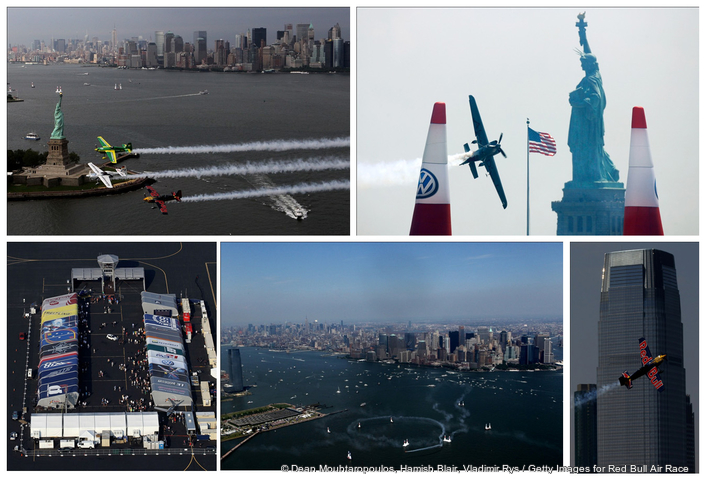 Action on the Hudson River during the Red Bull Air Race New York Training Day on June 18, 2010 in New Jersey.
Austria’s Hannes Arch qualified fastest for the first-ever Red Bull Air Race in New York on Saturday and collected one championship point that cut Paul Bonhomme‘s lead at the top to just one point before Sunday’s race. Canada's Pete McLeod took a remarkable third place on the turn-filled track on the Hudson River, between the Statue of Liberty and Manhattan skyscrapers. Americans Kirby Chambliss and Michael Goulian were in strong position for Sunday in fourth and fifth place, respectively.

In front of a Qualifying Day crowd of more than 40,000 spectators lining the shores of Liberty State Park in New Jersey and New York, Team Abu Dhabi’s Arch clocked the 5.5-km track of 13 Air Gates in 1:08.18, setting a track record on his first run. Despite a penalty-marred second run, Arch‘s time was still good enough to hold off Bonhomme’s strong challenge. The defending champion from Britain was 0.80 behind Arch in Qualifying 1 and cut the gap to just 0.52 seconds with his faster second run later on when he hit speeds near 230 mph. Bonhomme leads the championship with 41 points while Arch has 40. 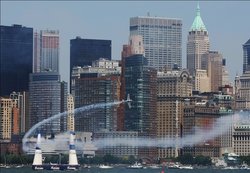 “Paul’s times are so close,” Arch said, delighted to cut Bonhomme’s lead with the Qualifying victory and eyeing a record four straight wins on Sunday. “I hope he gives me more room tomorrow so I won't be so stressed. You have to fly on the limit but clean. I think that's the key: just focus and stay calm tomorrow." Bonhomme was disappointed he could not win the one Qualifying point despite the massive effort on the increasingly windy track but he sounded confident he could win the big prize -- 12 points for first place. – on Sunday. Bonhomme has a record-breaking 11 straight podiums going back to the 2008 season. 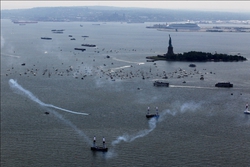 "I think the positives we should take out of this is that we improved our run while Hannes got worse,” said Bonhomme. “And that's a good thing. Clearly that's a point that we'd rather have.“

It was an exceptional day of high-speed, low-altitude racing for the two Americans -- Chambliss and Michael Goulian. They had struggled in the first Qualifying session but raised their game in the second session even though winds picked up. Both Chambliss and Goulain have said flying past the Statue of Liberty and the New York skyline has been a highlight of their careers. 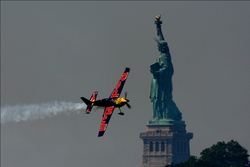 "It's great when a plan comes together,“ said Goulian, who is from Massachusetts and had a big fan following in New York. “That’s not bad for Qualifying. But we will need some bigger guns for tomorrow.“

But Saturday was a day of disappointment for Britain’s Nigel Lamb (7th), Germany’s Matthias Dolderer (8th), Spain’s Alejandro Maclean (10th) and France’s Nicolas Ivanoff (11th). Lamb was a pre-race favorite with his MXS-R race plane that was thought to be ideally suited to the turn-filled New York track and finished first in the final training session on Friday. Ivanoff, clearly elated to be flying past the Statue of Liberty that was a gift from France, was a strong second on Friday before falling to 11th on Saturday.