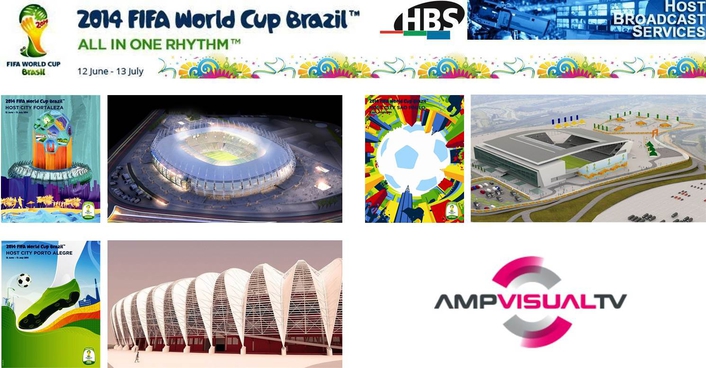 AMP VISUAL is responsible for the broadcasts from Fortaleza, Porto Alegra and Sao Paulo
AMP VISUAL TV will be one of the four service providers, and the only one from France, covering the footballing event of the year, providing broadcasts from three stadiums: Sao Paulo, with the opening ceremony and first match, Porto Alegre and Fortaleza.

As a broadcasting partner to Host Broadcast Services (HBS) for the 2014 FIFA World Cup, Sony is responsible for covering all of the HD needs for each of the Brazilian sites. HBS and Sony took great care when choosing their service providers from a selection of the very best, and AMP VISUAL TV was chosen for the quality of its equipment and teams, and its track record at major events.

Services for three sites
AMP VISUAL TV will cover broadcasts from cluster D, a grouping that will see twenty matches, including a semi-final, played in three stadiums: Sao Paulo, Porto Alegre and Fortaleza.

The company responsible for this cluster will be involved in the very first moments of the tournament, moving from the opening ceremony to the first match in just a few seconds (with a complex equipment change). The cluster will be managed by two French directors: Jean-Jacques Amselem and François Lanaud. 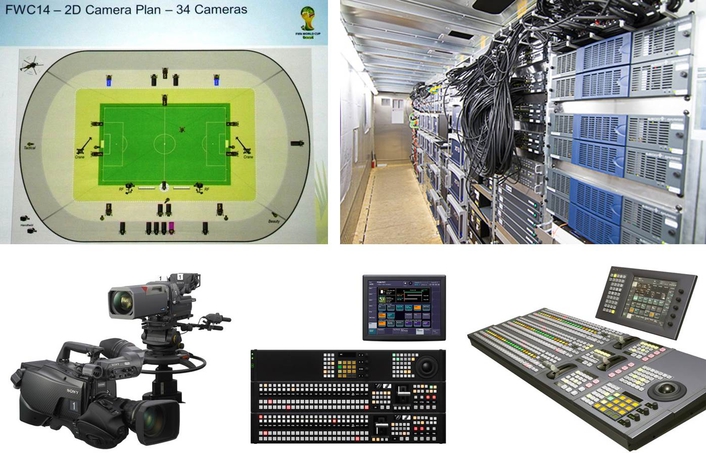 One of the particularities of the 2014 FIFA World Cup is the range of services available to broadcasters. In addition to the international feed, each broadcast will include eight packaged flows for a custom broadcast or second-screen content. Thus, the equipment used for each match - the same throughout the tournament - will include 37 cameras and three mixers. Given the competition calendar, AMP VISUAL TV will need 50 cameras to cover its broadcasts.

To provide the necessary level of service and seize the opportunity to add to its range of equipment, AMP VISUAL TV has invested in three mixers (SONY MVS-3000 and MVS-7000x), and 30 brand new SONY HDC 2400 cameras.

A seasoned team
70 staff are involved in the event. Following three days of training in Germany, the first technicians headed to Brazil in mid-May to set up the OB trucks, and were joined by the rest of the team at the end of the month. Technicians in cluster D will split in to two separate teams in order to cover matches at the three stadiums.

Our teams are perfectly accustomed to the task at hand, working year-round on this type of project that demands technical excellence as well as excellent production and logistical expertise.

Gilles Sallé, the CEO of AMP VISUAL TV: "Even though we were involved in Germany in 2006 and South Africa four years ago, when it comes to 3D shooting we are still just as proud to be involved in such an adventure. The FIFA World Cup is without a doubt the world’s largest sporting event, and the Brazil World Cup will be an exceptional event.
It is a great responsibility that we will treat as seriously as we will enthusiastically.”

AMP VISUAL TV imagines, build and operate shooting, transmission, enhancement, storage, second screen and broadcasting solutions for TV coverages. AMP VISUAL TV is one of the European providers in TV sport coverage, as well as one of the world's leading providers in motorsport.
AMP VISUAL TV provides technical services for TV filming in outside locations (video-mobile resources) or in studios. As a specialist in High Definition filming, RF broadcasting and UHD filming, AMP VISUAL TV is acknowledged for its expertise in the fields of sports, live shows, reports, special operations as well as variety, games or entertainment shows. With 20 studios, 30 OB vans – one of the largest fleets in Europe – and 6 “flight case” studios, AMP VISUAL TV’s more than 400 employees produced 14,500 hours of content last year.