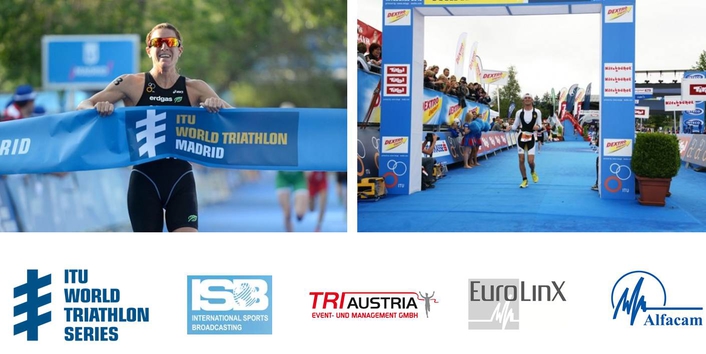 .
This year's ITU World Triathlon Series will take place from April till October 2012 in 8 different countries. Alfacam and its daughter wireless company Eurolinx cover 2 of the 8 competitions : Madrid in co-production with ISB TV and Kitzbühel in co-production with Tri Austria Event- und Management GmbH.

Created in 2009, the ITU World Triathlon Series is an innovative series that allows the world’s top athletes to compete head-to-head on an ongoing basis. Expanding upon the previous single-day World Championship, the format features seven world-class events and finishes with a Grand Final. The 2012 Series kicks off in April in Sydney and ends up in Auckland in November 2012.

Alfacam, the Belgian company delivering services to TV stations and production houses, and its daughter wireless company Eurolinx were this year chosen by the producer ISB TV in Madrid and the organizer Tri Austria in Kitzbühel to cover 2 of the 8 competitions.

The series in Madrid was covered in May 2012 in co-production with the Spanish production house ISB TV. The series in Kitzbühel (23-24 June 2012) will be produced by Alfacam & Eurolinx for the event organizer Tri Austria Event- und Managament GmbH. For each event, 1 OB XXL truck, 1 OB RF wireless truck (OB 8), 2 moto’s and 1 helicopter are used for the production. A team of 30 persons including 7 wireless engineers of Eurolinx are present during the events.

Eurolinx is today a key player in the wireless HDTV transmission domain and is able to fulfill any requirement for high-tech and advanced wireless connections. The company is specialized in SNG satellite services and the wireless transmission of HD-images over short, medium and long distance through airplane, helicopter, moto or onboard for sports events like cycling, marathons, triathlons, sailing, speedboat-, car- and motor races.

About Alfacam Group
Alfacam Group [EURONEXT Brussels: ALFA] groups the activities from Alfacam, EuroLinX and Euro1080 (EUROCAM MEDIA & FILM CENTER & HD1).
Alfacam primarily delivers services to TV stations and production houses and with 22 HD production vans the company comprises the largest HD OB fleet in Europe. Alfacam undertakes more than 3000 assignments each year, including all Games since 2002 (with 19 OB vans in Beijing 2008 and in Vancouver 2010), the European Championships Football and the Football World Cup (for instance South Africa 2010), the Europe Music Awards and the FIFA Confederation Cup Football. More than 95% make use of HDTV technology. Alfacam also undertakes 3D recordings across a range of content from concerts to sports (for instance ROLAND GARROS tennis, box, cricket, football/soccer).
Eurolinx is the sister company of Alfacam, offering wireless services to TV stations and production houses.
Euro1080 regroups the play-out services for TV stations, 16 studio’s (for television, film, event) and a « business center » (Eurocam Media Center/Eurocam Film Studios) and a catalog of cultural content in HD, « HD1 ».