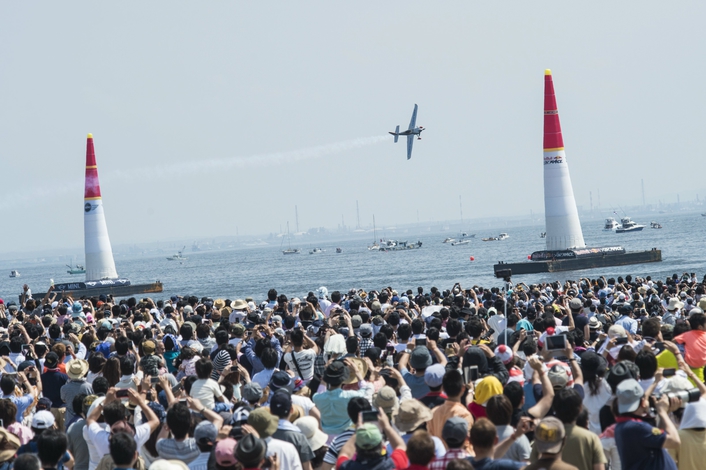 The only Red Bull Air Race stop in Eastern Asia – Chiba, Japan – serves up volatile open-water conditions and crowds that are crazy about motorsport. Factor in the intense pressure on pilots as the World Championship battle nears its halfway point, and this June the skies of Tokyo Bay are set for some of the most heart-pounding action of the season.

The Red Bull Air Race in Chiba, Japan on 4-5 June – just the second ever in Eastern Asia – has all the ingredients for high drama. Facing what is already the third stop in the eight-race season, the 14 elite teams will be desperate to keep the World Championship points gap from getting any wider. They’ll have their work cut out for them: Chiba is the only 2016 race-track over open water, and the winds and sweltering heat of the rainy season are on the way. Pylon hits and penalties could shake up even the best-laid plans.

Quick Facts:
Last year, the weekend’s sold-out crowd of 120,000 on Makuhari Beach went wild for home country hero Yoshihide “Yoshi” Muroya from Fukushima. He set the Chiba track record (50.779s) in 2015 but ended up in eighth place. He’ll be looking for sweet redemption

Chiba’s second and third-place finishers last year – Australia’s Matt Hall and Germany’s Matthias Dolderer – will have contrasting agendas. Coming off his first-ever race win in April, a confident Dolderer is at the top of the World Championship leaderboard. Hall, last year’s runner-up for the overall title, has had an underwhelming start to the season, due most recently to a back problem; but Aussie seems much improved and has huge potential to shake up the standings

Austria’s Hannes Arch, the 2008 World Champion, is third overall and narrowing in on the Frenchman only seven points ahead of him, five-time race winner Nicolas Ivanoff.

Japan has taken the Red Bull Air Race to its heart, and in Chiba last May, the debut of the world’s ultimate motorsport series in the sky was an instant classic. A perfect storm of exciting elements started with a breathtaking weather event, as Typhoon Noul blew into Tokyo Bay and scrambled Race Week preparations. Even when the skies cleared, the winds changed moment by moment, and the crowd gasped as pilot after pilot grazed and burst the racetrack’s 25-meter pylons at speeds up to 370kmh. With this year’s return to Chiba scheduled even later, in June, the airborne action is sure to be heated and turbulent.