AGIPI Billiard Masters 2013: Through the Eyes of a Champion with ATEM

The AGIPI Billiard Masters is one of the biggest events in cue sports. This year’s tournament saw the world’s elite of three cushion billiards duke it out for the championship title. For those not familiar with the sport, it involves a table with no pockets, and the player has to make contact with two other balls while hitting at least ‘3-cushions’ in the process.

Growing in popularity, the audience of the Masters has doubled in the last year and is now broadcast to more than10 million viewers. International broadcasters include Eurosport, Eurosport2, ESPN3, Mezzo France and MTV France.

To broadcast the 2013 Masters live in full HD from Schiltigheim in France, Eurosport producers partnered with French OB production company Le Kar to broadcast more than 15 hours of live television programming for Eurosport.

A Champions View
In addition to a top of the line OB solution, the Le Kar team pride themselves on having a very tailored set of skills, giving them a rather unique take on the sport.

Xavier Delpech explains: “The production crew all have a connection with the sport. We either simply love the game, or we were a part of it at some point in our lives. One of our cameramen was a European Champion in his playing days, and the production director was also a champion. So essentially viewers get to see the sport through the eyes of a champion, which is pretty unique.”

Having a connection to sport is important, said Xavier: “it is much easier to find the right angle, or to show the perfect position when you understand how the sport works and what a player might be thinking. That ability to anticipate what could happen is one of our USPs.”

Affordable HD Quality
Although the Masters has an international following, producing HD content for billiards comes with an extra set of financial challenges, according to Delpech“Unlike football or other more popular sports, billiards doesn’t dedicate big budgets for television production. We believe that all sport, no matter how big or small, should be broadcast in HD. And thanks to Blackmagic Design, we have been able to realize that belief with a broadcast quality OB Truck,” says Delpech.

During the course of the tournament, the Le Kar team deployed their HD OB Van  operating a multi camera setup comprised of six HD SDI cameras. The HD SDI feeds were converted to optical fiber via an ATEM Camera Converter and transmitted to the SNG van. The signal was then converted back to SDI using an ATEM Studio Converter before being routed into the Blackmagic Design ATEM 2 M/E Production Switcher via a Blackmagic Design Broadcast Videohub. Xavier controlled the switcher via an ATEM 2 M/E Broadcast Panel, allowing him to mix the live feed and add video FX. The final program was output in 1080i 50.

“The ATEM 2 M/E switcher gives us more inputs, more options and great transition effects, which we didn’t have access to previously. For the Masters, we only used nine inputs in total, however it was important for us to have a switcher with additional capacity as some of the larger multi cam OBs we do demand it,” said Xavier. All audio signals are de-embedded using SDI to HDMI Mini Converters for the audio mixer inputs. 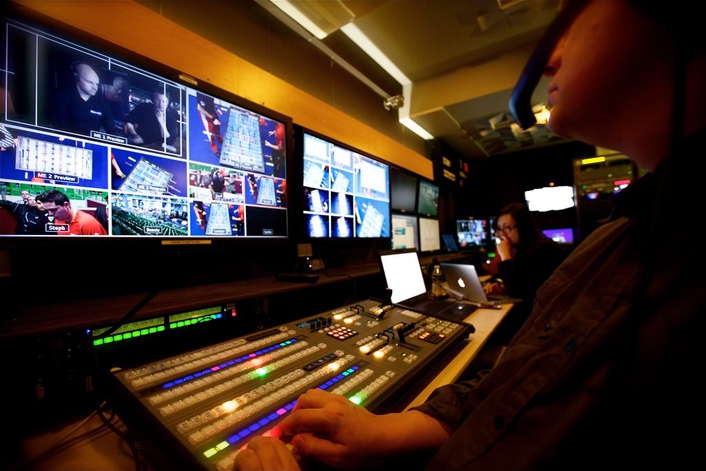 A Top Performance
In total 15 hours of final programing was captured by the SNG truck (150m away) for Eurosport and Eurosport 2. In addition to transmission Depelch and his team to store the footage so that it could be uploaded online.“For this we used eight HyperDeck Studio Pro SSD recorders, which provided us with timecode support and XLR inputs for capturing the audio,” recalls Xavier. Using the HDMI output on the HyperDeck Studio Pro, the final program output was ingested via a PC over USB 3.0 and subsequently encoded to H.264 for online streaming to Kozoom.com.

“We have been building this OB SNG truck for more than four years now, so it’s great to see it in action on an international sporting event like the Billiard Masters. We were so impressed with the performance of the kit we installed from Blackmagic and the quality that we are now able to work in,” concludes Xavier.